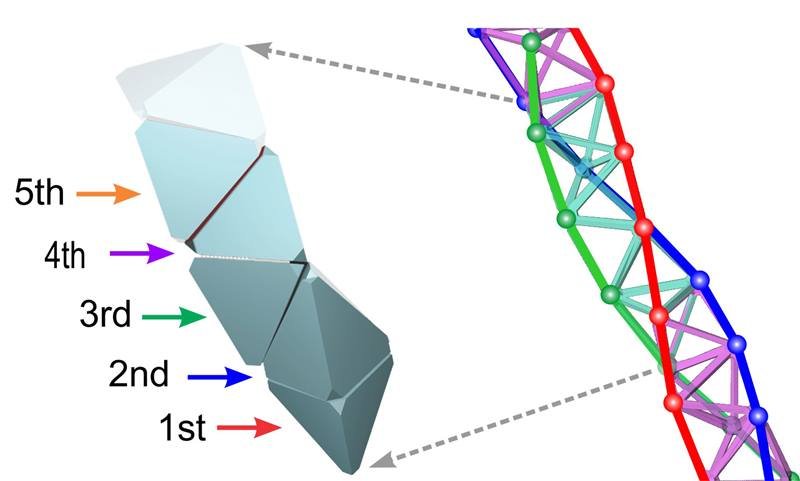 On the left, a computer model depicts a self-assembled tetrahelix made up of tetrahedral quantum dots. On the right, a skeleton view of the tetrahelix demonstrates the chiral structure of the assembly.

If you’ve ever packed up your kitchen, you know that the shape of the items affects how they fit together in a box. The same is true when it comes to packing tiny particles together. The shape affects how the particles fit together and, in turn, the resulting material. For the first time, a team observed the self-assembly of nanoparticles with tetrahedral shapes. The particles formed into three distinct structures when prepared under different conditions. The team achieved unprecedented detail in characterizing the structures.

Scientists have studied how round nanoparticles organize into structures. Here, the team looked at more squared-off particles. This study demonstrates basic packing strategies for such tetrahedron-shaped nano-objects. Seeing how such particles behave may make it easier to create spirals and other complicated shapes that could result in materials with never-before-seen properties.

Packing density is an important feature when it comes to nanoparticles, and researchers have developed mathematical constructions of tetrahedral shapes suggesting they have the lowest packing density of any convex shape. For the first time, scientists have experimentally observed and characterized the self-assembly of tetrahedral quantum dots into different structures. An international scientific team including scientists at the Center for Nanoscale Materials (CNM), a U.S. Department of Energy (DOE) Office of Science User Facility at Argonne National Laboratory conducted the research. The team synthesized quantum dots made from cadmium chalcogenide (where chalcogenide refers to sulfur and related elements) and characterized them using several capabilities including CNM’s high-resolution scanning transmission electron microscope. The images obtained allowed the scientists to confirm the quantum dots’ tetrahedral structure. The researchers also used the Cornell High Energy Synchrotron Source (CHESS) for X-ray characterization of the dots to fully elucidate their structure.

Using different levels of concentration of the nanoparticles, specifically quantum dots, in solution, the researchers found that the dots self-assembled into structures of one, two, and three dimensions with one common structural feature—the faces of the tetrahedrons tended to stick to one another. Solutions with low concentrations of the quantum dots formed one-dimensional spiral linear superstructures, or clockwise/counter-clockwise spirals, with joined faces. Evaporating solutions with high concentrations of quantum dots led to the formation of sub-millimeter, three-dimensional crystals. The X-ray scattering experiments showed that these quantum dots first formed clusters with face-to-face contact and then packed into the crystals as they reached a steady-state equilibrium. Finally, a medium concentration of the quantum dots in solution led to a two-dimensional thin film in which the tetrahedrons also displayed the face-to-face affinity. This information expands the collection of superstructures with tetrahedral building blocks and brings the spontaneous formation of nanocrystal assemblies to a higher level of complexity.

This work was performed, in part, at the Center for Nanoscale Materials, a Department of Energy Office of Science user facility at Argonne National Laboratory. This research was supported by the Brown University Startup Fund, the Salomon Award Fund, the Institute for Molecular and Nanoscale Innovation Seed Fund, and a University Affairs Committee grant from the Xerox Foundation. The Cornell High Energy Synchrotron Source was supported by the National Science Foundation. Some transmission electron microscopy and scanning electron microscopy measurements were performed at the Electron Microscopy Facility in the Institute for Molecular and Nanoscale Innovation at Brown University.