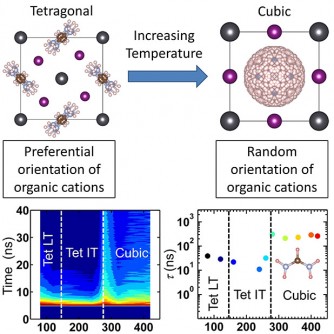 The atomic structure of organic-inorganic perovskite transitions from a tetragonal structure (top left) to a cubic structure (top right) upon heating. Black and purple spheres represent lead and iodine atoms, respectively. Also shown are the positively charged organic molecules (cations) and the rotational degrees of freedom (preferential or random). The cations in the cubic structure have more rotational freedom than in the tetragonal structure. Photoluminescence measurements (bottom left) and lifetimes (bottom right, t, nanoseconds) show the longer lasting the excited charge carriers in the cubic phase correlate well with higher rotational freedom.

Inside a solar cell, sunlight excites electrons. But these electrons often don’t last long enough to go on to power cell phones or warm homes. In a promising new type of solar cell, the solar-excited electrons have better odds going on to work. Why? Scientists revealed the dominant force behind the higher efficiency of these promising hybrid organic-inorganic perovskite solar cells. They found that positively charged molecules rotate in the cell. In moving, the molecules screen the excited charge carriers — electrons and holes (missing electrons) — from annihilation. How far the molecules can rotate determines how long the excited electrons and holes last.

Solar cells could yield more electricity from the sunshine they harvest. Cells made from hybrid organic-inorganic perovskites are promising. They are highly efficient and low cost. The issue was knowing how the perovskites worked in detail. Discovering this new microscopic mechanism offers a rational path to design novel materials for higher solar cell efficiency.

Upon exposure to sunlight, electrons in a semiconducting material are excited from their normal to higher energy states, forming photo-excited electron and hole pairs. (A hole is an empty state left over by the excited electron.) In general, these charge carriers (the excited electrons and holes) will quickly recombine and annihilate each other. However, if they are made to survive long enough to be collected in an external circuit, they can produce electricity. This is the basis for producing electricity from solar energy. Hybrid organic-inorganic perovskites are among the most promising materials for next-generation solar cells because they combine high efficiency and low cost. The lifetime of the charge carriers in hybrid organic-inorganic perovskites is among the highest of all solar cell materials and hence considered to be the major contributor for their higher efficiencies. However, the microscopic mechanism for the high charge carrier lifetimes in these perovskites is under debate.

A team led by researchers at the University of Virginia discovered the dominant mechanism for the higher carrier lifetime that is responsible for the superior hybrid organic-inorganic perovskite solar cell performance. The mechanism involves screening excited charge carriers by the rotating positively charged (cationic) organic molecules in the crystal. The extent of rotational freedom available for the cations determines the magnitude of the lifetime of the photo-excited charge carriers. By combining neutron and x-ray diffraction, high-performance computing, and opto-electronic measurements, the excited carrier lifetimes were found to dramatically increase whenever the system enters from a phase with a lower number of configurations of rotating cations (called rotational entropy) to a phase with a higher value. The lifetime increases upon transition from a tetragonal with constrained orientation for the cation to a cubic phase with random orientation. The enhanced rotational entropy screens the charge carriers, thereby extending their lifetimes. This discovery points out that searching for hybrid organic-inorganic perovskites with high rotational entropy over a wide temperature range may be a key to further improve solar cell performance.