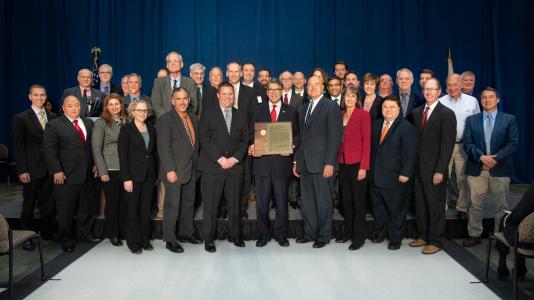 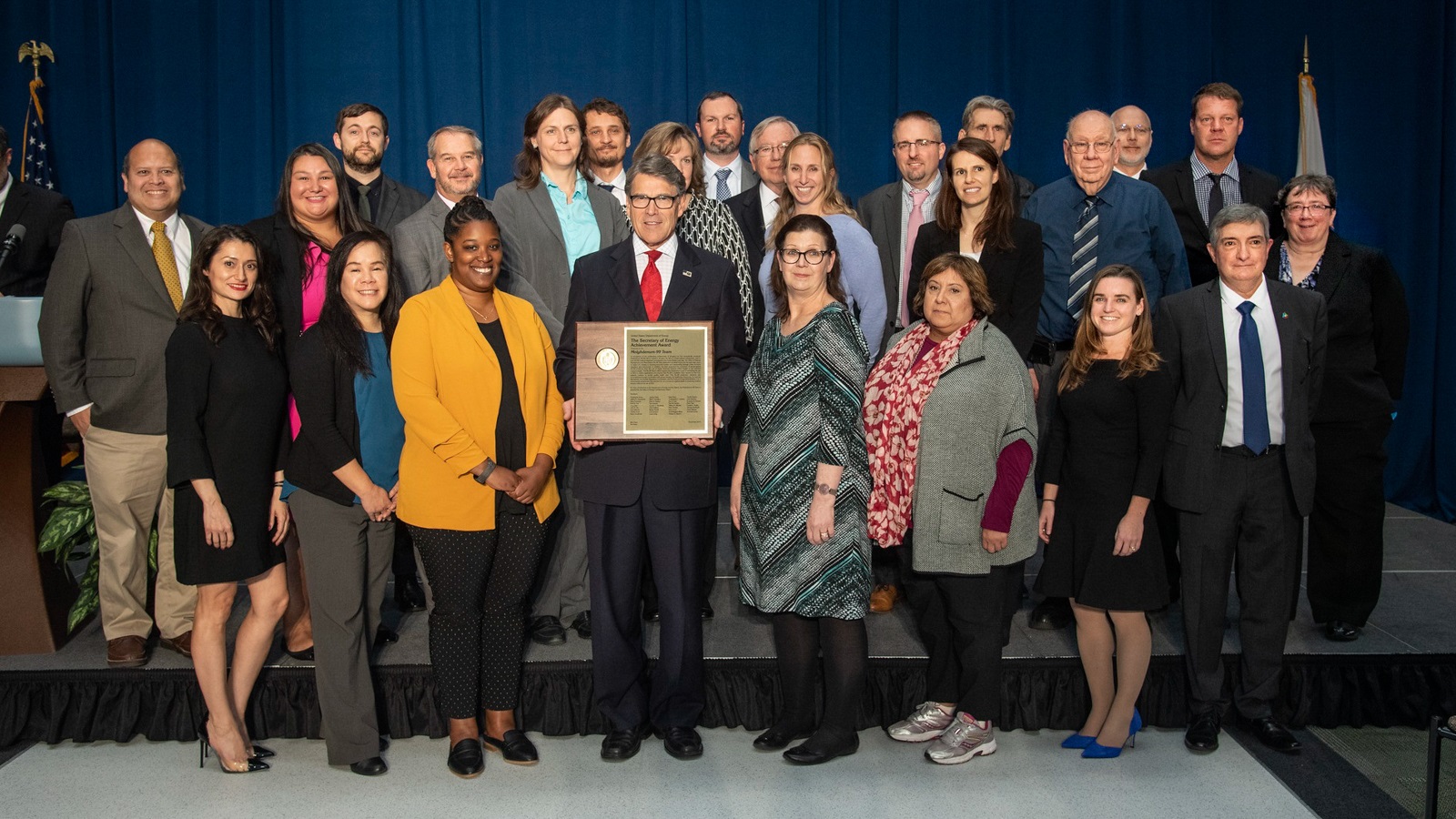 One team of scientists achieved this award for demonstrating that high burnup fuel discharged from commercial reactors can be stored and transported safely. Another group of scientists accepted this award for supporting the first domestic production of the important medical isotope Molybdenum-99 (Mo-99) in nearly 30 years. Other contributors to this second award were DOE’s National Nuclear Security Administration as well as other DOE national laboratories, including Los Alamos, Oak Ridge, Pacific Northwest, Savanah River, and the Y-12 nuclear security complex.

“Argonne is proud that our researchers have earned the highest recognition from the Department of Energy, the Secretary’s Honor Awards,” said Argonne Director Paul Kearns.  ​“These achievements demonstrate the ways Argonne’s discoveries drive U.S. prosperity and security, from safer ways to dispose of spent nuclear fuel to better methods of producing radioisotopes for healthcare.”

The Demonstration Cask, which contains 32 high-burnup spent nuclear fuel (SNF) assemblies, will be opened and inspected after ten years of storage (around 2027). Twenty-five sister rods are being tested by the DOE National Laboratories to establish characteristics and mechanical properties for high-burnup fuel after reactor discharge and simulated drying and transfer. The Nuclear Regulatory Commission has requested data to justify that high-burnup fuel can be safely stored for greater than 20 years and then safely transported. The Demonstration Project will reduce utility cost and increase public safety during storage and transportation of high-burnup SNF.

Michael C. Billone, who is the Irradiation Program Lead for Argonne’s Nuclear Science and Engineering Division, participated in the selection of the stored fuel assemblies and the sister rods taken from the stored assemblies and assemblies with similar irradiation histories. He made major contributions to the sister-rod test plan, which guides the work in progress at Argonne, Oak Ridge National Laboratory and Pacific Northwest National Laboratory.

“This significant achievement would not have been possible without the dedicated efforts of Argonne’s expert lead experimenters and highly skilled hot cell technicians,” said Billone. ​“It has been an honor to manage this program and to work with such a gifted team of scientists/engineers and technicians.”

Billone has represented Argonne in SNF research for about 20 years. He has also made significant contributions in the areas of fast-reactor metallic fuel development and the safety of commercial reactors during postulated loss of coolant accidents.

Argonne’s research efforts surrounding new production methods for Mo-99 began in 1986 with George Vandegrift as the principal investigator, a position he held until he retired in 2017 as an Argonne Distinguished Fellow. This is his second Secretary of Honor Award; Vandegrift was first awarded for developing a cesium extraction process.

Vandegrift’s expertise and dedication to Mo-99 program over several decades was a key to this accomplishment. Argonne’s Mo-99 team irradiated materials as a proof of concept at the Low-Energy Accelerator Facility, processed those materials afterwards, developed processes and tested a prototype molybdenum/technetium generator system as well as designed processes to recycle valuable target materials. The domestic production of Mo-99, without the use of highly enriched uranium (HEU), will enable a more stable supply of Mo-99 for U.S. medical applications while simultaneously reducing the proliferation threats associated with the historic use of HEU.

“I am honored to be included among those receiving this award,” said Peter Tkac, Argonne’s Mo-99 manager. ​“Having a first Mo-99 producer in the U.S. is a great accomplishment, and it is a result of the countless hours worked by this great team of people we have here at Argonne and other national laboratories. This recognition belongs to every one of them.”

Tkac joined Argonne in 2009 as a radiochemist, and currently manages the Radiochemistry group in the Chemical and Fuel Cycle Technologies division. His work develops and demonstrates innovative separation and purification processes from proof of concept to full-scale operations relevant to various Mo-99 production technologies.