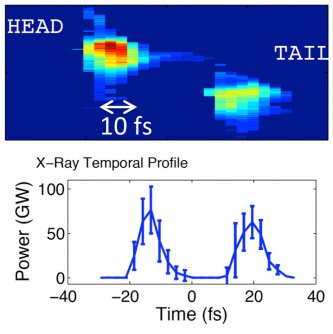 A high-resolution view of a sample or details of the first steps in ultra-fast processes are now available, thanks to researchers at SLAC National Accelerator Laboratory’s Linac Coherent Light Source (LCLS). They incorporated a series of advances to hit samples with a pair of precisely tuned X-ray laser pulses of different colors, or photon energies. The two pulses can arrive at the same time providing a detailed three-dimensional view of the sample’s structure. Delaying the beams by tens of femtoseconds (quadrillionths of a second) allows scientists to study very fast processes, such as the earliest steps of a chemical reaction.

For the first time, X-ray scientists have access and independent control of ultra-short two-color X-ray pulses with nearly the full peak power of the LCLS (above 50 GW). This new capability represents an improvement by an order of magnitude over what was possible before making it easier and faster for scientists to better dissect hard-to-study chemical and material science samples as well as map medically important proteins, such as signaling proteins of interest as pharmaceutical targets.

At the LCLS, researchers have demonstrated the generation of two-color X-ray pulses using twin electron bunches. In this technique, two electron bunches are generated by illuminating the injector photocathode with a train of two laser pulses separated in time by a few picoseconds. After being accelerated and compressed, the two electron bunches are spaced by tens of femtoseconds and have two distinct energies. When the high brightness bunched electron beams are delivered to a sequence of alternating magnets called an undulator, the two bunches emit two independent X-ray pulses of different photon energies. The energy difference and the arrival time delay of the two pulses are controllable independently, which enables the study of dynamical processes excited by X-rays at the femtosecond time scale. The existing hard X-ray self-seeding system can be employed to simultaneously filter the two pulses generated by the twin bunches, allowing the generation of two narrow-bandwidth X-ray laser pulses with a wide energy separation. This enables the 3-D structural determination of previously unmapped proteins using femtosecond serial crystallography at LCLS.

This material is based upon work supported by the U.S. Department of Energy, Office of Science, Office of Basic Energy Sciences, Scientific User Facilities Division.