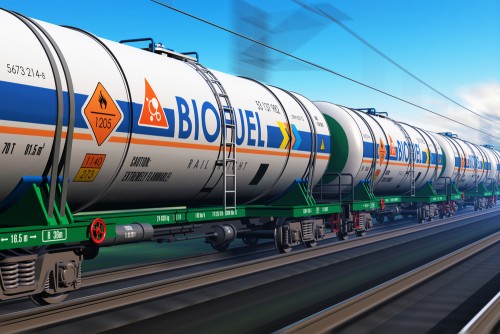 Among the projects that are being supported as part of the first round of funding from the Department of Energy's Technology Commercialization Fund is a collaboration between Argonne and ZeaChem, Inc., aimed at improving the processing of biomass-based feedstocks into biofuels and chemicals. 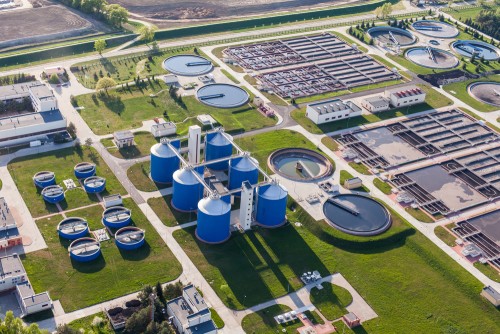 Argonne and the Metropolitan Water Reclamation District of Greater Chicago will be working on a more efficient and cost-effective method for removing trace organic contaminants in our water supply. 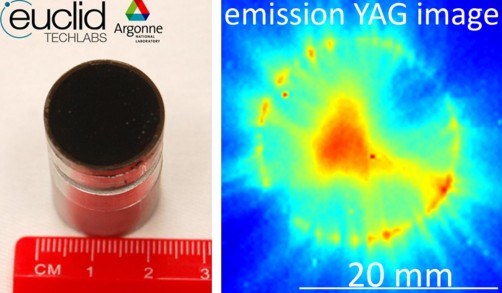 Argonne and Euclid TechLabs will develop an electron source based on field emission from nitrogen-incorporated ultrananocrystalline diamond. Pictured on the left is a stainless steel plug coated with a thin film of nitrogen-incorporated ultrananocrystalline diamond. On the right is an image of the electron beam produced on an yttrium-aluminum-garnet phosphor screen by the cathode plug.

Newswise — The U.S. Department of Energy (DOE) announced Tuesday that it is committing more than $1.7 million in funding to help Argonne National Laboratory and research partners move multiple promising energy technologies to the marketplace.

The awards are part of the first Department-wide round of funding from DOE’s Technology Commercialization Fund (TCF), which is awarding nearly $16 million to support 54 projects at 12 national laboratories involving dozens of research partners.

The Technology Commercialization Fund is administered by DOE’s Office of Technology Transitions, which works to expand the commercial impact of DOE’s portfolio of research, development, demonstration and deployment activities. Projects that will benefit from this round of funding fall in two areas:

All projects selected for the Technology Commercialization Fund will receive an equal amount of non-federal funds from lab partners to match the federal investment.

“Deploying new clean energy technologies is an essential part of our nation’s effort to lead in the 21st century economy and in the fight against climate change,” said Lynn Orr, DOE’s Under Secretary for Science and Energy. “The funds announced today will help to accelerate the commercialization of cutting-edge energy technologies developed in our national labs, making them more widely available to American consumers and businesses.”

The five Argonne-associated projects are:

Argonne and ZeaChem will work to improve the processing of biomass-based feedstocks into biofuels and chemicals. A team led by Argonne chemical engineer YuPo Lin and biochemical engineer Seth Snyder developed the resin wafer electrodeionization (rwedi) technology, a process for producing clean energy that is cost-effective and reduces waste and energy use.

“The implications of rwedi are exciting,” Snyder said. “Commercial production of cellulosic biofuels and renewable chemicals could decrease our carbon emissions while creating U.S. manufacturing jobs.”

The goal of the project is to obtain pilot-scale process performance so that ZeaChem can evaluate whether rwedi helps the company achieve its commercial targets.

“Rwedi could have a significant impact on the efficiency of multiple steps in the biorefining process” said Tim Eggeman, CEO & President of ZeaChem. “We look forward to seeing the scale-up performance.”

A recent report by the U.S. Environmental Protection Agency raises grave concerns over organic contaminants in U.S. coastal waters. In particular, emerging trace organic contaminants (TrOCs) in the water supply present a tremendous challenge for water treatment because the existing technologies to remove them are not cost-effective.

The goal of the collaboration with the Metropolitan Water Reclamation District of Greater Chicago (MWRD) is to create a prototype membrane device with an engineered molecular coating capable of removing TrOCs in an efficient and cost-effective manner.

Argonne, in collaboration with the University of Chicago, has recently developed ultrathin nanoparticle-based membranes with robust mechanical properties. Compared with commercial filters, these new types of filters have the potential to operate at low applied pressure with minimum energy consumption.

“We are excited that the grant will allow us to develop a new type of nanomaterial-based filtration membrane, completely different from the traditional polymer-based systems, to solve a challenging problem in water filtration,” said Xiao-Min Lin, an Argonne nanoscientist and a lead researcher on the project.

Argonne and MWRD will also collaborate with the Illinois Sustainable Technology Center and the Prairie Research Institute – both at the University of Illinois at Urbana-Champaign – to evaluate the performance of the membrane filter.

The collaboration between Argonne and the International Consortium for Advanced Manufacturing Research (ICAMR) will be aimed at improving device connections in systems needed to produce the next generation of sensors.

The work will focus on silicon interposers, a critical component for electrically connecting the multiple integrated circuits needed to make sensors with many functions.

ICAMR will contribute tools and facilities to conduct the research, including work at its state-of-the-art advanced manufacturing facility set to open next spring in Osceola County, Fla.

Argonne and John Crane Inc. will jointly develop an industrial-scale process for forming superlubric coatings based on a graphene-nanodiamond solution.

The technology will be applied to the dry gas seals of gas compressors and similar equipment, thereby reducing friction in the seals and reducing the leakage of toxic and greenhouse gases through worn seals.

“Industries are always interested in path-breaking ideas coming from national labs, but they don’t necessarily have enough funds to invest to take it to the next level,” said Argonne nanoscientist Anirudha Sumant, a lead researcher on the project. “This DOE program is an excellent vehicle to bridge this gap.”

By improving the reliability of sealing systems, there is considerable opportunity to decrease emissions associated with seal failures, reduce maintenance costs and improve productivity.

“This collaboration will propel gas-sealing technology to a new platform,” said Ali Erdemir, an Argonne Distinguished Fellow and a lead researcher on the project.

“This is an important initiative by DOE to raise the Technology Readiness Level of the science that has been developed at the national laboratories,” added Mostafa Beik, a business development executive at Argonne who helps manage the collaboration with John Crane, Inc.

Many of the synchrotron facilities around the world – which operate 24/7 – have very complicated and time-consuming procedures for replacing electron sources when they fail, making a long time between failures highly desirable. It is also highly desirable that these electron sources can consume less power, work for a longer duration and withstand variation in vacuum environment without reducing performance.

In this project, Argonne and Euclid TechLabs will develop an electron source based on field emission from nitrogen-incorporated ultrananocrystalline diamond, or (N)UNCD.

“This will greatly accelerate our efforts in developing robust, energy-efficient and economically viable electron sources for electron accelerators,” Sumant said.

Argonne National Laboratory seeks solutions to pressing national problems in science and technology. The nation’s first national laboratory, Argonne conducts leading-edge basic and applied scientific research in virtually every scientific discipline. Argonne researchers work closely with researchers from hundreds of companies, universities, and federal, state and municipal agencies to help them solve their specific problems, advance America’s scientific leadership, and prepare the nation for a better future. With employees from more than 60 nations, Argonne is managed by UChicago Argonne, LLC for the U.S. Department of Energy’s Office of Science.The U.S. Department of Energy's Office of Science is the single largest supporter of basic research in the physical sciences in the United States and is working to address some of the most pressing challenges of our time. For more information, visit the Office of Science website. 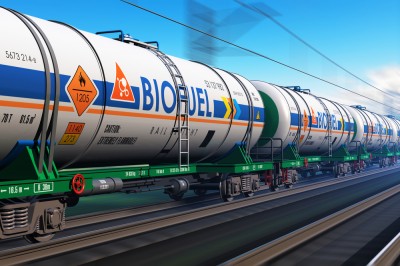 Caption: Among the projects that are being supported as part of the first round of funding from the Department of Energy's Technology Commercialization Fund is a collaboration between Argonne and ZeaChem, Inc., aimed at improving the processing of biomass-based feedstocks into biofuels and chemicals. 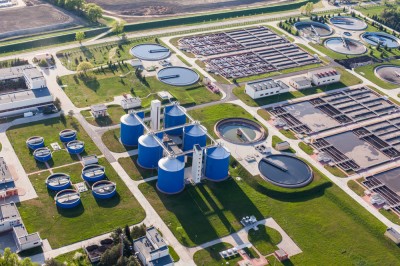 Caption: Argonne and the Metropolitan Water Reclamation District of Greater Chicago will be working on a more efficient and cost-effective method for removing trace organic contaminants in our water supply. 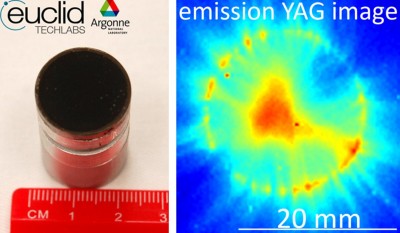 Caption: Argonne and Euclid TechLabs will develop an electron source based on field emission from nitrogen-incorporated ultrananocrystalline diamond. Pictured on the left is a stainless steel plug coated with a thin film of nitrogen-incorporated ultrananocrystalline diamond. On the right is an image of the electron beam produced on an yttrium-aluminum-garnet phosphor screen by the cathode plug.