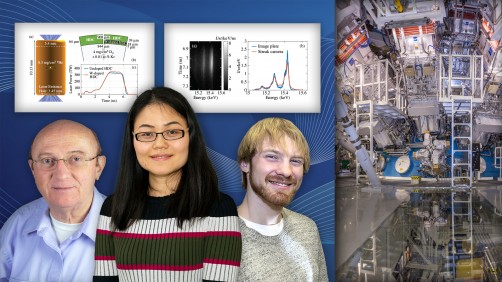 Newswise — Scientists at the U.S. Department of Energy’s (DOE) Princeton Plasma Physics Laboratory (PPPL) have uncovered critical new details about fusion facilities that use lasers to compress the fuel that produces fusion energy. The new data could help lead to the improved design of future laser facilities that harness the fusion process that drives the sun and stars.

Fusion combines light elements in the form of plasma — the hot, charged state of matter composed of free electrons and atomic nuclei — that generates massive amounts of energy. Scientists are seeking to replicate fusion on Earth for a virtually inexhaustible supply of power to generate electricity.

The researchers explored the impact of adding tungsten metal, which is used to make cutting tools and lamp filaments, to the outer layer of plasma fuel pellets in inertial confinement research. They found that tungsten boosts the performance of the implosions that cause fusion reactions in the pellets. The tungsten helps block heat that would prematurely raise the temperature at the center of the pellet.

The research team confirmed the findings by making measurements using krypton gas, sometimes used in fluorescent lamps. Once added to the fuel, the gas emitted high-energy light known as X-rays that was captured by an instrument called a high-resolution X-ray spectrometer. The X-rays conveyed clues about what was happening inside the capsule.

“I was excited to see that we could make these unprecedented measurements using the technique we have been developing these past few years. This information helps us evaluate the pellet’s implosion and helps researchers calibrate their computer simulations,” said PPPL physicist Lan Gao, lead author of the paper reporting the results in Physical Review Letters. “Better simulations and theoretical understanding in general can help researchers design better future experiments.”

The scientists performed the experiments at the National Ignition Facility (NIF), a DOE user facility at Lawrence Livermore National Laboratory. The facility shines 192 lasers onto a gold cylinder, or hohlraum, that is one centimeter tall and encases the fuel. The laser beams heat the hohlraum, which radiates X-rays evenly onto the fuel pellet within.

“It’s like an X-ray bath,” said PPPL physicist Brian Kraus, who contributed to the research. “That’s why it’s good to use a hohlraum. You could shine lasers directly onto the fuel pellet, but it’s difficult to get even coverage.”

Researchers want to understand how the pellet is compressed so they can design future facilities to make the heating more efficient. But getting information about the pellet’s interior is difficult. “Since the material is very dense, almost nothing can get out,” Kraus said. “We want to measure the inside, but it’s hard to find something that can go through the fuel pellet’s shell.”

“The results presented in Lan’s paper are of great importance to inertial fusion and provided a new method of characterizing burning plasmas,” said Phil Efthimion, head of the Plasma Science & Technology Department at PPPL and leader of the collaboration with NIF.

The researchers used a PPPL-designed high-resolution X-ray spectrometer to collect and measure the radiated X-rays with more detail than had been measured before. By analyzing how the X-rays changed every 25 trillionth of a second, the team was able to track how the plasma changed over time.

“Based on that information, we could estimate the size and density of the pellet core more precisely than before, helping us determine the efficiency of the fusion process,” Gao said. “We provided direct evidence that adding tungsten increases both density and temperature and therefore pressure in the compressed pellet. As a result, fusion yield increases.”

“We are looking forward to collaborating with theoretical, computational, and experimental teams to take this research further,” she said.

The research team included collaborators from Lawrence Livermore National Laboratory, the Laboratory for Laser Energetics at the University of Rochester, the Massachusetts Institute of Technology (MIT), and Israel’s Weizmann Institute of Science. This research was supported by the DOE’s Office of Science (Fusion Energy Sciences).