Glaciers in cold, dry ecosystems respond differently to changes in climate than glaciers in warmer climates. 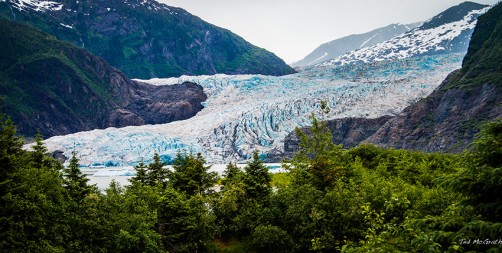 Bubbly white ice makes up the bulk of the glacier surfaces, suggesting internal melting may lead to substantial mass loss.

Newswise — How do ice sheets melt in places where surface conditions are too cold for melting? Glaciers in the McMurdo Dry Valley rarely are observed to be actively melting, yet runoff from these glaciers feeds streams, lakes, and associated ecosystems in the valleys, which are among the coldest and driest ecosystems on Earth. The processes generating melt under these marginal conditions are not well understood, and traditional melt modeling techniques are inadequate to explain the observed runoff. Using ice models, scientists found that melt on the glacier surface is rare, but internal melting is extensive and its drainage accounts for about half of all summer ice loss.

Internal melting applies to glaciers at very high latitudes and elevations and to many extraterrestrial glaciers, such as those on Mars. Thus, for accurate measurements in these environments, the processes of solar radiation penetration into the ice and subsurface ice drainage and runoff should be incorporated into modeling glacier behavior at very high latitudes and elevations.

A team of scientists, including a U.S. Department of Energy (DOE)−supported researcher at Los Alamos National Laboratory, has studied the melting and runoff puzzle using ice models. The temperature at the field location of the McMurdo Dry Valley glaciers of Antarctica never rises far above the threshold of melting throughout summer. The team investigated two processes: (1) penetration of solar radiation into the ice and (2) drainage of subsurface melt from the ice, as well as their roles in generating runoff from Dry Valley glaciers. The scientists successively added these processes to an energy balance model and applied the model to three glacier sites using 13 years of hourly meteorological data. Model results show that inclusion of both processes is necessary to accurately model the loss, density, and temperature of ice on these glaciers. Although melt on the glacier surface is rare, internal melting 5 to 15 centimeters below the ice surface is extensive and its drainage accounts for ~50% of all summer ice loss. This is consistent with field observations of subsurface streams and formation of a weathering crust. The team identified an annual cycle of weathering crust formation in summer and its removal during the 10 months of winter sublimation. Ice melt complexities at air temperatures close to the melting temperature result in these glaciers responding differently to changes in climate than glaciers in warmer climates.

This work was funded by the National Science Foundation’s (NSF) Office of Polar Programs (Grants ANT-0423595 and ANT-0233823), the Earth System Modeling program of the Office of Biological and Environmental Research within the U.S. Department of Energy’s Office of Science, and by an NSF grant to the Center for Remote Sensing of Ice Sheets (CReSIS; Grant ANT-0424589).