Researchers discover key details of how to drive photosynthesis in the shade by studying far-red light acclimation in cyanobacteria. 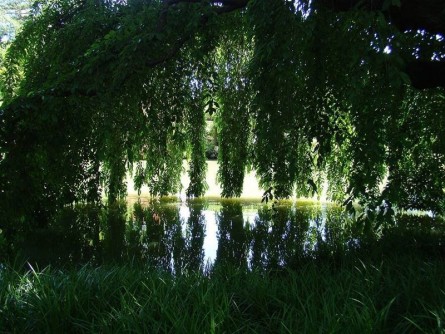 Plants and algae that grow in deep shade—such as under this tree—must fight for every bit of light. To do so, some can equip themselves to use low-energy red and infra-red light by changing their chlorophyll.

Plants and algae use green-tinted chlorophyll to convert high-energy sunlight into food via photosynthesis. But what happens in deep shade? Cyanobacteria are small, photosynthetic microorganisms found in a wide range of habitats. Some can survive in deep shade by using infra-red and other low-energy light to photosynthesize. They accomplish this by re-equipping their photosynthetic protein complexes with different kinds of chlorophyll that absorb lower-energy light. This allows the cells to acclimate to environments without standard white light. Researchers have determined molecular structures of the photosynthetic systems under this acclimated state. This allows the researchers to provide a detailed map of how some cyanobacteria can use low-energy light to grow.

Researchers used new methods to determine the protein structures of the photosynthetic systems in cyanobacteria that are acclimated to far-red light. Previous methods could not capture this temporary change. The new method allowed scientists to determine, for the first time, how the cyanobacteria change pigments to accommodate the low-energy light. These findings have enabled further research into how this process occurs. The resulting knowledge could allow scientists to improve shade tolerance in crops by boosting the plant’s ability to use low-energy light. This could allow more efficient production of plant biomass for food and renewable chemicals, including renewable liquid biofuels.

The research team looked at the protein complexes of the two main photosystems when acclimated to far-red light. The team included scientists from Yale University, Pennsylvania State University, and other universities. By using the cryo-electron microscopy user facility at Brookhaven National Laboratory, they were able to image the photosystems in their acclimated state. Usually, these photosystems (PSI and PSII) use only chlorophyll a, but the new, far-red acclimated photosystems add in type f—and PSII added in type d as well. The structures were even able to show exactly where these new chlorophyll types were added, giving researchers an idea of how the photosystems control which types of chlorophyll bind and where they bind and exactly how these new protein complexes can use lower-energy light. The Photosynthetic Antenna Research Center (PARC), an Energy Frontier Research Center funded by the Department of Energy (DOE) Office of Science, Office of Basic Energy Sciences, supported further research in this area in a study that analyzed how far-red light acclimation changed the cellular structure. This study identified specific changes in the proteins produced by the cyanobacteria as well as differences in how the far-red light acclimated photosystems (with chlorophyll d and f) came together in higher-order structures. Taken together, these studies show the many changes needed to allow these cyanobacteria to improve their shade tolerance.

This research was funded by the DOE Office of Science, Basic Energy Sciences Program, including the Energy Frontier Research Center and the Chemical Sciences, Geosciences and Biosciences Division, Photosynthetic Systems program. This research was also supported by the National Science Foundation, the National Institute of General Medical Sciences of the National Institutes of Health, the Deutsche Forschungsgemeinschaft Emmy Noether project, the Royal Society University Research Fellowship award, the Leverhulme Trust Grant, and the European Research Council Synergy Award.