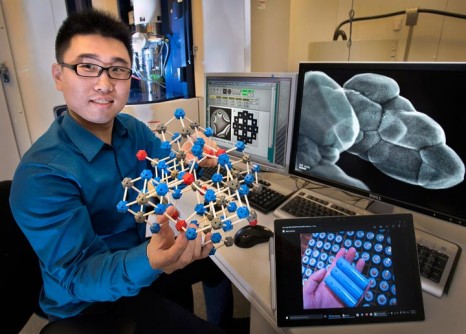 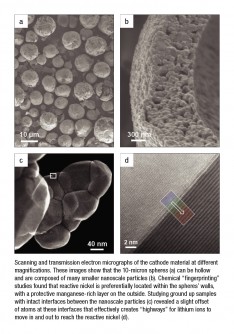 Scanning and transmission electron micrographs of the cathode material at different magnifications. These images show that the 10-micron spheres (a) can be hollow and are composed of many smaller nanoscale particles (b). Chemical "fingerprinting" studies found that reactive nickel is preferentially located within the spheres' walls, with a protective manganese-rich layer on the outside. Studying ground up samples with intact interfaces between the nanoscale particles (c) revealed a slight offset of atoms at these interfaces that effectively creates "highways" for lithium ions to move in and out to reach the reactive nickel (d).

Newswise — UPTON, NY -- Building a better battery is a delicate balancing act. Increasing the amounts of chemicals whose reactions power the battery can lead to instability. Similarly, smaller particles can improve reactivity but expose more material to degradation. Now a team of scientists from the U.S. Department of Energy's (DOE) Brookhaven National Laboratory, Lawrence Berkeley National Laboratory, and SLAC National Accelerator Laboratory say they've found a way to strike a balance--by making a battery cathode with a hierarchical structure where the reactive material is abundant yet protected.

"Our colleagues at Berkeley Lab were able to make a particle structure that has two levels of complexity where the material is assembled in a way that it protects itself from degradation," explained Brookhaven Lab physicist and Stony Brook University adjunct assistant professor Huolin Xin, who helped characterize the nanoscale details of the cathode material at Brookhaven Lab's Center for Functional Nanomaterials (CFN, https://www.bnl.gov/cfn/).

X-ray imaging performed by scientists at the Stanford Synchrotron Radiation Lightsource (SSRL) at SLAC along with Xin's electron microscopy at CFN revealed spherical particles of the cathode material measuring millionths of meter, or microns, in diameter made up of lots of smaller, faceted nanoscale particles stacked together like bricks in a wall. The characterization techniques revealed important structural and chemical details that explain why these particles perform so well.

Chemistry is at the heart of all lithium-ion rechargeable batteries, which power portable electronics and electric cars by shuttling lithium ions between positive and negative electrodes bathed in an electrolyte solution. As lithium moves into the cathode, chemical reactions generate electrons that can be routed to an external circuit for use. Recharging requires an external current to run the reactions in reverse, pulling the lithium ions out of the cathode and sending them to the anode.

They sprayed a solution of lithium, nickel, manganese, and cobalt mixed at a certain ratio through an atomizer nozzle to form tiny droplets, which then decomposed to form a powder. Repeatedly heating and cooling the powder triggered the formation of tiny nanosized particles and the self-assembly of these particles into the larger spherical, sometimes hollow, structures.

Using x-rays at SLAC's SSRL, the scientists made chemical "fingerprints" of the micron-scale structures. The synchrotron technique, called x-ray spectroscopy, revealed that the outer surface of the spheres was relatively low in nickel and high in unreactive manganese, while the interior was rich in nickel.

"The manganese layer forms an effective barrier, like paint on a wall, protecting the inner structure of the nickel-rich 'bricks' from the electrolyte," Xin said.

But how were the lithium ions still able to enter the material to react with the nickel? To find out, Xin's group at the CFN ground up the larger particles to form a powder composed of much smaller clumps of the nanoscale primary particles with some of the interfaces between them still intact.

"These samples show a small subset of the bricks that form the wall. We wanted to see how the bricks are put together. What kind of cement or mortar binds them? Are they layered together regularly or are they randomly oriented with spaces in between?" Xin said.

Using an aberration-corrected scanning transmission electron microscope--a scanning transmission electron microscope outfitted with a pair of "glasses" to improve its vision--the scientists saw that the particles had facets, flat faces or sides like the cut edges of a crystal, which allowed them to pack tightly together to form coherent interfaces with no mortar or cement between the bricks. But there was a slight misfit between the two surfaces, with the atoms on one side of the interface being ever so slightly offset relative to the atoms on the adjoining particle.

"The packing of atoms at the interfaces between the tiny particles is slightly less dense than the perfect lattice within each individual particle, so these interfaces basically make a highway for lithium ions to go in and out," Xin said.

Like tiny smart cars, the lithium ions can move along these highways to reach the interior structure of the wall and react with the nickel, but much larger semi-truck-size electrolyte molecules can't get in to degrade the reactive material.

Using a spectroscopy tool within their microscope, the CFN scientists produced nanoscale chemical fingerprints that revealed there was some segregation of nickel and manganese even at the nanoscale, just as there was in the micron-scale structures.

"We don't know yet if this is functionally significant, but we think it could be beneficial and we want to study this further," Xin said. For example, he said, perhaps the material could be made at the nanoscale to have a manganese skeleton to stabilize the more reactive, less-stable nickel-rich pockets.

"That combination might give you a longer lifetime for the battery along with the higher charging capacity of the nickel," he said.

***Brookhaven National Laboratory is supported by the Office of Science of the U.S. Department of Energy. The Office of Science is the single largest supporter of basic research in the physical sciences in the United States, and is working to address some of the most pressing challenges of our time. For more information, please visit science.energy.gov.One of ten national laboratories overseen and primarily funded by the Office of Science of the U.S. Department of Energy (DOE), Brookhaven National Laboratory conducts research in the physical, biomedical, and environmental sciences, as well as in energy technologies and national security. Brookhaven Lab also builds and operates major scientific facilities available to university, industry and government researchers. Brookhaven is operated and managed for DOE's Office of Science by Brookhaven Science Associates, a limited-liability company founded by the Research Foundation for the State University of New York on behalf of Stony Brook University, the largest academic user of Laboratory facilities, and Battelle, a nonprofit applied science and technology organization.

* Scientific paper: "Metal segregation in hierarchically structured cathode materials for high-energy lithium batteries" [http://dx.doi.org/10.1038/nenergy.2015.4] NOTE: Link will not be active until after the embargo lifts

* Berkeley Lab and SLAC will also be issuing news releases on this work. Links to those stories will appear on the BNL website when they become available. 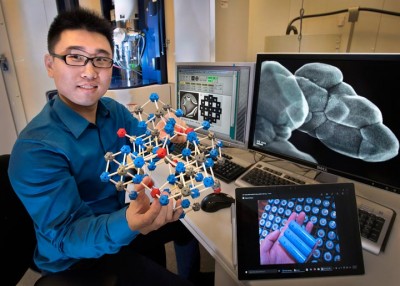 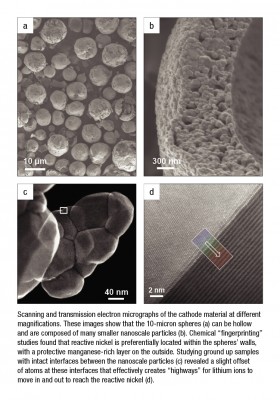 Caption: Scanning and transmission electron micrographs of the cathode material at different magnifications. These images show that the 10-micron spheres (a) can be hollow and are composed of many smaller nanoscale particles (b). Chemical "fingerprinting" studies found that reactive nickel is preferentially located within the spheres' walls, with a protective manganese-rich layer on the outside. Studying ground up samples with intact interfaces between the nanoscale particles (c) revealed a slight offset of atoms at these interfaces that effectively creates "highways" for lithium ions to move in and out to reach the reactive nickel (d).