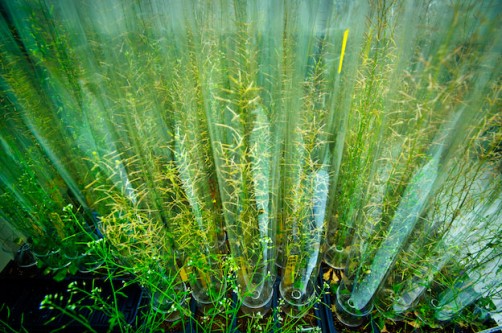 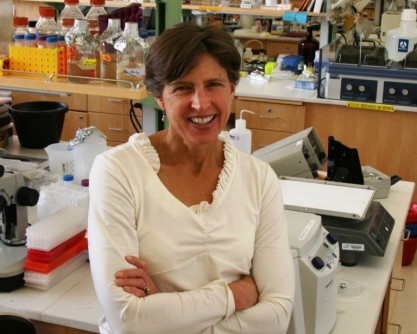 Pamela Ronald is a leading authority on plant genetics who holds joint appointments with the Joint BioEnergy Institute and the University of California at Davis.

Newswise — A bacterial signal that when recognized by rice plants enables the plants to resist a devastating blight disease has been identified by a multi-national team of researchers led by scientists with the U.S. Department of Energy (DOE)’s Joint BioEnergy Institute (JBEI) and the University of California (UC) Davis.

“Our results show that RaxX, a small, previously undescribed bacterial protein, is required for activation of XA21-mediated immunity to Xoo,” says Pamela Ronald, a plant geneticist for both JBEI and UC Davis who led this study. “XA21 can detect RaxX and quickly mobilize its defenses to mount a potent immune response against Xoo. Rice plants that do not carry the XA21 immune receptor or other related immune receptors are virtually defenseless against bacterial blight.”

Ronald, who directs JBEI’s grass genetics program and is a professor in the UC Davis Department of Plant Pathology, is one of two corresponding authors of a paper describing this research in Science Advances, along with Benjamin Schwessinger, a grass geneticist with JBEI’s Feedstocks Division at the time of this study and now with the Australian National University. The paper is titled “The rice immune receptor XA21 recognizes a tyrosine-sulfated protein from a Gram-negative bacterium.” (See end of story for a complete list of authors.)

Rice is a staple food for half the world’s population and a model plant for perennial grasses, such as Miscanthus and switchgrass, which are prime feedstock candidates for the production of clean, green and renewable cellulosic biofuels. Just as bacterial blight poses a major threat to rice crops, bacterial infections of grass-type fuel plants could present major problems for the future production of advanced biofuels. However, the mechanisms by which bacteria infect such grasses is poorly understood.

“Pathogens of grass-type biofuel crops that would reduce the yield of fuel-producing biomass likely use similar infection mechanisms to Xoo,” says Schwessinger. “Having identified the activator of XA21, we will be able to study the rice immune system in far greater detail than ever before. As rice is the model for grass-type biofuel feedstocks, this might help in the future engineering of more disease-resistant grass-type biofuel crops.”

Most plants and many animals can only defend themselves against a given disease if they carry specialized immune receptors that sense the invading pathogen behind the disease. In 2009, Ronald and her group identified a small bacterial protein they named “Ax21” as the molecular key that binds to the XA21 receptor to activate a rice plant’s immune response. Diligent follow-up research by her group led to Ronald retracting these results and continuing the search for the true key.

“We were ecstatic with our results in 2009 because identifying the molecule that XA21 recognizes provides an important piece to the puzzle of how the rice plant is able to respond to infection,” Ronald says, “but then it was back to the drawing board. Now we have the real XA21 activator.”

To uncover the true XA21 activator, Ronald and her collaborators studied mutations around an operon known as “RaxSTAB.” Operons are small groups of genes with related functions that are co-transcribed in a single strand of messenger RNA.

“We hypothesized that the activator of XA21 might be encoded in the proximity of the molecular machinery that we already knew was involved in production of the activator,” says Rory Pruitt, a member of Ronald’s research group and a co-lead author with Schwessinger of the Science Advances paper. “One of these bacterial mutants had a deletion of a then unknown gene, now called raxX.”

Adds Schwessinger, “When we looked more closely in this operon region we identified raxX as a potentially expressed gene. This small gene stuck out as it was very well conserved in other Xanthomonas that encode RaxSTAB but not conserved in any other bacteria that miss this operon.”

In addition to its implications for future grass-type biofuel feedstocks, the revelation of RaxX as the bacterial molecule that triggers the XA21-mediated immune response also holds important implications for the worldwide supply of rice. The research team has shown that a number of strains of the blight bacteria can evade XA21-mediated immunity because they encode a variant of raxX alleles.

“Like prescribing the best vaccination for the flu each season by monitoring which flu strains are going to be the most prevalent, it should be possible to screen wild Xoo populations in the rice-growing regions of Asia and Africa for whether they encode RaxX alleles that are recognized by XA21,” says Schwessinger. “We can then inform farmers which rice varieties will be resistant to those bacterial populations.”

Schwessinger also notes that several major human diseases involve tyrosine-sulfated proteins, including HIV. However the precise role of tyrosine sulfation in receptor binding and cell invasion is not understood.

“Understanding the RaxX/XA21 ligand-receptor pair might help medical researchers better understand the role of tyrosine sulfation for receptor binding in human disease,” Schwessinger says. “This could lead to the development of novel components that block the binding of specific tyrosine-sulfated proteins.”

This research was supported by both the DOE Office of Science, the National Institutes of Health, and the Human Frontier Science Program. 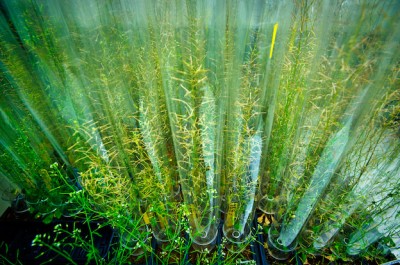 Caption: Rice is a staple for half the world’s population and the model plant for grass-type biofuel feedstocks 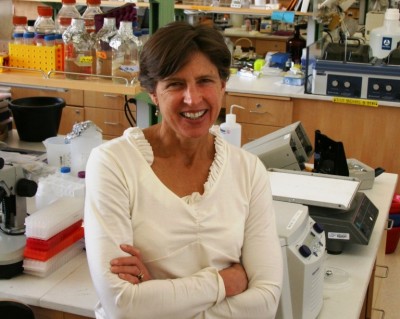 Caption: Pamela Ronald is a leading authority on plant genetics who holds joint appointments with the Joint BioEnergy Institute and the University of California at Davis.