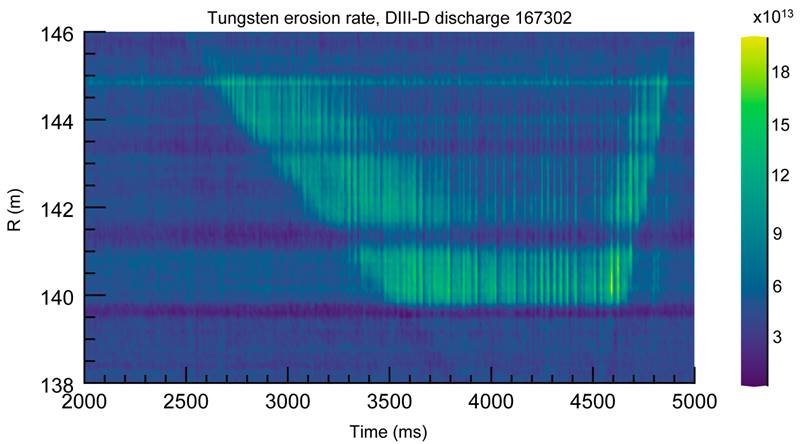 Image of measurements of the intensity of the line radiation emitted by tungsten atoms eroding from the region of highest heat and plasma flux on the tokamak wall, known as the divertor.

Newswise — Scientists developed a new model to describe how large, periodic bursts of plasma known as edge localized modes (ELMs) erode parts of tokamak walls. Tokamaks are devices used to study the process of fusion. The ELMs erode a part of the wall armored with tungsten known as the divertor. This model predicted that most of the plasma hitting the wall during ELMs will be low-energy particles that re-circulate. These particles "recycle" many times in the divertor region and erode the tungsten armor very little. New measurements conducted on the DIII-D experimental fusion device agree well with these predictions. This data also indicates that if small amounts of carbon impurities are present in the plasma, they can erode the tungsten just as much as the main deuterium fuel.

This new model provides insight into how much the fusion reactor wall will erode during the periodic bursts of plasma known as ELMs. Researchers also collected experimental data that confirmed these conclusions. Scientists already knew that they needed to direct the plasma to a state where the ELM bursts are relatively small. This research provides new information on how small these plasma bursts must be for scientists to bring the tungsten wall armor’s erosion rate to an acceptable level.

Large, periodic bursts of plasma known as edge localized modes (ELMs) tend to occur near the edge region of high confinement plasma in fusion devices. This causes large amounts of tungsten to erode from the armor region of the tokamak wall known as the divertor. Researchers developed a refined model for how energetic ions stream out from the confined plasma and strike the divertor surface during ELMs. This model predicts that most of the plasma density near the tokamak wall should actually be comprised of relatively low-energy particles that re-circulate, or "recycle" in the divertor region and do not cause much erosion of the tungsten armor. New experiments were conducted on the DIII-D experimental fusion device to test these predictions. Measurements from these experiments were consistent with the conclusion that only the energetic particles originating from the confined plasma region erode the tungsten armor, and the "recycling" particles do not damage the tungsten material. Both the hydrogen fuel and carbon impurities expelled from the plasma were observed to cause roughly equal amounts of tungsten erosion. New simulations were also performed to extrapolate how fast the tungsten armor will erode in ITER, and it was found that nearly all the damage to the armor will be done by the deuterium and tritium fuel ions because they will be very energetic in ITER, while the expected levels of beryllium impurity will not cause much erosion of the tungsten divertor. These results suggest that erosion of the tungsten armor may be reduced during ELMs in future fusion devices by maximizing the concentration of recycling particles near the wall while simultaneously minimizing the intensity of the ELM burst from the confined plasma.