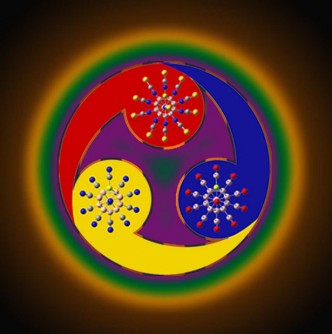 Welcome trianions. Normally, multiply negatively charged species are not predicted to be stable in the gas phase because of strong electrostatic repulsion between the extra electrons. However, new design rules have identified trianions, molecules with stable ground state structures. The artist’s rendering shows three recently discovered gas-phase molecules that exhibit this unusual structural stability. The molecules contain one beryllium (lime green) and 11 boron atoms forming an icosahedral cage. These molecules are bound to twelve other molecules to displace the negative charge, further stabilizing these unusual molecules.

Trianions are likely to have unusual reactive properties. Also, they could benefit energy-relevant applications. For example, a trianion could shuttle aluminum back and forth in a new type of battery. Such a device offers an attractive alternative to lithium-ion batteries. The stability of trianion species may also have a big impact elsewhere, such as fuel cells and purifiers.

Researchers have found a new way to predict the stability of multiply charged molecules using high-throughput simulations, which are becoming an important materials discovery tool. These tools can be used to study the properties of large ionic molecules with multiple charges. Previously, the stability of a multiply negatively charged ion was often interpreted within the context of single electron (octet) counting rule. However, new results have shown that stable molecules are predicted in computer simulations based on a technique that uses multiple electron counting rules simultaneously (octet and Wade–Mingos rules). Once a stable, multiply charged structure has been identified, the energy needed to sequentially detach the added electrons is calculated. The simulations revealed extreme stability for three different molecules that have a net negative 3 charge (called a trianion). The trianions contain beryllium (Be) and boron (B) atoms. Also, the trianions have another type of molecule that pulls the negative charge towards it, further stabilizing the structure. The team predicted that the most stable trianions were BeB11(CN)123-, BeB11(BO)123-, and BeB11(SCN)123-. These trianions were all predicted to be stable against spontaneous electron emission in the gas phase. Presently, there are no known trianions that exhibit this kind of stability in the gas phase. Furthermore, molecular dynamics simulations carried out for temperatures over 900 degrees Fahrenheit showed no change in shape of the molecule or its stability. This further demonstrated that the trianions are dynamically stable. These unusually stable trianions are likely to be important reactive species for the discovery of new molecules in addition to being important for technological applications. As an example, trianions could be used to discover novel chemistry involving noble gas atoms, such as xenon, which are generally considered to be unreactive. Stable trianions could also act as superatoms that mimic the chemistry of Group 15 elements of the periodic table (called pnictogens). Also, trianions could be used for the design of halogen-free electrolytes in aluminum-ion batteries, offering an alternative to lithium-ion batteries.