Waste Stream to Energy Source: What if America’s Next Big Fuel Source Is Its Trash? 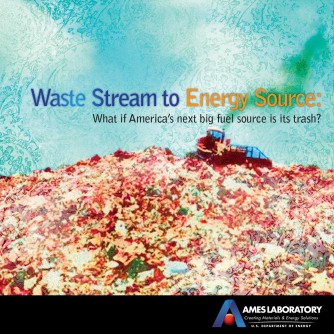 Newswise — According to the U.S. Environmental Protection Agency, the United States produced 254 million tons of municipal solid waste in 2013. And though 87 million tons of that material from the landfill was diverted through recycling and composting, what if the nation could do better? What if landfills could become local sources of clean energy production? Better yet, what if all waste streams, like those from agricultural, livestock, and food production, could essentially become fuel refineries at a local level?

It’s a question being asked by a collaboration of National Laboratory researchers who want to create energy conversion technologies designed to mine the carbon out of waste processes that traditionally have been an environmental burden to the planet and a disposal headache for humans.

“The idea of using waste as energy source really isn’t new,” said Cynthia Jenks, Assistant Director of Scientific Planning and Division Director for Chemical and Biological Sciences for the Ames Laboratory. “For example, some municipal and regional utilities already burn landfill waste as a source for electrical power. But we think there are better, cleaner, and more efficient ways to get at that carbon and use the potential energy from it.”

A new concept was born of the Big Ideas Summit, held by the Department of Energy and its National Laboratories in 2015. The effort, being co-led by Ames Laboratory and Pacific Northwest National Laboratory, is a collaboration of 12 national laboratories to find new catalytic technologies that can efficiently produce biofuel from waste streams.

The goals are specific. Make the technology as simple as possible, yet adaptable to diverse waste streams. Locate it right at the waste stream source, whether it’s a landfill, livestock farm, or commercial facility. Make it easy and economical to produce and deliver through the use of modular manufacturing.

“The idea brings together a lot of overlapping interests: chemical research, applied engineering, modular manufacturing, waste management, agriculture, industry, and energy sector investors. It’s a complex idea with a lot of moving parts, but one that we think will get us a lot closer to accessing the potential energy in these underused resources, and a lot closer to the nation’s sustainable energy production goals,” said Jenks.

To meet the goal, the participating National Laboratories will pool their skills in materials and chemical sciences, high performance computing, engineering, and applied technology. Ames Laboratory will lend the project its expertise in catalysis through its Chemical and Biological Sciences Division. Scientists Igor Slowing and Aaron Sadow have already done extensive work in creating catalysts that are able to convert carbons, by placing catalytic agents on high surface area nanomaterials. They want to develop processes that make possible the controlled decomposition of waste polymers into useful hydrocarbons.

“A large amount of the waste that goes into landfills is polymers…plastics. These are very carbon rich, very processed materials, and if we were to be able to convert that waste into new, useful compounds or energy, that would make much better use of them. Right now, we’re wasting all that carbon. It’s just sitting there in the trash.” Aaron Sadow.

Sadow and Slowing will also be applying similar techniques to the conversion of wet sludge and agricultural wastes.

Sadow said the scientific challenges are complex, with a need for chemical reactions that can be highly efficient, operating at low temperature and low pressure. They will also need to be capable of adapting to changes in the raw material feeding them.

“Any waste stream is very mixed, and its composition varies over time,” said Sadow. “We can physically sort and then convert, but then there’s that separation step. We don’t really know how to chemically convert mixtures in general. That is a really big, interesting, fundamental challenge that research hasn’t yet tackled, and that’s exciting to contemplate.”

While the group estimates that these localized biofuel refineries would produce small quantities of biofuel, an average of the equivalent of 125 barrels of oil per day, the collective impact could be staggering. Transforming the available national waste streams into fuels and other useful chemical products could translate to the equivalent of 2.7 billion barrels of oil per year, or 40 percent of the nation’s annual crude oil use.

“That’s really the ‘big idea,’” said Jenks. “Where there is waste, there is energy. We believe that the collective expertise of the national labs, including the chemical research strengths of Ames Laboratory, puts that big idea within reach.”