Water Leads to Chemical That Gunks Up Biofuels Production 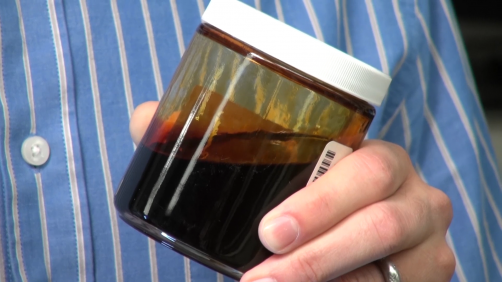 Green gold: Derived from plants, bio-oil can be processed into gasoline, diesel or other typical petroleum products such as plastics.

Newswise — RICHLAND, Wash. -- Trying to understand the chemistry that turns plant material into the same energy-rich gasoline and diesel we put in our vehicles, researchers have discovered that water in the conversion process helps form an impurity which, in turn, slows down key chemical reactions. The study, which was reported online at the Journal of the American Chemical Society, can help improve processes that produce biofuels from plants.

The study examines the conversion of bio-oil, produced from biomass such as wood chips or grasses, into transportation fuels. Researchers used computer simulations to explore what happens to a common bio-oil byproduct. Water, everywhere during biofuels production, turns the byproduct into an impurity that disrupts and blocks the reactions that lead to biofuels. The results apply not only to water but to related liquids in bio-oil such as alcohols and certain acids.

The study provides a thorough view of the byproduct phenol reacting with catalysts. Catalysts are what chemists use to speed up the reactions that convert plants into fuels, reactions that occurred deep in the Earth over millions of years and gave us the fossil fuels we use today.

"We are getting to the heart of the fundamentals of biofuels catalysis," said co-author Roger Rousseau, a scientist at the Department of Energy's Pacific Northwest National Laboratory. "The work tells us that the impurity is unavoidable and we need to make sure it does not build up enough to interfere. Although this is a very fundamental issue, it points out for us what types of things we can do to help extend the lifetime of the catalysts we are using to make bio-oil."

To make plant matter into products that come from petroleum -- gasoline and plastics -- biofuels chemists need to understand every step of the process. To make biofuels, researchers rapidly heat up plant matter in a process called pyrolysis. They then use catalysts to convert the pyrolysis oil into transportation fuels.

The chemistry that occurs leads to the production of precursors to fuels and a byproduct called phenol. Phenol itself isn't too much of a problem in fuels, but it sits in the vat of chemicals and water that are undergoing a variety of reactions and gets converted into molecules called ketones.

Troublesome ketones will link up with others like them and form long chains that gunk up the catalysts and interfere with important reactions. Researchers at PNNL wanted to know the molecular details on how phenol converts to ketone. Ultimately, they discovered, it's not the catalyst's fault.

Catalyst in the Computer

While some ideas existed for how this happens, the team used computers to simulate phenol interacting with catalysts and water to see step-by-step what is going on. To explore water's role in the reaction, they also simulated the same reactions in a vacuum, which puts everything but the solid catalyst in vapor form. They performed these simulations using resources in EMSL, DOE's Environmental Molecular Sciences Laboratory at PNNL.

In the simulations, the catalyst is essentially a piece of metal, either nickel or platinum. The phenol molecules and water molecules randomly bounce or land on the metal surface where bonds break and reform between atoms within molecules by shifting electrons around. In this way, a phenol might transform into a ketone.

The team found that the presence of water dramatically upped the speed with which the final conversion to a ketone happened. In addition, water also affected how the metal catalyst carried its electrons, which in turn affected how well it catalyzed the reaction between phenol and hydrogen atoms that settle on the catalyst's surface.

"I was surprised at the role liquid plays in the reactivity of the metal catalyst," said PNNL's Yeohoon Yoon, a co-author on the study. "We know a lot about these reactions in the gas phase, but almost nothing in the liquid. The principles we've learned can be applied to other catalyst-driven reactions. They will make working in the complex system of real catalysts making real biofuels easier."

And that's the next step. PNNL colleagues at the Bioproducts, Sciences & Engineering Laboratory, a facility located on the Washington State University Tri-Cities campus where PNNL and WSU researchers collaborate, will use this work to guide development of pyrolysis oil transformation into biofuels. (http://www.tricity.wsu.edu/bsel/)

See how catalysts get gunked up when bio-oil is converted into a hydrocarbon mix that can be further refined into useable fuel. https://www.youtube.com/watch?v=qOMXJsl7SA0

The researchers also presented this work at the American Chemical Society's Annual Meeting in San Francisco on Aug. 12.

This work was supported by the Department of Energy Offices of Science and Energy Efficiency and Renewable Energy.

Interdisciplinary teams at Pacific Northwest National Laboratory address many of America's most pressing issues in energy, the environment and national security through advances in basic and applied science. Founded in 1965, PNNL employs 4,300 staff and has an annual budget of about $950 million. It is managed by Battelle for the U.S. Department of Energy’s Office of Science. As the single largest supporter of basic research in the physical sciences in the United States, the Office of Science is working to address some of the most pressing challenges of our time. For more information on PNNL, visit the PNNL News Center, or follow PNNL on Facebook, Google+, LinkedIn and Twitter.