Why Are These Extremely Light Calcium Isotopes So Small?

The radii of three proton-rich calcium isotopes are smaller than previously predicted because models didn’t account for two nuclear interactions. 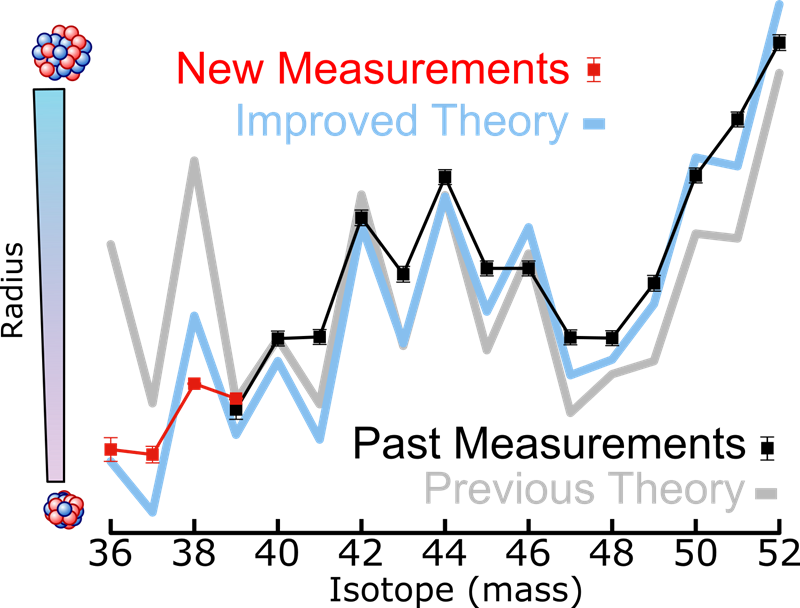 Nuclear physicists measured the radii of three calcium isotopes, rich in proton content, for the first time. They obtained the measurements using a laser spectroscopy technique at the National Superconducting Cyclotron Laboratory (NSCL) at Michigan State University (MSU). The team’s research showed the radii were much smaller than earlier predictions. They developed an improved theory. It shows that two factors, nucleonic superfluidity and weak binding effects, mean the nuclei are smaller than predicted. The theory gives a better understanding of the ways in which protons interact with each other at large distances outside the nuclear surface.

Reproducing the intricate pattern of the size of an atomic nucleus, or charge radii, along the calcium chain, has been a challenge for decades. Better understanding the calcium charge radii will help develop a complete atomic-nuclei model. Such a model will enable researchers to answer fundamental questions, such as how many nuclei there are and how heavy a nucleus can be. The model also should help researchers better understand neutron stars. Laser spectroscopy experiments and the team’s improved theory will be essential to interpret nuclear radii at the Facility for Rare Isotope Beams, under construction at MSU.

Led by NSCL Graduate Assistant Andrew Miller, a team measured the charge radii of three proton-rich calcium isotopes (with mass numbers A=36, 37, 38) for the first time. The radius of a calcium nucleus is small, about 0.0000000000000035 meters (or 3.5 femtometers), and the local variation between adjacent isotopes is 200 times smaller still. Moreover, the proton-rich calcium isotopes are rather short-lived. For example, calcium-36 exists for just one tenth of a second. The team measured the radii using the laser spectroscopy technique at the Beam Cooler and Laser Spectroscopy (BECOLA) facility at NSCL. The team found the nuclei to be very compact and much smaller than previous theories, which presents a new puzzle. To interpret the new data, the team developed an improved theory that takes into account nucleonic superfluidity and weak binding effects. The improved theory explains the general trend of charge radii from calcium-36 to calcium-52. Laser spectroscopy experiments at BECOLA and the improved theory will play an even more essential role in the determination and interpretation of nuclear radii at the Facility for Rare Isotope Beams as researchers work toward development of a global nuclear model.