With four moving rows of magnets, the Delta undulator can create circularly polarized, or spiraling, light.

Electrons wiggle between two rows of magnets in a traditional undulator, creating X-rays. These X-rays, or light waves, are linearly polarized. 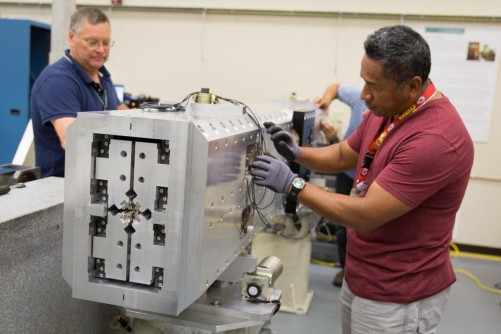 Newswise — A new device at the Department of Energy’s SLAC National Accelerator Laboratory allows researchers to explore the properties and dynamics of molecules with circularly polarized, or spiraling, light.

The use of polarized light is important in the study of many molecules and processes that affect our everyday lives. It can be used to tell the difference between chiral molecules that have “left-handed” and “right-handed” variations, which affects everything from your sense of smell and taste – such as the difference between oranges and lemons, or spearmint and caraway seeds – to life-altering drugs such as thalidomide, in which one version helps ease nausea, but the other can cause abnormal limb growth in unborn children.

With the new Delta undulator, the Linac Coherent Light Source (LCLS) X-ray laser can now be tailored to look at changes in magnetic materials happening faster than a trillionth of a second, as well as fleeting processes that involve chiral compounds central to areas of biological and chemical research. LCLS is a DOE Office of Science User Facility.

“We have already used these X-rays in a couple of studies, and the researchers seemed quite happy with the result,” said James MacArthur, a physics graduate student at Stanford University and part of the SLAC team that built the Delta undulator.

How Spiraling Light Is Made

LCLS generates extremely short, bright pulses of X-ray laser light by sending an electron beam through what’s called an undulator. The undulator contains pairs of magnets that force the electrons to wiggle. This motion gives off energy in the form of X-rays, which interact with the electron beam to form laser pulses that can be used for experiments.

With the Delta, four rows of strong magnets shift to polarize X-rays in a linear, elliptical, or circular fashion.

Scientists can use the spiraling light to reveal the orientation of molecules in certain materials, and even provide subatomic details as fine as electron distribution and spin.

Over the past few decades, the ability to control the polarization of light has led to many breakthroughs using optical lasers. Researchers in Italy recently extended this ability into the extreme ultraviolet regime, using the FERMI Free Electron Laser. The beam at LCLS now opens doors to experiments using X-rays, which are able to probe matter in wholly new ways.

There are several types of experiments made possible by circularly polarized light. People who study magnetic storage for computing, for example, use spiraling light to watch magnetization changes to develop new methods and materials for faster and more compact storage devices.

Now, with the power of the world’s strongest X-ray laser, the spiraling light can be delivered in extremely short and intense pulses over a wide range of energies.

“We can now study the dynamics of ultrafast magnetization in a more substantive and specific way than was previously possible,” said Daniel Higley, an applied physics graduate student at Stanford. Higley is part of the Stanford Institute for Materials and Energy Sciences (SIMES), a joint institute between Stanford and SLAC.

“One of the key things about using X-rays is that they’re quite specific, tuned to distinct energies. So we can study, in this case, what the magnetization dynamics are for individual chemical elements,” Higley said. “And the short pulses produced by an X-ray laser allow you to take a snapshot of things that happen very fast.”

The researchers can also gather the needed data quickly. The spiraling light produced by the Delta is nearly 100 percent polarized and orders of magnitude brighter than light produced by any other type of X-ray source with such short pulses. This enables measurement of ultrafast magnetism with unprecedented accuracy and speed. The team described such measurements in a recent Review of Scientific Instruments paper.

Scientists can also use spiraling light to probe chiral molecules, those with “right-handed” or “left-handed” structures. These subtle differences in arrangement are key to understanding the function of many substances in biological and chemical research, including certain amino acids and sugars, pharmaceuticals and pesticides.

This light can be used to study how X-rays trigger precise, fleeting changes in chiral molecules like amino acids, and researchers can create snapshots of how radiation damages the molecular building blocks of our bodies.

The first Delta undulator was built at Cornell nearly a decade ago. For the LCLS version, the SLAC team, led by Heinz-Dieter Nuhn, wanted to build a much bigger version of the Cornell prototype.

But they could not copy the original exactly; it needed adjustments to work at LCLS.

“We started with some ideas, and found they weren’t as good as we thought,” said Alberto Lutman, head of SLAC’s Delta operations team. “It took us about a year to refine the design and work out the kinks during commissioning. But as a result of all that effort, it’s gotten better and better.”

Bringing the device up to working condition also required a large collaboration. A Cornell scientist who designed and built the first Delta undulator, Alexander Temnykh, gave input on the blueprint and initial tests. Colleagues at Germany’s DESY and the European X-ray Free-Electron Laser helped provide the measurements needed to calibrate the new equipment.

One of the design challenges related to size. Researchers at LCLS typically use 30 to 50 meters of undulators to produce a high-quality X-ray beam.

“The Delta undulator is only 3.2 meters long,” MacArthur said. “So we had to come up with a way to produce a lot of radiation and create a high degree of circular polarization from a short undulator.”

In a Nature Photonics paper published in May, the Delta team reported that the undulator can produce high-intensity light at nearly 100 percent polarization.

“It wasn’t known how well the undulator would work as we were developing it,” Lutman said. “It works, and it works nicely.”

What’s Next for the Delta

Research and development is underway for multiple Delta-II undulators that will produce spiraling light compatible with the beam of LCLS-II, the next generation of LCLS. LCLS-II will be 10,000 times brighter, on average, than LCLS, enabling high precision studies of even finer aspects of ultrafast magnetism and chirality.

The Delta team will develop even more ways to manipulate polarized light. One scheme involves delivering X-rays of different energies and polarizations in a single experiment.

“The entire Delta team has worked hard to develop a way we can produce circularly polarized light that’s custom-made for research needs,” said Mike Dunne, LCLS director. “We’re excited to be able to offer this new capability to the scientific community."

Caption: Electrons wiggle between two rows of magnets in a traditional undulator, creating X-rays. These X-rays, or light waves, are linearly polarized. 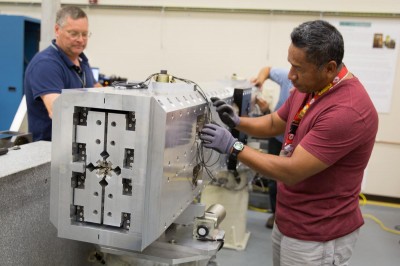