Work Together or Go It Alone? Microbes Are Split on the Answer

Microbes often evolve and work together to thrive in no oxygen situations, hinting at how carbon and energy flow just below soils and sediments. 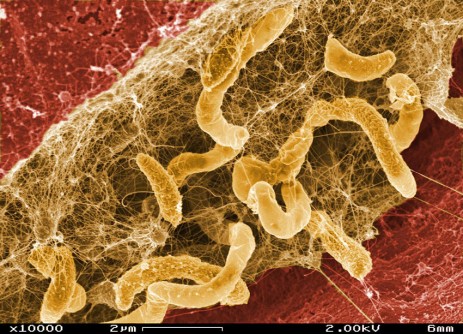 A common sulfate-reducing bacterium (shown above) co-evolves with another microbe to create a synergistic situation where both microbes thrive in the subsurface without oxygen, which does not penetrate below the top few centimeters of sediment. In 21 separate experiments, the synergistic relationship evolved between the two organisms 13 times. Photo is a color-enhanced digital micrograph of a black and white scanning electron microscope image.

Just below the surface of soils and sediments, large portions of Earth’s biosphere exist in the absence of oxygen. The microbial inhabitants of these low or no oxygen environments, called anoxic environments, drive planetary biogeochemical cycles, and their metabolic activities impact the bioavailability of nutrients, metals, and environmental contaminants. To survive, many microbial species have evolved collaborative symbiotic lifestyles that allow two organisms to perform metabolic processes that neither could do alone (that is, “mutualistic syntrophy”).In a study led by Lawrence Berkeley National Laboratory, researchers found a remarkable parallel evolution between two microbial species. The results suggest a trade-off between working together to thrive and maintaining the flexibility to survive alone.

Understanding the molecular factors governing the formation of mutualistic syntrophic associations and the performance of the evolved microbial strains under changing environmental conditions could provide valuable new insights into ways that carbon and energy flow through anoxic environments. Experimental results demonstrate the importance of tradeoffs between growth efficiency and metabolic flexibility during the evolution of a symbiotic partnership.

In an international study led by Lawrence Berkeley National Laboratory scientists, an experimental evolutionary system was constructed that pairs a common sulfate-reducing bacterium, Desulfovibrio vulgaris, with a methane-producing archaea, Methanococcus maripaludis, neither of which is known to grow via mutualistic syntrophy in nature. Experimental conditions were manipulated so that neither organism would have access to an energy source it could use independently. In 21 separate experiments over 1000 generations, mutualistic syntrophies that closely resembled associations observed in nature evolved between the two organisms 13 times. In these syntrophies, consumption of lactate (a common product of fermentation in anoxic environments) by D. vulgaris provided hydrogen and carbon dioxide to M. maripaludis, which in turn produced methane and maintained an energetic environment favorable to continued consumption of lactate by D. vulgaris. The partners quickly improved their performance efficiency for coupled syntrophic growth, but, in many cases, D. vulgaris lost its ability to grow in the absence of M. maripaludis even under normal growth conditions. By sequencing the genomes of the evolved strains from the various experimental replicates, D. vulgaris was determined to have quickly accumulated loss-of-function mutations, particularly in three key sulfate-reduction genes needed for independent growth. The team is examining the relationship between the loss of capacity for independent growth and improved symbiotic performance. These results provide a fascinating glimpse at the molecular underpinnings of a natural selection process.

This work was supported by the National Science Foundation (NSF; Grants 1257525, NSF-1262637, and NSF-1330912); Office of the Vice President for Research at the University of Oklahoma; and the Collaborative Innovation Center for Regional Environmental Quality at Tsinghua University, China. Research also was conducted as part of the Ecosystems and Networks Integrated with Genes and Molecular Assemblies (ENIGMA) project, which is supported by the Office of Biological and Environmental Research within the U.S. Department of Energy Office of Science, under Contract DE-AC02-05CH1123.