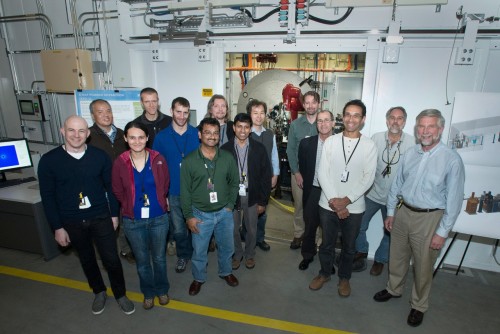 The beamline group at XPD during their open house for first light at the beamline. They are led by Eric Dooryhee, the Powder Diffraction Beamline Group Leader, and Associate Laboratory Director for Photon Sciences and NSLS-II Project Director Steve Dierker. Within the beamline hutch behind them stands the specially designed robotic sample changer, which will allow for high through-put data collection at the beamline.

Newswise — On November 6, Eric Dooryhee walked into a crowd of people excitedly talking at the X-ray Powder Diffraction (XPD) beamline beaming an enormous smile. The group broke into applause for the enormous achievement they had gathered to celebrate: the operators had opened a shutter to the electron storage ring of the National Synchrotron Light Source II and captured light for the first time at the XPD beamline. It was the second beamline at NSLS-II to achieve x-ray beam.

“This is a big day for all of us,” said Dooryhee, the Powder Diffraction Beamline Group Leader. The list of acknowledgements he made reflected the huge effort of many support groups across the Photon Sciences Directorate and beyond, that made the milestone possible: administration and procurement staff, surveyors, riggers, carpenters, vacuum specialists, mechanical and electrical utilities technicians, equipment protection and personnel safety staff, x-ray optics metrology experts, scientists, designers, and engineers. “We couldn’t have achieved our first light without the commitment and support of many collaborators around the Lab, including work with Peter Siddons and his group, who are developing several state-of-the-art detectors for XPD.”

The complexity of this accomplishment came through when Dooryhee talked about the effort put in by Wayne Lewis, the controls engineer for XPD.

“How many motors, vacuum gauges and sensors did you have to take ownership of? Hundreds?” Dooryhee asked. Lewis wryly smiled and responded, “Yeah, a few.”

It was Lewis who ultimately opened the shutter, allowing the white x-ray beam for the first time to travel through a diamond window and several other components until it was purposely intercepted by a beam stop. Both the window and the beamstop emitted a bright fluorescent light once struck by the x-rays, and the x-ray footprint at several locations down the beam pipe could thus be imaged and shown on large screens to everyone present.

Eventually, once commissioning starts, a monochromator will select one part of the white beam at a particular color (or wavelength). This one-color (monochromatic) x-ray beam will go past the white beam stop and will be reflected off a four-and-a-half-foot long mirror and over to the sample.

“As we open the shutter, the beam is spot on,” said Dooryhee. “We find the beam is very stable, and we are extremely happy with these start-up conditions, thanks to the work accomplished by the Accelerator Division. This concludes 5 years of preparation and installation, and now is the beginning of a new phase for us. We have to commission the entire beamline with the x-rays on, get beam safely into the experimental station, and transition to science as soon as we can.”

Part of this “open house” celebration at XPD was a demonstration of the 250-pound robotic sample changer, which will operate within the lead-lined hutch while the x-ray beam is on. This robot will be able to perform unmanned and repetitive collection of data on a variety of sample holders in a reliable, reproducible and fast way. XPD is designed with high throughput efficiency in mind.

The robot will also enable landmark experiments of radioactive samples, like those proposed by Lynne Ecker of Brookhaven’s Nuclear Science and Technology Department. Ecker was awarded $980,000 from the U.S. Department of Energy’s Nuclear Energy Enabling Technologies program that will enable cross-cutting research at XPD and will fundamentally improve the safety and performance of nuclear reactors.

“BNL is a truly outstanding environment and our chance with NSLS-II is to interact with very high-level scientific collaborators across the Laboratory, that will enable XPD to host premier work from the Center for Functional Nanomaterials, the Nuclear Energy group, Chemistry, and Physics,” said Dooryhee. “And XPD is also planning to accommodate a part of the high-pressure program at NSLS-II that includes a large volume press and diamond-anvil cells that were previously in use at NSLS, in collaboration with the COMPRES consortium and Stony Brook University.”

The XPD beamline research will focus on studies of catalysts, batteries, and other functional and technological materials under the conditions of synthesis and operation, and Dooryhee is optimistic about the science to come. He is also excited about the intersection of XPD’s scientific program with Brookhaven’s Laboratory Directed Research and Development (LDRD) program. “Young, active, committed scientists will have access to our beamline, and will help us develop new capabilities. Current LDRD-XPD partnerships have already led to the invention of a novel slit system for probing the sample with x-rays at well controlled locations and are helping develop a new method called “Modulation Enhanced Diffraction.”

Just before publication of this feature, Dooryhee reported that the XPD team managed to condition and focus the x-ray monochromatic beam after only three weeks of commissioning. Shown here is the first diffraction image from NSLS-II:

The very first scientific sample run on XPD is a new material system, "TaSe2-xSx " — Sulfur-doped Tantalum Selenide — that is being studied by Cedomir Petrovic in the Condensed Matter Physics and Materials Sciences department at Brookhaven.

At low temperature, electrons in both the pure TaSe2 and TaS2 compounds spontaneously form into charge density waves (CDWs), like ripples on the surface of a pond, but characteristics of the waves (such as the wavelength) are different. The question is, when you vary composition smoothly from one end of the series to the other end (meaning vary x in TaSe2-xSx), how do the waves cross over from one to the other? The surprise is that in between the waves disappear and are replaced by superconductivity – the ability of the material to conduct electricity with no resistance.

“It is like mixing red paint and white paint, and instead of getting pink you get blue after mixing,” said professor Simon Billinge, joint appointee with Brookhaven and Columbia University, who has been the spokesperson and the chair of the beamline advisory team for the XPD beamline since the inception of the project. “The data from XPD provides crucial information about how the atomic structure varies with composition which is used to understand the delicate interplay of CDW and superconducting behavior in these materials.”

“As well as being interesting in their own right, these studies at XPD are important to understand the phenomenon of unconventional high-temperature superconductivity, currently our best hope for technological devices for low loss power transmission, where a similar interplay of CDW and superconductivity is seen,” added Dooryhee.