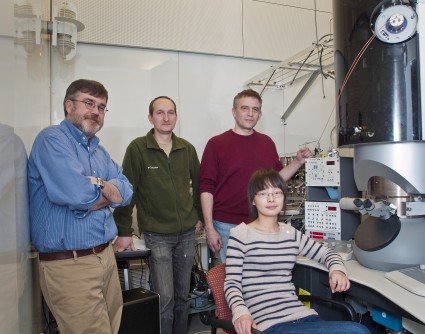 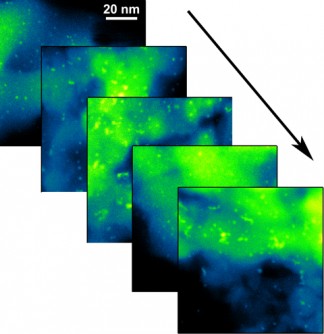 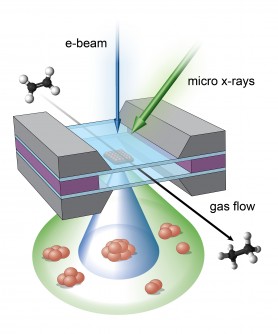 Illustration of the micro-reactor showing the complementary imaging areas of the electron beams (blue) and x-rays (green), which combine to reveal a full portrait of the real-time reaction.

A team of scientists used a newly developed reaction chamber to combine x-ray absorption spectroscopy and electron microscopy for an unprecedented portrait of a common chemical reaction. The results demonstrate a powerful operando technique—from the Latin for "in working condition"—that may revolutionize research on catalysts, batteries, fuel cells, and other major energy technologies.

"We tracked the dynamic transformations of a working catalyst, including single atoms and larger structures, during an active reaction at room temperature," said study coauthor and Brookhaven Lab scientist Eric Stach. "This gives us unparalleled insight into nanoparticle structure and would be impossible to achieve without combining two complementary operando techniques."

The results were published online June 29, 2015, in the journal Nature Communications.

To prove the efficacy of this new mosquito-sized reaction chamber—called a micro-reactor—the scientists tracked the performance of a platinum catalyst during the conversion of ethylene to ethane, a model reaction relevant to many industrial synthesis processes. They conducted x-ray studies at the National Synchrotron Light Source (NSLS) and electron microscopy at the Center for Functional Nanomaterials (CFN), both DOE Office of Science User Facilities.

"The size, shape, and distribution of catalysts affect their efficiency and durability," said study coauthor Ralph Nuzzo of the University of Illinois at Urbana-Champaign. "Now that we can track those parameters throughout the reaction sequence, we can better determine the ideal design of future catalysts—especially those that drive energy-efficient reactions without using expensive and rare materials like platinum."

Hidden behind the curtain

In transmission electron microscopy (TEM), a focused electron beam passes through the sample and captures images of the nanoparticles within. This is usually performed in a pristine environment—often an inactive, low-pressure vacuum—but the micro-reactor allowed the TEM to operate in the presence of an atmosphere of reactive gases.

"With TEM, we take high-resolution pictures of the particles to directly see their size and distribution," said Stach, who leads CFN's Electron Microscopy Group. "But with the micro-reactor, some signals were too small to detect. Particles smaller than a single nanometer were hidden behind what we call the resolution curtain of the technique."

Another technique was needed to peer behind the curtain and reveal the full reaction story: x-ray absorption spectroscopy (XAS).

In XAS, a beam of x-rays bombards the catalyst sample and deposits energy as it passes through the micro-reactor. The sample then emits secondary x-rays, which are measured to identify its chemical composition—in this instance, the distribution of platinum particles.

"The XAS and TEM data, analyzed together, let us calculate the numbers and average sizes of not one, but several different types of catalysts," said coauthor and Yeshiva University scientist Anatoly Frenkel, who led the x-ray experiments. "Running the tests in an operando condition lets us track broad changes over time, and only the combination of techniques could reveal all catalytic particles."

The new micro-reactor was specifically designed and built to work seamlessly with both synchrotron x-rays and electron microscopes.

"Everything was exquisitely controlled at both NSLS and CFN, including precise measurements of the progress of the catalytic reaction," Frenkel said. "For the first time, the operando approach was used to correlate data obtained by different techniques at the same stages of the reaction."

A relatively straightforward mathematical approach allowed them to deduce the total number of ultra-small particles missing in the TEM data.

"We took the full XAS data, which incorporates particles of all sizes, and removed the TEM results covering particles larger than one nanometer—the remainder fills in that crucial sub-nanometer gap in our knowledge of catalyst size and distribution during each step of the reaction," Frenkel said.

Added Stach, "In the past, scientists would look at data before and after the reaction under model conditions, especially with TEM, and make educated guesses. Now we can make definitive statements."

The collaboration has already extended this operando micro-reactor approach to incorporate two additional techniques—infrared and Raman spectroscopy—and plans to introduce other complex and complementary x-ray and electron probe techniques over time.

"Each round of data collection took six hours at NSLS, but will take just minutes at NSLS-II," Stach said. "Through Laboratory Directed Research and Development funding, we will be part of the initial experiments at the Submicron Resolution X-ray (SRX) Spectroscopy beamline this summer, dramatically increasing the time resolution of the experiments and letting us track changes in a more dynamic fashion. And that's just one of the NSLS-II beamlines where we plan to deploy this technique." The ethylene to ethane reaction happens at room temperature, but other new micro-reactors can operate at up to 800 degrees Celsius—more than hot enough for most catalytic reactions— and will increase the versatility and applicability of the approach.

In the near future, this same micro-reactor approach will be used to explore other crucial energy frontiers, including batteries and fuel cells.

"We are seeing the emergence of a very powerful and versatile technique that leverages both NSLS-II and the CFN," said Stach, who was recently named Special Assistant for Operando Experimentation for Brookhaven's Energy Sciences Directorate. "This approach complements the many facilities being developed at Brookhaven Lab for operando energy research. Our goal is to be world leaders in operando science." 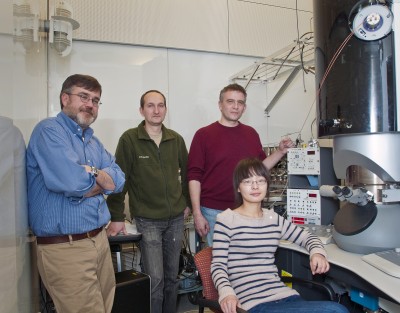 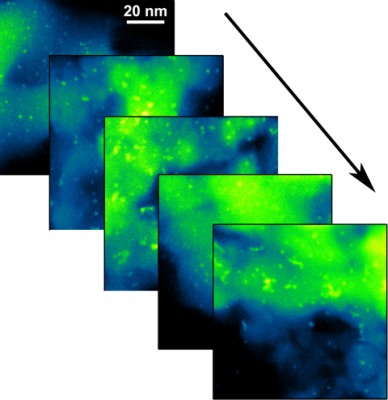 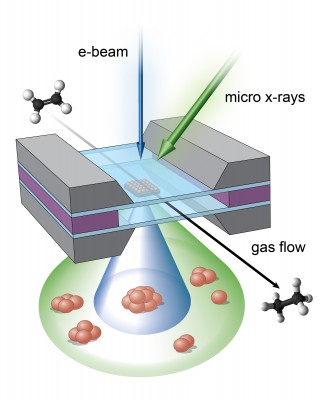 Caption: Illustration of the micro-reactor showing the complementary imaging areas of the electron beams (blue) and x-rays (green), which combine to reveal a full portrait of the real-time reaction.