Claims that "Antifa" or far-left activists have been arrested for setting fires in Oregon, a state hit by devastating wildfires, are false

Oregon is on fire! Pallet Company in Oregon City confirmed Antifa arsonist on camera. Douglas County Sheriff has 6 ANTIFA arsonists in custody. Many fires in Oregon. Obviously there are more to track down and arrest. Governor Kate Brown built this.

Widely shared posts on social media claim members of Antifa, the unstructured far-left movement, have been arrested for setting wildfires in Oregon. This misinformation was even spread by the popular Spotify podcaster Joe Rogan (who has since apologized). These claims are false. law enforcement officers from areas where the arrests were allegedly made have denied they took place, and said calls about the claims are hampering operations.

But the Douglas County Sheriff’s Office said in a Facebook post: “Our 9-1-1 dispatchers and professional staff are being overrun with requests for information and inquiries on an UNTRUE rumor that 6 Antifa members have been arrested for setting fires.”

And Sergeant David Edwins of the Oregon City Police Department told AFP by phone: “As far as the actual city limits go, we have no information on a pallet company having any arson done to it.” 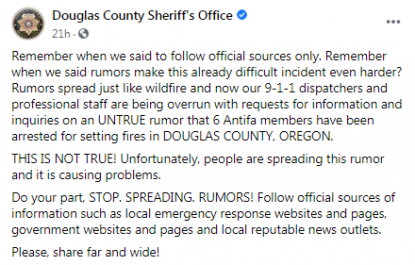 Oregon and other West Coast states are facing wildfires that have left more than two dozen people dead.

Antifa, short for anti-fascist, is a structureless movement which says it is dedicated to fighting fascism online and in public. It has come under increased scrutiny -- particularly from President Donald Trump -- during recent protests against police violence and racism across the US.

The Federal Bureau of Investigation’s Portland office denounced “conspiracy theories and misinformation” that “take valuable resources away (from) local fire and police agencies working around the clock to bring these fires under control.”

“FBI Portland and local law enforcement agencies have been receiving reports that extremists are responsible for setting wildfires in Oregon. With our state and local partners, the FBI has investigated several such reports and found them to be untrue,” it said in a statement.

Claim: Oregon is on fire! Pallet Company in Oregon City confirmed Antifa arsonist on camera. Douglas County Sheriff has 6 ANTIFA arsonists in custody. Many fires in Oregon. Obviously there are more to track down and arrest. Governor Kate Brown built this. Claim Publisher: Twitter (Paul Romero Jr among others) Date of Claim: 2020-09-09 Author of Article: Craig Jones Truthfulness: False

Unfounded claims and misleading statements earn this New York Post story a rating of False. Several red flags raise doubts about its authenticity, and the allegations have yet to be independently verified and reported.

President Donald Trump participated in a town hall hosted by Savannah Guthrie of NBC News on October 15 in Florida. He claimed that Biden wants to raise taxes on “everybody” including “middle income” people. This is false. Joe Biden has vowed he won’t raise federal income taxes on anyone making under $400,000 a year.

We rate this claim as false. As we mentioned in a previous Fact Check, more testing does not mean that there's a greater posiitivity rate of COVID-19. The number of positive cases is a simple data point: It shows the total number of people who have received positive COVID-19 test results. if this was just a case of more testing, the positivity rate should stay relatively consistent — unless the virus is spreading.

An article in the blog "The Federalist" by staff writer Jordan Davidson (and widely shared on social media) claims that a CDC study released in September shows that masks and face coverings are not effective in preventing the spread of COVID-19, and may cause people to become ill. It states a study that showed that the majority infected were mask wearers. It draws this distinction simply because of the fact that the study included many more people who wear masks as compared to people who never wore masks to begin with. The reasoning is flawed since it assumes that masks are mainly intended to protect the wearer from infection.

Sen. Rand Paul misleadingly suggested that much of the U.S. population has immunity to the coronavirus due to previous exposure to similar viruses

Dr. Anthony Fauci and CDC director Robert Redfield testified on the coronavirus response before the Senate on September 23. In questioning Dr. Fauci, Kentucky Senator Rand Paul misleadingly suggested that much of the U.S. population has immunity to the coronavirus due to previous exposure to similar viruses. But scientists say any possible protection is theoretical and can’t be relied upon to control the pandemic.