Biden doesn’t know what on Earth he’s doing or at times where he even is.

Newswise — Earlier this week, former president Barack Obama paid a visit to the White House for an event celebrating the 12th anniversary of the passage of the Affordable Care Act.

Out of context video clips from the event began circulating on social media, first posted by the accounts for the RNC and Newsmax, as well as getting coverage in primetime cable news. The deceptively cut clips of the reception show President Joe Biden mingling among guests at the event, with his actions in the video presented as fodder to accuse the president of being in a state of mental decline.

Thoroughly debunked by Rolling Stone here, these videos, and more importantly, the accompanying commentary, are just the latest in a pattern of clips taken out of context to create the implication that the president is unfit for office.

Taken in proper context, the allegations are not supported by video evidence, earning these claims a rating of false.

“Biden doesn’t know what on Earth he’s doing or at times where he even is,” alleged host Laura Ingrahm, while airing one of the deceptively cut clips.

However, these claims are undermined by what happens mere seconds after the video cuts.

“The only problem is that both clips were taken out of context. Biden does look a little confused in the first clip, but it’s only because he’s looking for someone…The second clip ends right before Biden gets Obama’s attention and introduces him to someone.”

Clear context provided by the uncut video was pointed out by Twitter user @Acyn, after primetime hosts on Fox News ran the deceptive cuts. Providing the uncut video after the clips from Fox News, @Acyn points out the reasonable explanation for Biden’s actions not seen in the cut versions.

A screengrab shows the moment, in the first video, when an allegedly ‘confused’ Biden locates Secretary of the Interior Deb Haaland and invites her to the stage at 0:31 seconds. The second screengrab depicts the moment that Biden, watching as Obama shakes hands with guests, is able to get the former president’s attention and introduce him to someone waiting nearby at 0:09 seconds. 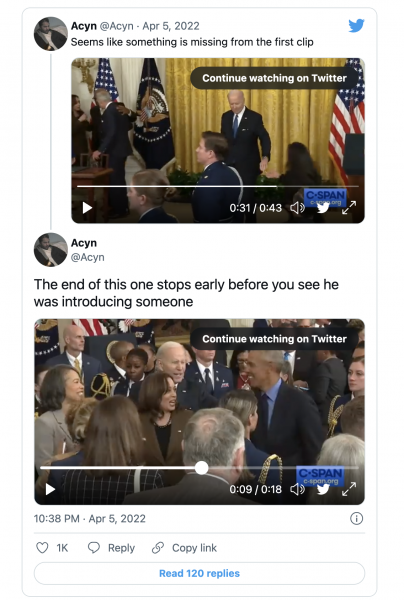 These allegations are not new. For example, during the 2020 Election, Fox News political analyst Britt Hume referred to Biden as ‘senile’ on more than one occassion.

“Senility is not a precise medical term, but is often used in place of the more precise and accepted medical term of ‘dementia,’” Kenneth Langa, Cyrus Sturgis Professor of Medicine at the University of Michigan Medical School, told Politifact here in October, 2020, when they fact-checked Hume’s comments after the presidential debate.

"It is possible that Biden may have more difficulties finding some words and speaking smoothly than when he was younger," Langa told Politifact at the time, “but that does not mean he is "senile" or even that he has "mild cognitive impairment.”

In September, 2020, The Conversation posted an in-depth discussion of deceptive video editing on Snopes.com here, authored by Michigan State University professor Dustin Carnahan, in which he warned, “If the fakers pull ahead of the detectors in this altered video arms race, the 2020 election could come to be seen as the start of an era when people can no longer be certain that what they see is what they can believe.”

Also in September 2020, the U.S. Department of Homeland Security issued a bulletin warning that these attacks were being spread by a Russian disinformation operation.

In conclusion, readers are urged to approach these kinds of claims with a critical eye. This guide by the Washington Post provides some helpful suggestions.

Claim: Biden doesn’t know what on Earth he’s doing or at times where he even is. Claim Publisher: Laura Ingraham, host of Fox News The Ingraham Angle Date of Claim: 2022-04-05 Author of Article: Fact Check Staff Truthfulness: False