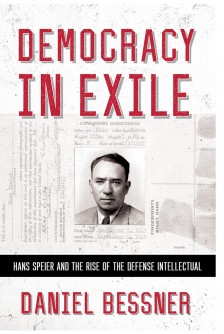 Daniel Bessner’s book “Hans Speier and the Rise of the Defense Intellectual” was published by Cornell University Press.

Newswise — As America's long military experience in Iraq has shown, it is good to have an exit policy — and prudent also to find ways to hold government policymakers accountable for their mistakes.

Such themes come out in "Democracy in Exile: Hans Speier and the Rise of the Defense Intellectual," by Daniel Bessner, an assistant professor in the University of Washington's Jackson School of International Studies. The book was published this spring by Cornell University Press.

The book is a biography of Hans Speier (1905-1990), one of the first powerful minds to exit rising Nazi Germany, in September of 1933. In the United States, he eventually joined the RAND Corporation, a key think-tank in post-war America, which was, Bessner said, "the fount of much of U.S. nuclear strategy in the 1950s and 1960s."

As Bessner began studying this cohort of intellectual émigrés from Germany, it became clear that many of them, including Speier, had worked for the U.S. government during and after World War II. By studying Speier, Bessner said, he explored the process by which such intellectuals exited academe for "the halls of power," and how European and American histories "have informed each other over the course of the 20th century."

What also became clear in studying Speier were "significant blind spots" in how such global thinkers viewed their contributions and their legacy, Bessner said: "Critically, neither Speier nor his colleagues had any vision of how intellectuals should be held accountable when they gave poor advice that led to disastrous policy outcomes."

Such is true, Bessner said, of the career of Wolfowitz, who after helping lead the U.S. into "the disastrous Iraq war," left government to head the World Bank, and in time ended up a foreign policy adviser to failed presidential candidate Jeb Bush. In other words, Bessner said, "Wolfowitz was not held accountable for his failure, which was a problem that Speier and the generation that built the institutions of the foreign policy establishment never considered."

Bessner, whose formal title is the Anne H. H. and Kenneth B. Pyle Assistant Professor in American Foreign Policy, said he has two audiences and goals in mind for the book.

It is for the foreign policy experts themselves — those who work in think tanks like the Council on Foreign Relations and the Brookings Institution, who he would like to be "more modest about their expertise and their ability to predict the future" and give average Americans a stronger voice in policymaking.

But it is also for "ordinary people" not in politics or policy, too, he said — to encourage them to be more active in foreign policy debates and to show that while governments continue to need such experts, they aren't always right.

"Simply put," he said, "I want to make the system of expert governance we presently have — the system that Speier helped create in the mid-20th century — more effective, more democratic, and more just."