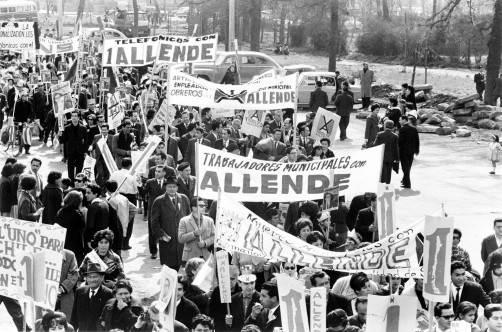 A crowd of people marching to support the election of Salvador Allende for president in Santiago, Chile.

Newswise — In recent years economists have joined historians and others in thinking that institutions, like governments, markets, and firms, are the key to understanding how economies work. From a research standpoint, the challenge is how to study what happens when institutions change.

“When it comes to studying how a change in economic institutions will affect the workings of the economy, history has refused to perform the right experiments,” says economist Samuel Bowles of the Santa Fe Institute, articulating the centuries-old research challenge.

There are a limited number of game-changing events, like the Bolshevik Revolution replacing capitalism by centralized economic planning, or the emancipation of U.S. slaves.  And as these examples suggest, when economic institutions do change, it is usually because much else has changed too, making it difficult to isolate the real causal effects of the institutional changes per se.

With Daniele Girardi of the University of Massachusetts, Bowles hit upon what is as close to a natural experiment on society-wide institutional changes as could be imagined. Collecting new data, the researchers studied how the electoral victory of socialist Salvador Allende in Chile on September 4, 1970, affected the value of firms on the Santiago Stock Market. The outcome was almost entirely unanticipated — especially by the wealthy.

The morning after the election, Chilean businesses woke up to an entirely new economic environment, with across-the-board nationalizations of firms promised by the new government. The value of shares fell by half.

“These effects are gigantic compared to existing studies, that have looked at surprise electoral victories of Democrats or Republicans in the U.S. and Labor vs Conservatives in the UK," Girardi explains. "The difference is that in Chile the capitalist economic system itself was on the table.”

In another newly released paper, Girardi found that across hundreds of close elections in which party economic platform differences were much less than in the Chilean case, a left of center victory decreases stock market values by 5 to 10 percent.

Simon DeDeo (Carnegie Mellon University), who uses computational linguistic methods to study institutional change in the past, remarks: “People rarely tell us what they really think. What’s amazing here is how much a few pages of old stock market listings can reveal: the fears of the bourgeois elite, and their taste for dictatorship.” DeDeo was not involved in the current study.

Bowles says the takeaway message is that we "cannot understand the economy through a lens that is limited to economics; we need to bring in law, politics, history, and the other disciplines.”