A New Angle on Gerrymanders

This map shows a shifting kaleidoscope of partisan advantage, for U.S. Congressional voting districts, since 1972. The size of each state is adjusted according to its number of seats in 2012. “The 2003 Texas redistricting is striking,” notes Greg Warrington who created a new mathematical tool, a declination, used to measure the gerrymandering shown here. States without at least one seat won by each party are shown in gray.

Newswise — In 1812, the governor of Massachusetts, Elbridge Gerry, approved a narrow and winding voting district for the state senate that curved from Marblehead around to Salisbury. It looked like a long-necked salamander, Federalist newspaper editors declared. They labeled the district “The Gerry-Mander,” and the Salem-Gazette warned that it was a “monster brought forth to swallow and devour your Liberties and equal Rights.”

More than two centuries later, the fight over gerrymandering continues. Though there is general agreement that to gerrymander is intentionally drawing voting districts so as to advantage one group over another, the best ways to find and measure this problem are hotly contested.

Now a University of Vermont mathematician, Greg Warrington, has developed a new tool to help ferret out gerrymandered districts. “It’s called the declination,” he says. “Because there is no single standard of what exactly gerrymandering is, there is no one way to test for it. But our measure is better in a lot of ways than the other approaches now being used.”

Analyzing U.S. congressional elections since 1972, Warrington’s method indicates that the most extreme gerrymander favoring Republicans was in the 1980 election in Virginia. For Democrats, it was the Texas election of 1976. In more recent years—2012 to 2016— his analysis shows Pennsylvania, Ohio and North Carolina strongly gerrymandered for Republicans, while Maryland’s and California’s voting districts have been strongly tipped in favor of Democrats.

Warrington’s research was published March 12 in the Election Law Journal and could become an important tool—for both courts and legislatures—in the wake of a pair of U.S. Supreme Court cases now being considered that might outlaw certain partisan gerrymanders.

Like the declination on a compass that shows the angle between magnetic north and true north, Warrington’s declination is also a simple-to-compute angle. It can reveal when a voting district plan treats the 50% threshold of votes—which is the difference between winning and losing, of course—as unusually important. If a state’s voting districts have been drawn without considering whether they will place a party over or under the 50% boundary, a plot of the districts from least Democratic voters to most (or vice versa for Republicans), should make a nice straight line. However, if the line takes a sudden turn at 50%, “watch out,” says Warrington, that can be a signal that districts were drawn unfairly, to claim more seats for one party than the other. 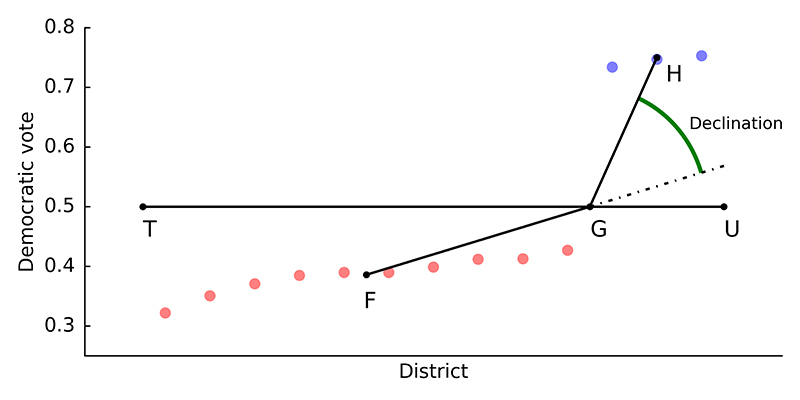 In one example, Warrington has plotted out the results of the 2014 congressional election in North Carolina, above. The ten districts that were won by Republicans all hover in a close-to-flat patch ranging from above 30% to less than 45% Democratic votes, while the three seats that were won by Democrats were each captured by districts with well above 70% Democratic voters. The line to the “center of mass” of the Republican seats below the 50% line is shallow; above 50%, on the Democratic side, the line is steep. In other words, the strongly positive declination suggests that the districts in North Carolina were gerrymandered to favor Republicans.

In a forthcoming follow-on study, Warrington and UVM professor of statistics Jeff Buzas, both in the College of Engineering and Mathematical Sciences, use the declination measure to estimate that the number of seats won in the U.S. House of Representatives was biased in favor of the Democrats prior to the mid-1990s and biased in favor of Republicans since then.

Historically, gerrymanders have been pegged by their shape. Weird-looking, snaking districts that sprawl across the landscape have been viewed suspiciously. Some mathematical approaches have looked, therefore, for measures of compactness as protection against this. However, shape does not necessarily reveal a gerrymander. For example, districts drawn to disenfranchise African Americans and other racial minorities are outlawed by the 1965 Voting Rights Act. Some voting districts, therefore, have been drawn with complex, irregular shapes—like North Carolina’s much-litigated 12th District—to secure minority representation. Sometimes, unlikely shapes promote the goals of democracy. And, conversely, recent research has made clear that gerrymanders can exist without contorted boundaries. “Just as one can be ill and yet not have a fever,” Warrington notes, “so can one have a gerrymander without violating compactness.”

While Voting Rights Districts have been upheld by the U.S. Supreme Court, decades of cases built on a complaint of partisan gerrymandering—claiming that districts were drawn in favor of one or the other of the major U.S. political parties—have been almost entirely unsuccessful in federal court. However, in 2016, a circuit court ruled in the case of Gill vs. Whitford that districts drawn by Wisconsin’s Republican-dominated state legislature were an unconstitutional partisan gerrymander—and the U.S. Supreme Court took up the case last October. Then, in December, the high court added a second related case, Benisek vs Lamone, brought by Republican voters in Maryland. A ruling on both cases is expected this June. If the justices uphold the claims that either state's voting maps are unconstitutional, it could redraw American political life.

A central part of the Gill vs. Whitford case, and topic of conversation among the justices during oral arguments, is a measure called the efficiency gap. Instead of focusing on the shape of voting districts, this analysis considers the distribution of votes. It’s a newly developed mathematical approach that focuses on “wasted votes”—both those votes beyond what one party needs to win and votes cast for a losing candidate. As a recent report from the Public Policy Institute of California notes, “Partisan gerrymanders seek to foist more wasted votes on the other party,” making their own votes more efficient. If the party drawing the voting districts succeeds in this aim, they will “pack and crack” the opposing party: packing their opponent’s voters into a handful of districts that the opponent will win easily while evenly spreading—cracking—the rest of their opponent’s voters across a large number of districts that they will lose by small margins.

While the efficiency gap has been at the center of the current Supreme Court debate, it “unfortunately, in its basic assumptions, requires proportional representation,” Warrington says—and proportional representation is not a constitutional right. (Just consider that Vermont’s Senate delegation has the same number of seats as California’s.) Which is where Warrington’s declination looks to be a better tool.

If the Supreme Court rules that some partisan gerrymanders are unconstitutional, the declination—in combination with measures of compactness, an assessment of the intent of those who drew the maps, and a look at the impact of the redrawn maps—could be a “manageable judicial standard,” Greg Warrington says.  Not only does it avoid “the constitutionality issue presented by the efficiency gap,” he notes, but it also “does not rely on the shape of districts, is simple to compute, and is provably related to the ‘packing and cracking’ integral to gerrymandering."