Aboard the Primary Express: A 2008 New Hampshire Diary 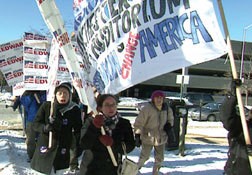 Traveling and sitting with the press, Kendall carefully notes the interactions between the candidates, media and citizens. She's traveling this year with colleague Shawn Parry-Giles, director of the University of Maryland's Center for Political Communication and Civic Leadership.

See their latest dispatches and credentials below and online: http://www.newsdesk.umd.edu/sociss/2008/NHBlogs.cfm

(Jan. 4, 2008, Manchester, NH) The Iowa caucuses have had a more dramatic effect than usual. Among the Democrats, the vote there has given Barack Obama a place in history, as the first African-American to win in the Iowa caucuses, thus becoming a serious contender for the presidency. He now leads among the Democratic candidates. The virtual tie between John Edwards and Hillary Clinton has focused attention of these two candidates as well, with the question of which one will be able to convince the most voters in New Hampshire. The Iowa caucuses have also winnowed out Senators Biden and Dodd from the race for the presidency, as they dropped out last night. Governor Richardson of New Mexico received such a low percentage of the votes, only 2%, even after extensive campaigning and advertising there, that I'm sure his campaign is discussing whether to stay in the race.

Among the Republicans, the picture is much more chaotic, with the victory of Mike Huckabee over Mitt Romney, a virtual tie for third place between John McCain and Fred Thompson and the poor finish of Rudy Giuliani. Romney's loss is particularly striking, as the former Governor of Massachusetts has spent the most among the Republicans, advertising heavily, and has focused on winning in Iowa and New Hampshire.

Today the candidates and media are back in New Hampshire, flying back from Iowa overnight, and all political eyes are on this state. In the last two days, there haven't been many choices of candidates to see here. Only Giuliani, McCain, and Congressman John Kucinich have been campaigning. But suddenly there are speeches, town halls, meet-and-greets, and rallies everywhere. Clinton and Edwards had early rallies the moment they returned. Today I will see Senator Obama at a Concord rally, and may see Richardson answering questions at the Elliot Hospital in Manchester, Huckabee at a rally in Henniker, and Romney or McCain. All the newspapers have front-page stories.

Just a note on the McCain event at Derry last night. He appeared with Senator Joe Lieberman, who has endorsed him. It was a highly successful event, and unusual in the degree of audience participation. Senator McCain not only encourages questions, but even follow-up questions, which makes for a good deal of argument and give-and-take on the issues voters care about. The audience laughed and clapped often. It lasted an hour, which is unusually long, yet with all the participation, even questions from children, the time passed quickly. He and Senator Lieberman discussed so many different issues I can't do it justice in this short blog.

The snow is deep on this brutally cold day (it's 5-below) as I drive around New Hampshire observing the candidates, media and voters in action. The choices of events are slim today, though, with the candidates in Iowa. All that will change tomorrow when the candidates will sweep in with great intensity. John Edwards' day will start at 6 A.M. with a rally in Manchester.

At a Rudy Giuliani event here last night at Hooksett, the attendance was relatively small by campaign standards - approximately 150 members of the public and more than 60 members of the media. It was the first time I'd personally seen him in action. He gave a very low-key presentation, and the audience was polite but showed little enthusiasm.

The Concord Monitor gave his talk extensive coverage, emphasizing his proposal to double the number of U.S. combat troops in Afghanistan. The Associated Press focused entirely on his answer to an audience member's question: Who would he include in his cabinet? Giuliani said he'd use Abraham Lincoln as a model, who appointed his major Republican opponents to the cabinet. The differences in media reporting are the grist for my research.

As an audience member, I'd not have picked either of these things as a focus for a summary of this speech. But then the reporters have a better sense of what - if anything - was new. To me, his main message was his experience and preparedness for meeting national security threats. Yet that's old news - even though it's what he stressed. This is just one example of how these events look different to the candidates, media and voters...

I'm off to a campaign event now at a bakery in Dover where Joe Lieberman is standing-in for John McCain. The two are scheduled to campaign together tonight...

Iowa Caucuses - What Will They Mean? December 31, 2007 By Kathleen E. Kendall, Research Professor, Department of Communication, University of Maryland

Yet Iowa gets our attention. They vote first. Everything before Thursday January 3, all the polls and expert opinion, pales next to the actual votes by citizens in the Iowa caucuses. We already know that the winners of the caucuses in both parties will win by pluralities, not majorities, because there are so many candidates running. And that means that the big struggle immediately after Iowa will be to answer the question: what do these results mean? It could well be that the winner in Iowa will be the campaign which has the most successful interpretation of the results.

Let's look at two possible scenarios, one Democratic and one Republican.

Democrats: If the polls are accurate in predicting a statistical tie among the Democrats, the results could be: Edwards 24%, Clinton 23%, and Obama 22%. Others: 31% (divided among them). How shall we interpret these results? Possible interpretations: (1) Edwards is now the candidate to beat. (2) There is no obvious first choice. (3) Candidates such as Richardson, Biden, Dodd, and Kucinich have little chance and will soon be winnowed out of the race. (4) Since no candidate has more than 25% of voter support, the race is wide open for candidates such as Richardson, Biden, Dodd, and Kucinich to work on their messages and challenge the frontrunners.

Republicans: If the polls are accurate, the results will be close between Romney and Huckabee, with McCain coming in a distant third. Possible interpretations: (1) Romney is a remarkable winner, as he was well behind Huckabee just days ago. Look at his fighting spirit! (2) Huckabee is an amazing fighter, a true underdog, coming from way behind in the fall, and overtaking Romney despite Romney's heavy advertising campaign. (3) The real story is McCain's recovery, to come in third. He has not campaigned much in Iowa , and until recently expected poor results in Iowa. (4) The real story is Bhutto's assassination in Pakistan , and the sudden injection of foreign policy crises into the campaign. Who has the experience to handle such issues?

In short, while there will be actual voting numbers in Iowa on January 3, close plurality votes there will not "speak for themselves." Candidates must find the right story line to shape the results. That may well be the key for survival and success in the fast-moving primaries to follow.

Iowa IntensityDecember 31, 2007By Shawn Parry-Giles, Professor, Department of Communication, University of Maryland Given the closeness of the polls for both the Democratic and Republican presidential races, the spotlight on the Iowa caucuses has reached what appears to be shining with unprecedented intensity, elevating the suspense surrounding the results. With all attention focused on Iowa, such results stand to be even more significant than in past presidential elections and may well have a significant impact not only on New Hampshire but on which candidates emerge as the presidential nominees.

The New Hampshire primary has predicted the victor in the fall election in all but two primaries since 1952 (the exceptions were 1992 and 2000). This extraordinary foresight makes the primary a "crystal ball" for the presidential campaign. Not only does the primary predict the fall winner, but it also serves to set the agenda for the policy issues and questions of character which arise in one state after another in subsequent primaries and caucuses.

This year, the power of New Hampshire's position as the first primary has been challenged by the decision of many states to move their primaries to the February 5th date. Will New Hampshire maintain its dominant role in the face of competition from large states such as New York, Illinois, and California on February 5? Most of the candidates in both parties are assuming that yes, New Hampshire is crucial to their campaigns. They assume that they need to win or do well there.

My own research focus will be on how the media in New Hampshire shape the story of the primary. I'll share my initial observations in early January.

The New Hampshire primaries take on even more significance in the 2008 presidential election because of the open seats in both parties, the lack of a clear front runner in both races, and the closeness of the New Hampshire primary to the Iowa caucuses in a year when the primary season starts earlier than ever before. The Iowa winners will be working hard to continue their momentum in New Hampshire while the second and third place candidates will try to check the front runners' ascension. All of the candidates, their surrogates, and the news media will invade New Hampshire from January 3 through January 8.

Kendall: Research professor of political communication at Maryland and author of "Communication in the Presidential Primaries: Candidates and the Media, 1912-2000." She produced the video "Primaries" on the 2004 New Hampshire Primary.

Shawn Parry-Giles heads the University of Maryland's Center for Political Communication and Civic Leadership and is writing a book about Hillary Clinton and the media.