Arkansas voters indicate they feel better about the economy compared to 2015, but are more concerned about crime, healthcare, politics. 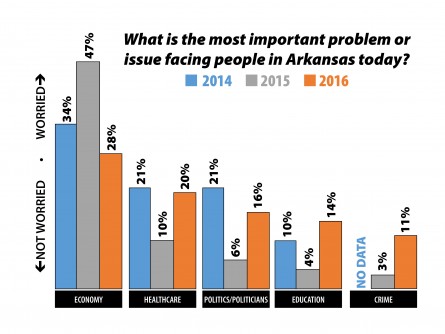 The 2016 Arkansas Poll focused on the presidential race, U.S. Senate race, medical marijuana, abortion, same-sex marriage and the state of the state. It also included a “list experiment” that examined attitudes people might hold but be hesitant to share. The experiment revealed that people may be more bipartisan in their beliefs than publicly known.

“One interpretation is that we prefer to make clear, explicit statements of support for candidates who affirm our desired image (political ideology or social class),” said Andy Brownback, assistant professor of economics. “But we only reveal support for candidates who conflict with our desired image if our support can be kept private. This suggests that Americans may actually be more bipartisan than we care to admit.”

The poll was designed and analyzed by Janine Parry, professor of political science at the U of A. The poll has a track record over its 18-year history of coming within 2 points of actual election outcomes. The full 2016 Arkansas Poll Summary Report, protocols and historic outcomes can be found here.

The poll was conducted through live phone interviews – 40 percent of which were to cell phones – Oct. 18 – 25 with about 800 randomly selected participants.

“The thing I tend to focus on after 18 years and more than 13,000 interviews is the tremendous stability in public opinion,” Parry said. “Other than the shift happening with independents placing them closer to the Republican Party and some movement in the ‘most important issue,’ Arkansans hold the same opinions year after year. That gives me confidence that we’re capturing something real, and not just the noise of any particular election cycle.”

The “most important issue” shift occurred with the 19 percent reduction in concern about the economy over the last year and 10 percent increases in voiced concern over healthcare, politics, education and crime.

In the “list experiment” portion, Brownback and economics graduate student Aaron Novotny wondered if being observed influenced support for political candidates. Respondents were split into two groups that were each read the same four statements about the economy, President George H.W. Bush’s foreign policy, global warming and the NRA. At the end, one group was explicitly asked if they often find themselves agreeing with Donald Trump and the other was queried more discretely.

“When we compared the results for the two groups, there are small, statistically insignificant differences that suggest that people may be more likely to express support for Donald Trump when their support is not explicitly observed,” Brownback said. “But, closer examination revealed something bigger. A significant portion of Clinton supporters (32 percent) expressed agreement with Trump when asked implicitly and support dropped to just 7 percent when they were asked explicitly.”