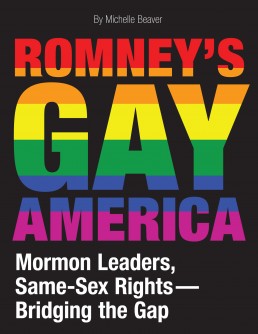 “Romney’s Gay America” debuted at No. 1 on Amazon’s list of gay-and-lesbian nonfiction

Newswise — PHOENIX — It wasn’t long ago that researchers at Mormon-owned Brigham Young University conducted tortuous experiments on gay students in an effort to make them straight. However, those excruciating shock sessions are so secret that they might as well be ancient unknown history. A new book exposes those experiments, predicts what a Mitt Romney presidency would mean for gay rights, and offers solutions for how the Church of Jesus Christ of Latter-day Saints can better deal with homosexuality.

The book, “Romney's Gay America: Mormon Leaders, Same-Sex Rights — Bridging the Gap," debuted last month at No. 1 on Amazon’s list of gay-and-lesbian nonfiction and has been in the top 10 of this category for most of July and August. The author, Michelle Beaver, is a journalist and faculty associate at Arizona State University's Walter Cronkite School of Journalism and Mass Communication.

“There’s a lot about the relationship between gays and Mormons that’s controversial and dramatic,” Beaver said. “But we have plenty of controversy and drama in the world. Introspective conversation: we don’t have as much of that. “Romney’s Gay America” explores all sides of the story. It concludes that the LDS Church should apologize for its past regarding gays, should be more open to gays, and that the whole country should be more open to Mormons.”

Beaver started covering the LDS Church’s relationship with homosexuality in 2002 through an article that won a first-place national award for in-depth reporting from the Scripps Howard Foundation. Gwen Ifill, senior correspondent for the PBS NewsHour, and moderator of Washington Week, called the article “impressive,” and said Michelle Beaver has the best traits of a great journalist including “curiosity, tenacity, and a desire to shed light on under-covered issues.” In that 2002 article, Michelle Beaver broke the story about the aforementioned torturous BYU experiments. She covers this topic in depth in her book and offers solutions for how Mormons can heal a dark past.

An excerpt: “Still mired in times of bobby socks and poodle skirts gone by, in the late 1970s, Brigham Young University’s psychology department unleashed a disciplined and systematic program of painful electric shock therapy of gay students. … For John Cameron, a patient in the study, the experience was so excruciating and humiliating that it haunts him to this day.

“’For a year I thought [the electroshock] had some effect — I convinced myself that such was the case,’” Cameron said. “’But it didn’t change anything except increase my self-loathing. I didn’t know the ramifications of the experiment until years later.’”