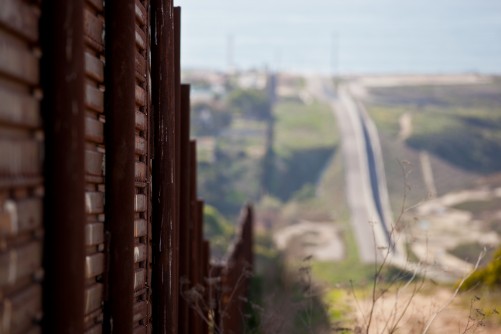 The United States border fence with Mexico shown in 2012 near San Diego, California. A study led by a University of Kansas researcher Nazli Avdan found that since 1900 border fences have reduced the likelihood of a transnational terrorist attack, but the researchers did not examine other issues surrounding borders and immigration as part of the study.

A new study led by Nazli Avdan, University of Kansas assistant professor of political science, has found border fences do reduce the risk of a transnational terrorist attack, though the research leaves open questions about other types of factors. The researchers also did not examine whether fences influence immigration.

Newswise — LAWRENCE — During his successful presidential campaign, Donald Trump rhetorically advocated for building a larger and more complete wall with Mexico. Trump's plans for the wall were focused on immigration policy, but countries have built fences and walls for a multitude of reasons, since the end of World War II, but gaining steam since the fall of the iron curtain.

Nazli Avdan, a University of Kansas assistant professor of Political Science, said political leaders often tout walls as effective against a plethora of threats including terrorism. Walls are appealing in part because they are a visible sign of government taking action. Even if leaders tend to lump together many different threats as justification for construction a border fence or wall, are they really an effective security measures?

A new study Avdan led has found border fences do reduce the risk of a transnational terrorist attack, though the research leaves open questions about other types of factors. The researchers also did not examine whether fences influence immigration.

"We don't' know exactly why it's reductive in the sense that there are complementary mechanisms that are at play, but it appears one of the driving forces is the denial of access at the border of potential terrorist groups or actors," Avdan said.

The findings could have important implications as states in the Middle East and Europe continue to find ways to address the fallout of the civil war in Syria. For several years, the war has created a massive humanitarian crisis of refugees fleeing Syria, and it has created a breeding ground for terrorist groups, like the Islamic State in Iraq and Syria, or ISIS, to seek to access Turkey or European countries.

The study that Avdan co-authored with Christopher Gelpi of Ohio State University appeared recently in the journal International Studies Quarterly.

The researchers documented the number of border fences constructed across the world since 1901, starting with Norway's fence built that year on the border with Sweden. Norway dismantled that fence in 1920.

Since the end of World War II, governments constructed 62 new fences, and 48 were built after the Cold War ended. Although a few fences built during the Cold War were later dismantled, most fences still exist today, including the 2005 one built by the United States on the border with Mexico.

The study did not consider any other issues or factors that also pertain to borders or border crossing, such as immigration, smuggling or illicit trafficking, Avdan said, so the findings are narrow in that regard.

"Politicians want to cite the border wall as a security-enhancing tactic, and within that, they might say that it's a counterterrorism tool," she said. "It's convenient to do so, and there are reasons why you would expect that to be the case."

A fence or wall could disrupt the funneling of illicit money or militants to a terrorist group to help support an attack. However, she said, transnational terrorist groups have also adjusted their tactics in some cases by either seeking to inspire homegrown attackers within a country or use legal immigration tactics to enter a country.

While the study's results are positive news regarding preventing transnational terrorist attacks, Avdan said building a fence or wall may have deleterious consequences, often eliciting criticisim from the neighbor country. Walls also influence other factors of migration as well, as countries have seen in the fallout from Syria.

"There is an unfortunate humanitarian component to this where sometimes states build a wall to basically deter the flow of refugees and to make it harder for them to cross borders," Avdan said. "The majority of refugees are not threatening. They are actually fleeing for their lives and some are seeking to escape the very terrorist actors that destination states are guarding their frontiers against. Those who lack the proper documentation to obtain legal entry to destination may then find themselves trapped, or having to resort to the aid of unscrupulous organized crime networks who capitalize on harder borders.”

The findings are also significant because the study challenges the expectations of a borderless world as globalization gained steamed and the Cold War ended. Actually, a majority of the border fences since 1900 have cropped up after the Berlin Wall fell.

"It is also important in the current context where national borders are pretty much fixed," Avdan said. "It's a strong challenge against the notion that globalization should pave the path to a completely borderless world. Walls and fences represent the physical embodiment of the border. States are taking more control."