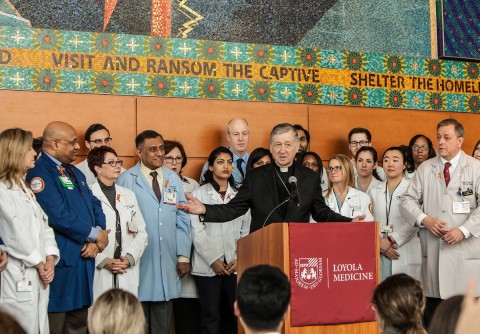 "While debates continue balancing death and maiming against the inconvenience and costs for licensing gun dealers or even the putative rights to own assault weapons, deadly ammunition and other items that do not belong anywhere except in the hands of trained military personnel trained to protect us, I come here today to stand with those who are the real authorities on the epidemic of gun violence," Cardinal Cupich said.

Cardinal Cupich met with doctors and nurses who treat gunshot wounds, then spoke at a press conference along with Mark Cichon, DO, chair of Loyola Medicine's department of emergency medicine, and the Rev. Michael Hayes, Loyola's overnight and weekend emergency department chaplain and a Pentecostal minister.

The gun dealer act (SB 1657) would require employees of gun shops to undergo background checks, allow law enforcement to inspect gun shops and require video security for gun shops to prevent theft. It would help stem the flow of illegal guns in Illinois. A legislative veto override is needed for it to become law.

About 33,000 firearm-related deaths occur each year in the United States, according to the U.S. Centers for Disease Control and Prevention. That's more than the combined total of people who die each year from fires, drownings and motorcycle accidents.

As a Level 1 trauma center, Loyola is an epicenter of the gun violence epidemic. The emergency department treated 283 gunshot victims in fiscal year 2017 – nearly double the number from 2015.

Dr. Cichon said gun violence should be treated as a public health epidemic, just like other health issues. "We need to conduct research and take a scientific approach to combating gun violence," Dr. Cichon said. "Such an approach was successful in treating polio, HIV/AIDS and countless other diseases. The same can be true with this plague of violence."

Loyola has formed an interdisciplinary committee to address gun violence as a public health epidemic. Loyola supports victims and their families by, for example, providing retreats for mothers of gun violence victims. Loyola also cares for its caregivers who are on the frontlines every day.

Rev. Hayes said the Gun Dealer Licensing Act "is a common sense measure that would require gun dealers to be held to the same standards as many other businesses – employee background checks and employee training, required record keeping and allowing for regular inspections."

Cardinal Cupich said he has visited social service agencies and other places where the archdiocese is addressing the root causes of violence; walked for peace in neighborhoods where killings occur weekly; blessed a caravan of young people leaving for Washington, D.C. "to demand their right to life" and traveled to Springfield "to beg for the common sense gun control measures civilized nations around the world enjoy but for which we wait, largely in vain."

But Cardinal Cupich said nothing has affected him so much "as the nights I spent praying and weeping with the families of gunshot victims. Their pain was palpable, their voices passionate and their cause contagious."