Snail mail ballots have a long history of success, says UNLV historian Michael Green, so why all the controversy? 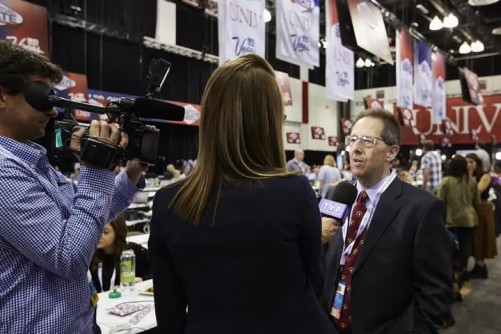 Abraham Lincoln. The country’s 16th president is known for many things: Signing the Emancipation Proclamation. Appearing on the $5 bill. Helping to usher in the modern-day practice of mail-in voting.

Not familiar with that last one? UNLV professor Michael Green to the rescue! He’s a historian who specializes in the Civil War era, which is right around the time mail-in ballots became a prominent piece of U.S. history.

Amid the controversy over absentee voting in light of the pandemic and swirling accusations of potential voter fraud ahead of the 2020 election, we checked in with Green for a primer on the U.S. Postal Service and its entry into the wide world of politics.

Here, he weighs in on the history of mail-in voting, the rationale behind why some states allow it, and factors at play in the current fight against it.

Has the USPS been handling absentee and mail-in ballots since the days of the Pony Express, and did the process originate here or in England?

It didn’t exactly begin with the Pony Express, though it was during that era. We know that as early as 17th-century Massachusetts, some people could send in their ballots, and it also happened a little during the Revolutionary War. But the Civil War, which began at about the same time as the Pony Express, really marked the beginning of absentee or mail-in voting. Bear in mind that by the Revolution, most of those who could vote were white men with property, and the U.S. was well ahead of England in terms of democratizing the vote.

Why and who first determined the need for mail-in voting?

The Civil War really did it. So many soldiers were far from home, and the war was of such a larger scale than any previous military action (such as the War of 1812 or the Mexican-American War) that officials agreed on the need to do something to enable those in military service to vote. So there were clerks and other officials at the camps who allowed them to vote absentee — not exactly mail-in, but close.

Soldiers in 20 states — the Union had 25 by Election Day — were allowed to vote from afar. Abraham Lincoln strongly supported this because he wanted the soldiers to be able to vote, and he was hoping, obviously, that they would vote for their commander-in-chief—which they did, in large numbers. It also may be worth remembering that Lincoln was concerned enough about his prospects for reelection that he favored adding a new state in 1864 that might give him three needed electoral votes: Nevada.

How many states do not allow mail-in voting, and what are some of the common rationales behind those decisions?

Every state allows absentee voting or mail-in voting in some form. Five states have been doing it exclusively, and others have followed suit. Nevada now has mail-in voting but allows in-person voting on Election Day and in early voting. Five states allow mail-in or absentee voting only with an excuse, such as illness or military deployment: Texas, Louisiana, Mississippi, Tennessee, and Indiana. The arguments range from the old saw that “you should show up to vote” to the canard that there’s more fraud.

I do think it’s worth considering that in each of the five states in question, Republicans outnumber Democrats, and Republicans are less inclined toward making voting easier than Democrats are.

How have financial, legislative, pandemic, and other issues impacted the USPS in general and, consequently, its ability to handle the increasing volume of election materials over the years?

The current postmaster is facing controversy because he has taken steps that appear to have slowed down mail delivery, which can have a negative effect on mail-in voting. That has an impact as does the legal change in 2006 that required the USPS to pre-fund health benefits for future retirees. But other factors have negatively impacted the USPS as well. Email and social media are more popular forms of communication, and with them came a reduction in the advertising and letter-writing from which the USPS made money.

What are some of the main arguments for and against mail-in voting that are swirling this election cycle? How do the historical facts help support or debunk these myths? Is this controversy new, or has it cropped up during other election years?

Republicans have claimed that voter fraud, and the possibility of it, is greater with mail-in voting, but in fact states that have turned to voting by mail have found no increase in fraud. Further, they have tried to distinguish between voting by mail and “absentee” voting, when there is no difference, except that those states that have gone to voting by mail send all registered voters a ballot, instead of just those who request one because they might not be able to vote in person. President Trump also claimed that voting by mail benefited one party over the other, but studies have found this to be untrue, and other Republicans have supported vote by mail.

The controversy is newer in the sense that five states conduct their elections exclusively by mail and others have followed because of the pandemic. They have done it long enough now to give us ample evidence showing a lack of fraud in mail-in voting.

A popular argument, mainly on the Republican side, is that if you can go to the market amid the effects of the pandemic, you can go to vote. That makes sense on one level. On another level, we should make voting as easy and appealing as possible. Voter turnout today is nowhere close to what it was in the 19th century, when it seemed more of a civic duty and actually contributed to social life—in those days, you had fewer ways to meet people and less technology to keep yourself amused, so political involvement was more popular.