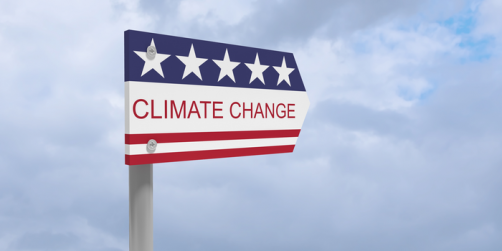 Even though Florida Democrats register a higher belief rate (96 percent) than do residents affiliated with the GOP (88 percent), the latter group’s share appears more than sufficient for Republican lawmakers to feel that openly acknowledging the science of climate change will not erode their popular support. 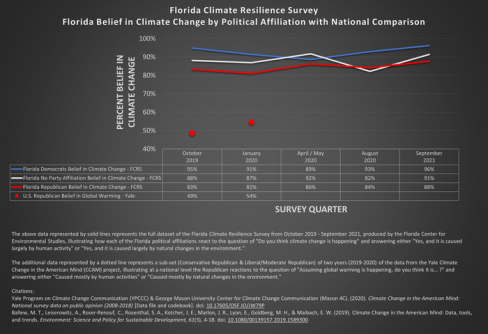 Newswise — Belief in climate change among Florida Republicans has climbed to nearly 9 out of 10 adults, apparently trending upwards, according to a new analysis of five sequenced surveys since 2019 conducted by researchers at Florida Atlantic University. The climate change issue may therefore no longer be an effective campaign trail theme for the state’s party leaders as both parties gear up for the mid-term elections.

Even though Florida Democrats register a higher belief rate (96 percent) than do residents affiliated with the GOP (88 percent), the latter group’s share appears more than sufficient for Republican lawmakers to feel that openly acknowledging the science of climate change will not erode their popular support. The size of these numbers suggests no significant partisan divide on the question. Party affiliation is, however, linked with differences of opinion about the cause of climate change: approximately half of Florida Republicans, compared to three-fourths of Florida Democrats, believe climate change is largely a human-caused issue. This distinction may explain why the state’s Republican leaders appear willing to discuss climate change solutions but not willing to reference the underlying reasons for the changing climate.

These overarching general beliefs are echoed by respondents’ support for or against specific climate-related policies. For example, nearly three quarters (72 percent) of Floridians, including 60 percent of Republicans, support teaching climate change causes, consequences and solutions in K-12 classrooms, and close to half (47 percent) are willing to pay $10 per month to strengthen Florida’s infrastructure to weather hazards. The tax question does not appear to be linked to age or race, but does vary by income, with higher-income individuals being more supportive of the tax than lower-income respondents.

“This sequence of results – five surveys since 2019 – begins to paint a picture of Floridians’ attitudes during a period of particularly dynamic political, economic and environmental conditions. During the period of these five surveys, public opinion about climate change was likely shaped negatively by the Trump Administration’s 2017 decision to retract the United States from the United Nations 2015 Paris Climate Accord,” said Colin Polsky, Ph.D., director of the Center for Environmental Studies and a professor of geosciences in FAU’s Charles E. Schmidt College of Science. “Similarly, the importance of climate change for the public was likely diminished in response to new, immediate daily concerns associated with the coronavirus pandemic and economic crises it triggered. As such, these Florida opinion survey results about climate change can be viewed as reflecting public sentiment net of at least two significant external and independent influences on public opinion.”

The latest of the five surveys was conducted in English from Sept. 1-18, by the Center for Environmental Studies at FAU. The sample consisted of 1,400 Floridians, age 18 and older, with a margin of error of +/- 2.62 percent. The data was collected using an online panel provided by GreatBlue Research. Responses for the entire sample were weighted to adjust for age, race, income, education and gender according to the 2019 American Community Survey from the U.S. Bureau of the Census. It is important to remember that subsets carry with them higher margins of error, as the sample size is reduced. FAU’s Business & Economics Polling Initiative assisted with data collection for the first four surveys.

The Florida Center for Environmental Studies (CES), founded in 1994, is an FAU unit designed to advance Florida’s sustainability on wetlands ecology, coastal resilience, and sustainable energy, through strategic research, education, and community engagement activities. To this end, CES employs 13 full-time faculty and staff, several part-time staff, plus a coordinated group of graduate and undergraduate students, actively managing ~$800k in external grants and contracts each year. 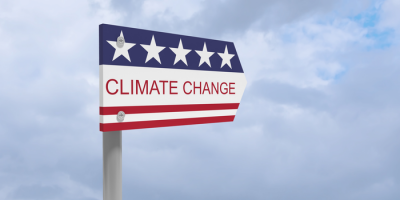 Caption: Even though Florida Democrats register a higher belief rate (96 percent) than do residents affiliated with the GOP (88 percent), the latter group’s share appears more than sufficient for Republican lawmakers to feel that openly acknowledging the science of climate change will not erode their popular support. 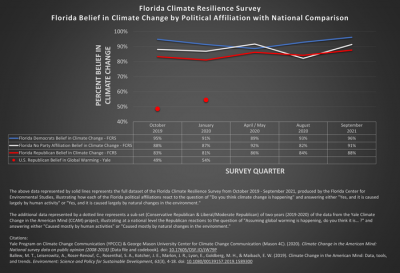