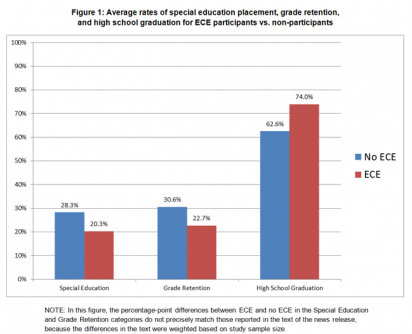 For their study, the researchers analyzed 22 studies published between 1960 and 2016 that examined the effects of classroom-based ECE on three distinct medium- and long-term education outcomes: special education placement, grade retention, and high school graduation. Those studies rigorously evaluated high-quality ECE programs that often focused on multiple areas of student development, such as health, cognitive, social-emotional, and academic functioning.

“It is exciting that our results show that the benefits of early childhood education are sustained through elementary school and beyond,” said coauthor Dana McCoy, an assistant professor at the Harvard Graduate School of Education. “These results provide further evidence for the potential individual and societal benefits of expanding early childhood education programming in the United States.”

“Numerous studies have determined the importance of high-quality early education in supporting children’s cognitive ability in language, literacy, and math, along with social skill development and emotional growth,” said McCoy. “This analysis contributes to the existing evidence by showing how the benefits of early childhood education can persist for years.”

“We were surprised by how consistent our findings were, given the diversity of the studies in our analysis,” said McCoy. “The studies we looked at examined a variety of programs serving children from different backgrounds that were implemented across five decades. The common thread is that these programs are high in quality.”

Over the past several years, financial investments in public ECE have risen rapidly. In 2016, state investments in early childhood education totaled $7.4 billion to support nearly 1.5 million three- and four-year-olds.

However, other research has found that more than half of low-income three- and four-year-old children remain out of center-based care. Negative education outcomes are much more frequent for children growing up in low-income families. 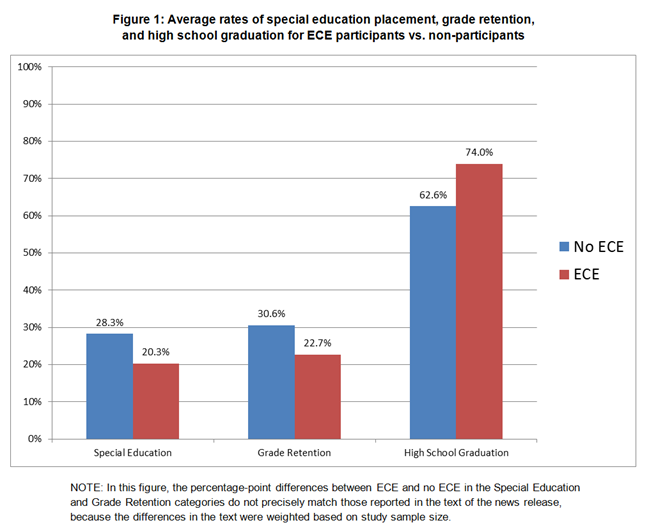 Approximately 6.4 million children in the United States are in special education classes and more than 250,000 are retained each year, with annual per-pupil expenditures for special education and retention amounting to more than $8,000 and $12,000, respectively. In addition, approximately 373,000 youth in the United States drop out of high school each year, with each dropout leading to an estimated $689,000 reduction in individual lifetime earnings and a $262,000 cost to the broader economy.

“Devoting resources to these types of high-quality early education programs that can prevent negative outcomes is not only important for supporting individual children’s well-being but also makes financial sense,” said McCoy.

Funding note: This research was supported by the Institute of Education Sciences at the U.S. Department of Education and by the National Institutes of Health.

About AERA The American Educational Research Association (AERA) is the largest national interdisciplinary research association devoted to the scientific study of education and learning. Founded in 1916, AERA advances knowledge about education, encourages scholarly inquiry related to education, and promotes the use of research to improve education and serve the public good. Find AERA on Facebook and Twitter.

This release is available online.