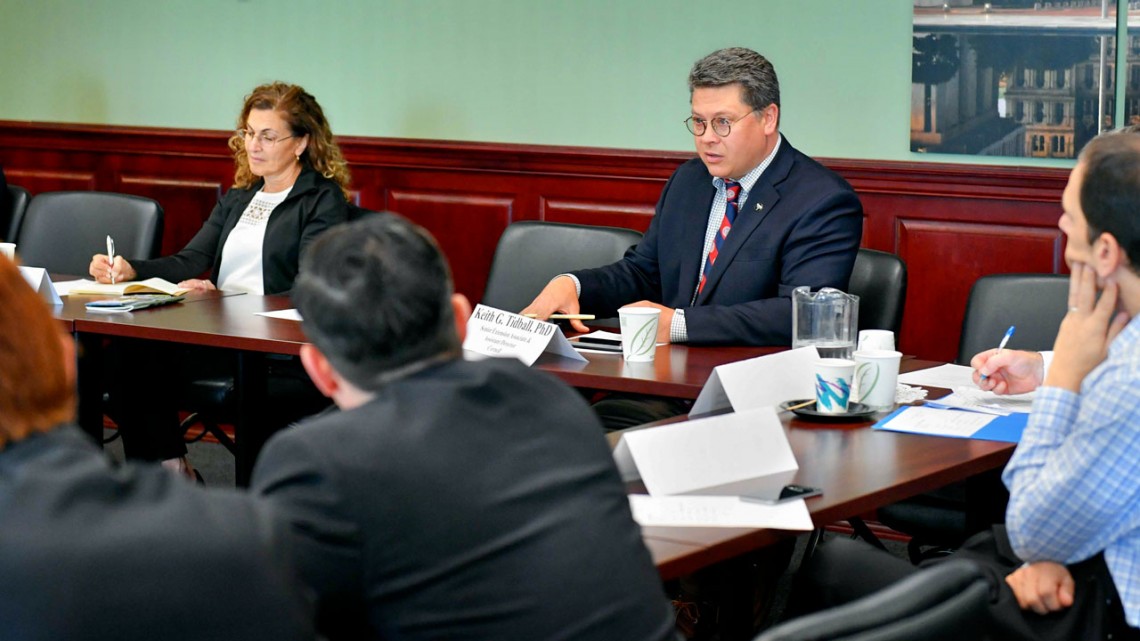 Keith Tidball, second from right, senior extension associate in the Department of Natural Resources, advises state legislators on the therapeutic benefits of nature for veterans.

Newswise — ITHACA, N.Y. – After a life-altering injury while serving in the Kentucky National Guard in the mid-1990s, Keith Tidball helped heal himself emotionally by returning to nature. The experience inspired his academic career working with combat veterans and disaster survivors, and documenting the therapeutic benefits of being outdoors.

Tidball, senior extension associate in the Department of Natural Resources, in the College of Agriculture and Life Sciences, served as a consultant to members of the New York State Senate on the Outdoor Rx Act, a bill that seeks to make it easier for veterans to access New York state’s scenic and restorative outdoor spaces.

The bill passed the Senate, 60-0, on Feb. 26 and now awaits the signature of New York Gov. Andrew Cuomo.

The act serves as a foundation for state agencies – such as the Department of Parks, Recreation and Historic Preservation, and the Department of Environmental Conservation – to develop and enhance policies, programs and procedures to enable members of the military and veterans to gain nature’s therapeutic benefits. Veterans are often on restricted incomes, so the bill will direct agencies to consider cost reductions for veterans to access public spaces and boat launches, while also addressing accessibility issues for those with disabilities.

Tidball, who lives in Seneca Falls, New York, and serves in the New York Guard (also known as the New York State Military Reserve), coined the term “urgent biophilia” – which refers to the idea that people in modern societies have developed a collective amnesia about the importance of being connected to nature. But after traumatic events, people recognize nature’s healthful benefits, Tidball said.

“I have collected my own data as well as physiological evidence from medical practitioners that demonstrate significant therapeutic gains” from engaging with the outdoors after traumatic events, said Tidball, who is also assistant director of Cornell Cooperative Extension.

His lab has focused on the healing and protective effects of experiencing nature through outdoor recreation as a way to prevent suicides, Tidball said. More than 900,000 veterans live in New York state, 72% of whom have served during periods of combat.

“On the order of 21 [U.S.] veterans commit suicide every single day,” he said. “And so when we’re talking about urgent biophilia, and nature as a protective factor against veteran suicide, I think we’re onto something that’s very, very important.”

Tidball’s interest in this work is rooted in personal experience. His injury more than 25 years ago led to blindness in his right eye, and forced him to abandon a career in the military. It also affected his ability engage in his favorite recreational activities and, after 9/11, sent him into a severe depression, which ultimately healed when he and his family bought a dilapidated dairy farm in Canoga, New York, on the northwest shore of Cayuga Lake.

He and his family restored the buildings, and healed the landscape, turning the land into an organic livestock farm and conservancy. He also rediscovered hunting and fishing, retraining himself to shoot and operate left-handed.

“That all created a kind of reconnection,” he said. “And I had a sense of task and purpose.” This reconnection, task, and purpose are keys to the healing properties of time spent outdoors, he said.

The Outdoor Rx legislation was sponsored by state Sen. Brian Benjamin, D-30th, and Assemblywoman Didi Barrett, D-106th. Tidball consulted on the bill and provided testimony on the facts and science of nature’s therapeutic benefits.

Tidball said he hopes the Outdoor Rx Act will continue to build a movement to empower the medical community to embrace the healing power of nature, and to write prescriptions for those who have experienced trauma to spend time outdoors, so that insurance agencies will cover such prescriptions.

Tidball has been deployed since March on state active duty with the New York Guard to assist with addressing COVID 19. “I’m seeing evidence of urgent biophilia among New Yorkers everyday,” he said.