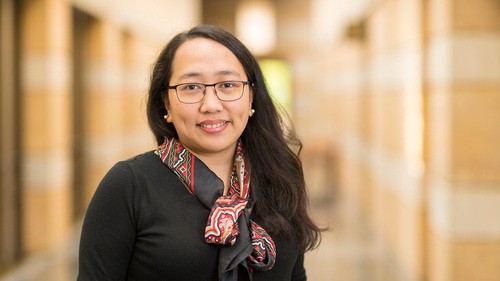 Newswise — Diane Desierto, professor of law and global affairs in the University of Notre Dame’s Keough School of Global Affairs, was named chair-rapporteur of the United Nations’ Expert Group on the Right to Development, with her official mandate starting in January.

The U.N. Human Rights Council and the U.N. Office of the High Commissioner for Human Rights chose Desierto to shepherd the finalization of the Draft Convention on the Right to Development, which she co-authored. Desierto’s scholarship is known internationally for integrating human rights implementation into global economic decision-making.

The Draft Convention provides that “every human person and all peoples have the inalienable right to development by virtue of which they are entitled to participate in, contribute to and enjoy economic, social, cultural, civil and political development that is consistent with and based on all other human rights and fundamental freedoms.”

The Draft Convention is slated to be the 10th major U.N. human rights convention and the first such human rights treaty since the 2014 passage of the Convention on the Rights of Persons with Disabilities. The Convention on the Right to Development will be voted on in 2022. Desierto, also a fellow at a number of institutes within Notre Dame’s Keough School of Global Affairs, noted that the vote need not be unanimous. After the treaty is passed by a majority of states at the U.N., only 20 ratifications from states are necessary for the treaty to enter into force.

“If this treaty passes, it will underscore that human rights, not economic gain, is the motivation and the outcome of development,” Desierto said. “This will hopefully lead to better processes that will result in human rights outcomes as the baseline for human flourishing. The new treaty will remove the siloed and narrow approach to development strategies as raw economic growth, and instead focus, in many ways, on the integral human development that we all seek at the Keough School.”

This approach, which calls for economic development that prioritizes human rights and freedoms, is at the heart of the mission of the Keough School of Global Affairs, where Desierto holds a joint faculty appointment with the Notre Dame Law School. Desierto’s U.N. appointment establishes her as a high-impact advocate for a human-centered approach to global development. However, she is quick to point out that representatives from the countries of the Global South have been diligently working toward the culmination of this treaty since the right to development was declared in 1986.

The U.S. and many EU states are not active in the process, but are engaged and could ultimately sign the treaty. To Desierto, this is “quite ironic, considering many U.S. and EU-led sanctions are triggered by human rights violations in other countries.”

Considering Desierto’s body of work, Marilyn Keough Dean of the Keough School of Global Affairs Scott Appleby said that the leadership at the Keough School was not surprised by this announcement. “We are proud of Professor Desierto’s tireless work in the cause of human rights, which is now being rewarded so significantly through this appointment.”

In the coming months, Desierto and several of her students will be logging and assessing comments and queries on the Draft Convention from all participating states at the U.N. “The students who partake in this project will get a direct view from the bottom up of how a treaty is made, concluded and how it enters into force at the international system,” Desierto said.

Founded in 2014, the Keough School addresses pressing global challenges through research, policy and practice, with special emphasis on developing effective and ethical responses to poverty, war, disease, political oppression, environmental degradation and other threats to human flourishing. Established in 1869, Notre Dame Law School is the oldest Catholic law school in the U.S. The Law School’s approach to legal education is informed and inspired by faith. Students are trained to view the law as a vocation in service to others, to explore the moral and ethical dimensions of the law, and to discover their unique roles in furthering the cause of justice.