Exclusive Research: Where the Youth Vote Could Matter Most in 2018 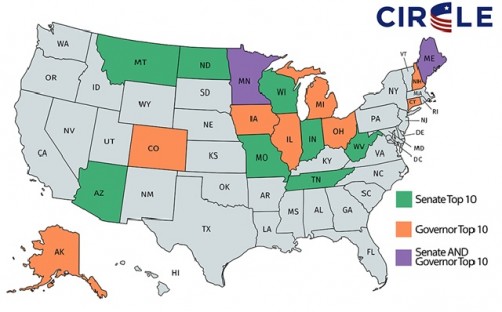 Map showing the top states where youth voters will have the most influence.

Newswise — MEDFORD/SOMERVILLE, Mass. (March 27, 2018)–How will young people shape the future American political landscape? A new index offers a potential answer by ranking the top districts and states where young people could have a significant influence on the outcome of congressional and gubernatorial races across the country. The 2018 Youth Electoral Significance Index (YESI) was developed exclusively by the Center for Information and Research on Civic Learning & Engagement (CIRCLE) – the preeminent, non-partisan research center on youth engagement at Tufts University’s Jonathan M. Tisch College of Civic Life.

While young people can influence elections in many ways, the 2018 index highlights the areas where young people (ages 18-29) are poised to have a disproportionately high impact on election outcomes this year. The index takes into account the competitiveness of the electoral contests, as well as demographic characteristics, the number of colleges and universities, historical youth turnout data and voting laws.

Kei Kawashima-Ginsberg, director of CIRCLE, emphasizes that realizing this potential electoral power partially depends on efforts to engage and listen to young voters.

“Young people can shape our elections, our policies and the future direction of states and the nation, but their potential is limited when campaigns don’t reach out to them and when officials don’t seek and value their views,” she said. “We hope this tool will encourage campaigns, media outlets and advocates across the country to engage young people on issues that matter to them.”

Throughout the 2018 election cycle, CIRCLE youth vote experts are available for interviews and/or analysis. CIRCLE is co-leading 22x20, a ground-breaking national initiative to bring multiple fields together to build civic opportunities for the 22 million teens who will be 18 before the 2020 election. Media outlets should contact: Jen McAndrew at [email protected]or 617 627-2029.

CIRCLE (www.civicyouth.org) is a nonpartisan, independent, academic research center that studies young people in politics and presents detailed data on young voters in all 50 states. CIRCLE is part of the Jonathan M. Tisch College of Civic Life (http://tischcollege.tufts.edu/), the only university-wide college of its kind. The college offers transformational student learning and service opportunities, conducts groundbreaking research on young people’s civic and political participation, and forges innovative community partnerships. Its work is guided by two core beliefs: that communities, nations and the world are stronger, more prosperous, and more just when citizens actively participate in civic and democratic life; and that higher education has a responsibility to develop the next generation of active citizens.