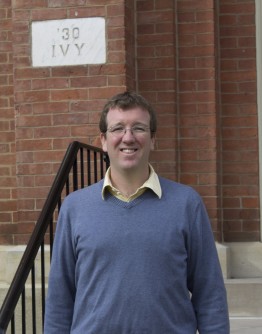 Despite being his political opposition, Republicans have more incentives than ever to work with President Barack Obama, according to Patrick Hickey, assistant professor of political science at West Virginia University.

With Republicans controlling both houses after the November midterms, Congress should be able to pass some bills to send to the president. Should he veto them, they could work with him to get legislation passed through.

That, of course, is the optimistic turn of events.

Hickey, whose focus of study is how presidents work with Congress, is co-authoring a chapter for the Miller Center of Public Affair’s forthcoming book “42: Inside the Presidency of Bill Clinton” to be published by Cornell University Press. The Miller Center for Public Affairs at the University of Virginia is a nonpartisan institute that seeks to expand understanding of the presidency, policy, and political history, providing critical insights for the nation’s governance challenges.

The chapter, co-authored with Sean M. Theriault and Megan Moeller of the University of Texas at Austin, will focus on President Clinton’s relationship with Congress during his eight years in office.

Oral histories with some of the Clinton administration’s top members have provided an insight into how the enigmatic president was initially able to work with Republican members of Congress, as well as his own, in passing legislation.

The chapter reveals the similarities between the second terms of Obama and Clinton. After a successful first term with Congress, Hickey said much of the current political polarization in Washington today can be attributed to the climate to the Republican majority of the 1990s.

Clinton wasn’t as successful working with Republicans in his second term, the chapter reveals. Statistical analysis has shown that the idea that Clinton successfully reached across the aisle isn’t as true as many make it out to be.

“By all accounts, everyone in the Clinton White House said ‘We had a much more organized, effective operation in our second term than we did in the first,’” Hickey said.

The numbers, however, tell a different story.

“Clinton was less successful in his second term than the first and that was because lots of really extreme Republicans had moved into the Senate and they just wouldn’t work with the president at all.”

That same echo of non-cooperation has been heard lately, with people wondering what Obama has done differently than his Democratic predecessor.

“Everyone kind of had this ‘Clinton was able to work with Republicans and Obama’s not, what’s wrong with Obama?’” Hickey said. “It was nothing to do with Obama, it was that Republicans didn’t feel they were going to be held accountable because they didn’t control both houses of Congress.”

The chapter looks at how, before partisan gridlock took effect, Clinton was able reach across party lines.

“One thing that comes out is that President Clinton wasn’t the best at working with Congress in his first few months in office, but he figures it out really quickly and everyone involved —Republicans, Democrats, staffers— say he’s this kind of incredibly talented politician who really learns how to work with Congress,” Hickey said.

Clinton’s knowledge of Republican districts would help enforce his arguments to representatives. By arguing how it would benefit their voters, it became easier to persuade them to vote with him.