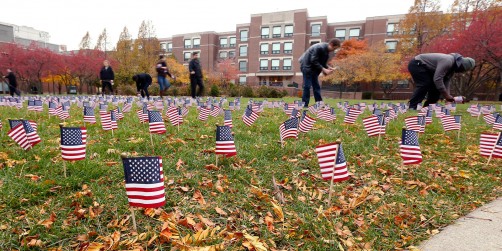 DePaul University faculty are available to discuss the 20th anniversary of the 9/11 attacks, offering expertise in foreign relations, diplomacy, history and more.

CHICAGO — As the United States approaches the 20th anniversary of the terrorist attacks in 2001, DePaul University faculty and experts are available to give commentary and insight. Their expertise is wide-ranging, including foreign relations, diplomacy, history and religion.

Mockaitis is a nationally renowned expert on terrorism and the wars in Afghanistan and Iraq. “To a significant degree, however, failure was baked into the U.S. mission from the beginning and made more likely by decisions taken in succeeding years,” Mockaitis wrote recently about the War in Afghanistan for The Hill.

Hibbard is working on a book that provides a retrospective look at U.S. foreign policy toward Islamic militancy from the Cold War to the present.

Ehsani’s research focuses on the historical and contemporary impact of oil on society and politics, and the historical sociology of warfare. He recently commented on the water crisis in Iran on KPFA-FM in Berkeley, California.

Andolina studies U.S. government, campaigns and public opinion, with a focus on youth engagement and political socialization. “For older Millennials, 9/11 was the first political event they can remember,” says Andolina. “For younger members of this generation, as well as the generation that followed them (Gen Z), 9/11 is a historic event they learned about in school.”

Carter’s work examines family factors related to physical health and mental health in urban youth and their families, as well as stress and trauma.

Wellman’s work focuses on the relationship between diplomacy and religion, ecological sustainability and interreligious engagement. He recently discussed how everyone can act as a diplomat and build bridges across differences in a talk for TedXDePaulUniversity.

Wiseman’s research focuses on diplomatic theory and practice. He brings diplomatic experience in Stockholm, Hanoi and Brussels, and has worked on nuclear disarmament and nonproliferation.