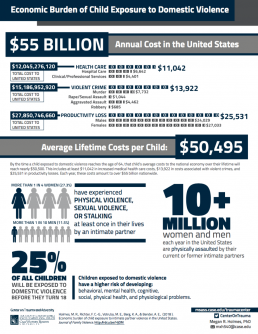 Newswise — CLEVELAND—The federal government spends an estimated $55 billion annually on dealing with the effects of childhood exposure to domestic violence, according to new research by social scientists at Case Western Reserve University.

The results of a study on the national economic impact of exposure to domestic violence—published in The Journal of Family Violence—showed higher health-care costs, higher crime rates and lower productivity in children as they aged.

“This is a significant public-health problem that not only means long-term consequences for these children, but also imposes a substantial financial burden to society,” said Megan R. Holmes, assistant professor and founding director of the Center on Trauma and Adversity at the Jack, Joseph and Morton Mandel School of Applied Social Sciences.

In the United States, an estimated 15.5 million children each year are exposed to at least one episode of intimate partner violence, with more than 25 percent of children exposed to domestic violence in their lifetime.

The CDC’s National Intimate Partner and Sexual Violence Survey reports that 27.3 percent of women and more than one in 10 men (11.5 percent) have experienced physical violence, sexual violence or stalking by intimate partners at least once in their lives.

Married or cohabiting couples who have children are reported to experience the highest likelihood of domestic violence.

By the time a child exposed to domestic violence reaches age 64, the average cost to the national economy over their lifetime will reach nearly $50,000 across the following main categories, according to the research.

“And that’s just for one person,” Holmes said. “If we consider Ohio’s young adults, for example, the 172,500 Ohioans who are 20 years old, the cumulative lifetime cost for the estimated 25 percent who were exposed to domestic violence as children will be nearly $2.18 billion. Applied to the entire nation, the economic burden becomes substantial—over $55 billion.”

She said the effects of children’s exposure to domestic violence carry long-lasting consequences—and society picks up the tab.

While much research has been conducted on the effect of domestic violence exposure on short- and long-term outcomes, this is the first study to add a price tag to this public health problem.

“Although we researchers often use words like ‘ground-breaking’ to describe our work, few studies really meet that bar,” said Rebecca J. Macy, editor-in-chief of The Journal of Family Violence and associate dean for academic affairs in the University of North Carolina School of Social Work.

“With their study on the economic burden of children’s exposure to partner violence however, Prof. Holmes and her colleagues have really produced a groundbreaking study.”

By understanding the extent of the costs incurred, policymakers can now reference the economics to push for more effective preventive and therapeutic interventions, Holmes added.

The study was done in coordination with Francisca García-Cobián Richter, research assistant professor; Kristen Berg and Anna Bender, both doctoral candidates, at the Mandel School; and Mark Votruba, associate professor of economics, at the Weatherhead School of Management. 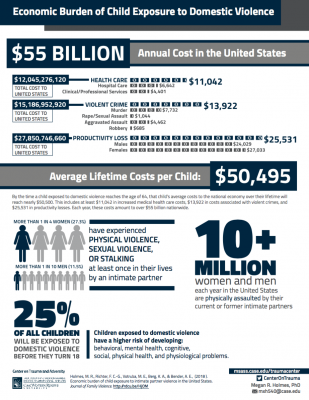