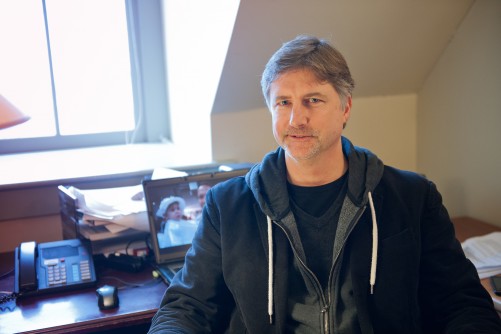 Jack Gierzynski, political science professor at the University of Vermont, plans to include the findings of his latest study showing that fictional movie characters shape the leadership traits Americans value most in a follow-up book to his popular book about the influence of the Harry Potter series on Millenials' overwhelming support for Barack Obama in 2008.

Newswise — Could watching fictional characters like Katniss from The Hunger Games or the Doctor in the Doctor Who series influence the way Americans view leadership and consequently affect the outcome of the upcoming presidential election?

According to a new study designed to test the effects that fictional portrayals of leadership have on the leadership traits Americans value most, the answer is yes. The study, which had participants watch video clips of fictional leaders, found that gender-related traits stereotypically viewed as either masculine or feminine can be influenced just as much by fictional models of leadership as real world ones.

“This finding that fictional portrayals of leaders can shape the type of traits we value in leaders demonstrates one of the subtle ways that entertainment can influence our politics, and one that is especially relevant for the 2016 Election,” says Jack Gierzynski, a political science professor at the University of Vermont who intends to include a chapter on the study in a follow-up to his popular book about the influence of the Harry Potter series on Millenials' overwhelming support for Barack Obama in 2008. "It is through leadership qualities valued by the public that gender and associated biases will play out and ultimately influence the vote choice in November."

Prior research has shown that Americans value stereotypically male leadership traits like self-confidence and decisiveness over stereotypically female ones such as compassion and empathy. Gierzynski says this has forced women leaders like Hillary Clinton to exhibit more masculine leadership traits in order to get elected. The problem with that, he says, is that most people don't like it when women violate gender norms, putting Clinton in what he calls a “double bind.

Results from Gierzynksi's study "Fictional Leaders, Leadership Stereotypes and Evaluations of Women in Leadership Positions" are promising for women in leadership positions because they show that perceptions of important leadership traits are malleable, especially when shown to be effective and positive regardless of the gender of the character portraying them.

“Since most Americans value stereotypical male traits more than stereotypical female traits in executive leadership posts, women who vie for those posts must exhibit those traits,” says Gierzynski, who presented his initial findings at the 74th annual Midwest Political Science Association Conference in Chicago with students who helped conduct the study. “When female candidates do that they violate our subconscious normative expectations of how women are supposed to act and we end up not trusting them (a major problem for Clinton).”

Overall, the highest scores on leadership were given by study participants who watched clips in which stereotypical female leadership traits were shown to be effective and positive by both female and male characters like the Doctor in Doctor Who. “It is interesting to note that the significant effect occurred in the experimental condition involving a man (the Doctor) effectively using traits typically associated with women,” writes Gierzynski. “It may be that we are more open to learning about the value of traits associated with women only when they are shown to be effective by a man.”

The scenes for the study were chosen, in part, because of their realistic portrayals of leadership. This is especially important given that Gierzynski's study was grounded in narrative transportation theory, which posits that when people become involved or transported into a compelling story their attitudes and intentions change to reflect that story. In this particular case, the fictional narratives of popular entertainment figures had to seem real enough to have an effect on politically relevant predispositions.

“Why should we expect fictional stories to affect real world conceptions of leadership and the value placed on stereotypically female traits?” ask Gierzynski. “One reason is the psychological processes that result in learning from a fictional narrative. When we follow a story – whether in print, on TV, in a video game, a streamed video or a movie theater – we become immersed in the story in ways that take us away from our physical environment and mental state. That concept proved true in our experiment."