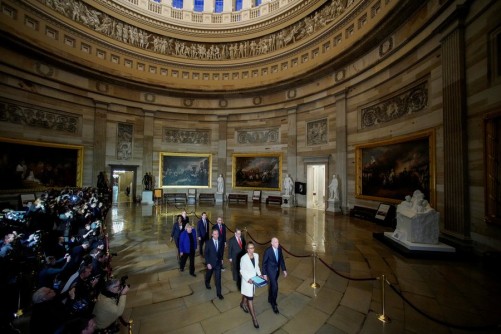 The House Sergeant and House Clerk carry the articles of impeachment during a procession with the seven House impeachment managers on January 15.

Newswise — The impeachment trial of President Donald Trump began today as the House trial managers read the articles of impeachment on the Senate floor and Chief Justice John Roberts swore in ninety-nine U.S. senators. (Senator James Inhofe was back home in Oklahoma attending to a family emergency; he will be sworn in next Tuesday.) Each senator pledged to “do impartial justice according the Constitution and the laws.” The Senate then sent a writ of summons to the White House formally notifying the president that he will be tried for abuse of office and obstruction of justice, and inviting him to mount a defense. He has until Saturday evening to respond.

The impeachment trial will likely dominate the news for the rest of the month, if not longer. In doing so, it could potentially affect the conduct of U.S. foreign policy and the rhythms of the Democratic presidential campaign. So here are answers to five questions you might have.

The Senate reconvenes on Tuesday because Monday, Martin Luther King Day, is a federal holiday. One of the first actions will be to vote on a resolution that Senate Majority Leader Mitch McConnell will introduce outlining the rules for the trial. Democrats will try to amend the resolution to guarantee that witnesses will be called and new evidence can be introduced. McConnell looks to have the votes needed to prevail.

Once the trial is underway, it will run on a Monday-through-Saturday basis until it ends. The Senate is reserving its mornings for other business, so the trial will resume at 1:00 p.m. each day the Senate is in session and likely run until 6:00 p.m.

The trial won’t look like any Senate session you might catch on C-SPAN. First off, all one hundred senators are required to attend. They must sit at their desks. They cannot talk, even to ask questions, “upon pain of imprisonment.” They are only allowed to read impeachment-related materials. And perhaps most distressing for senators, they won’t be allowed to use electronic devices. So no live tweeting or catching up on email.

A majority of the Senate can vote to dismiss the case at any time. Republicans don’t currently have the votes to do so.

How will the trial proceed?

Chief Justice Roberts will preside over the trial. He will likely have little to do. Chief Justice William Rehnquist borrowed a line from a Gilbert and Sullivan operetta to describe his experience presiding over Bill Clinton’s impeachment trial: “I did nothing in particular, and I did it very well.” Roberts, who clerked for Rehnquist in the early 1980s, could be asked to rule on whether the trial rules are being properly followed. His decisions, however, aren’t binding. The Senate can overrule him by majority vote.

Seven House managers will present the case for Trump’s removal from office in opening arguments. Those managers are: Adam Schiff and Zoe Lofgren of California, Jerrold Nadler and Hakeem Jeffries of New York, Jason Crow of Colorado, Val Demings of Florida, and Sylvia Garcia of Texas. Demings is the only non-lawyer in the group; however, she did serve as police chief of the Orlando Police Department. All the House managers are Democrats, just as all the House managers in the Clinton impeachment trial were Republicans. The current group of House managers, however, is smaller and more diverse in terms of gender and race. The House Republican majority had thirteen white men make the case against Clinton in 1999.

After the House managers present their case against the president, the president’s legal team will present his defense. The White House has yet to name its defense team.

Each side will likely take several days to make their opening arguments. Senators will be allowed to question both sides. However, they must submit their questions in writing. The House managers and the president’s defense lawyers can respond orally.

One thing to keep in mind while watching the trial on television—Senate employees will be operating the cameras. That is standard practice. None of the networks or cable news channels have a say in where the cameras are pointed. C-SPAN’s president has asked McConnell to allow its cameras to cover the trial, a request that broadcast and cable news networks have endorsed. They are unlikely to get their way.

Will witnesses be called?

This is a big question, with a lot potentially riding on the outcome. The Republican majority has chosen to postpone any decision about calling witnesses until after the opening arguments conclude. That is how the Republican-controlled Senate proceeded in the Clinton impeachment trial.

McConnell and most of his Republican colleagues oppose calling witnesses. The White House endorses that position, having decided that a quick trial is in the president’s best interests. Democrats say they would like to hear from four witnesses in particular: former National Security Adviser John Bolton, acting White House Chief of Staff Mick Mulvaney, and White House officials Michael Duffey and Robert Blair. Fifty-one votes are required subpoena a witness, so Democrats need four Republicans to break ranks to carry the day.

If the Senate votes to call witnesses, they may not testify in open session as witnesses did in the House impeachment hearings. Instead, witnesses could be deposed in private. Video excerpts would then be played on the floor of the Senate. This is how the Senate handled witnesses during the Clinton impeachment trial.

Calling witnesses means a longer trial. For comparison’s sake, Clinton’s impeachment trial lasted thirty-three days. Trump is currently scheduled to give his State of the Union address on February 4, which is just nineteen days away. Having a president address both houses of Congress in the midst of an impeachment trial may sound unthinkable. But Clinton did just that.

Once witness testimony is completed, or immediately after the opening arguments if no witnesses are called, the House managers and presidential defense team will provide closing arguments. The Senate will then deliberate, likely in closed session. A two-thirds vote on either of the two counts against Trump will lead to his removal from office.

How will the trial affect the conduct of U.S. foreign policy?

It’s hard to say. Overseas threats don’t take a holiday while the Senate discharges its constitutional duties. However, given that Trump is widely expected to be acquitted, potential adversaries aren’t likely to see an opportunity to exploit a fatally weakened president.

That said, the impeachment trial will soak up the White House’s time and energy as well as that of most of official Washington. So the next few weeks don’t look to be a great time to launch major new foreign policy initiatives. And it’s inevitable that any significant foreign policy move will spark talk about presidential motives, as the surge in wag-the-dog commentary following the Soleimani killing earlier this month attests. Politics won’t be stopping at the water’s edge anytime soon.

What does the trial mean for the Democratic presidential primary campaign?

That’s a question that Democratic and Republican operatives are all asking given that the Iowa caucuses are just eighteen days away and the New Hampshire primary a week after that. The trial certainly creates a practical problem for Senators Michael Bennet, Amy Klobuchar, Bernie Sanders, and Elizabeth Warren. They will all be in Washington, DC, while their rivals are crisscrossing Iowa or dropping into New Hampshire. The longer the trial lasts, the bigger that problem potentially becomes.

Because nothing like this has happened before, no one knows who will be helped or hurt. The good news for the four senators is that ordinary campaign operations—things such as running ads, manning telephone banks, and knocking on doors—should continue as usual. And the satellite uplink will be the senators’ friend when the trial is in recess. The downside is that the residents of Iowa and New Hampshire have a reputation for liking retail politics, which looks to be off the table in the immediate future for Bennet, Klobuchar, Sanders, and Warren. But their loss will be a gain for political scientists looking to understand what moves the needle in primary campaigns.

Anna Shortridge assisted in the preparation of this post.