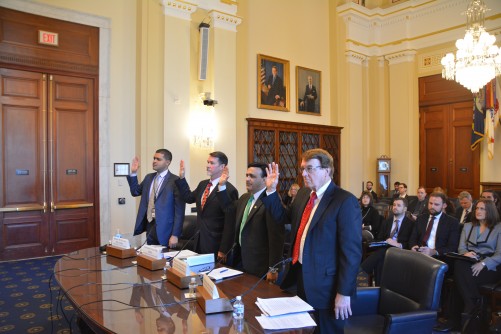 Newswise — Washington, D.C. (December 1, 2017) –On Wednesday, the Federation of State Medical Boards (FSMB) testified before the House Committee on Veterans Affairs Subcommittee on Oversight and Investigations, on the issue of “Examining VA’s Failure to Address Provider Quality and Safety Concerns.” Members of the committee called for the hearing after a new Government Accountability Office (GAO) report found that in an audit of five VA medical facilities, eight of nine providers who had adverse privileging actions were never reported to the NPDB or state medical boards.

“Providers who are unqualified or unsafe to practice medicine in the VA should not be allowed to practice outside of, or elsewhere in, the VA, nor should such providers be able to conceal their disciplinary actions with secret settlement arrangements,” said Humayun Chaudhry, DO, MACP, President and CEO of

the FSMB. “Proper notification of provider disciplinary proceedings within the VA to the appropriate state medical board and the NPDB will help ensure that unsafe and dangerous physicians are identified and prevented from also treating patients outside the VA.”

In his testimony, Dr. Chaudhry shared that through consultation with several state medical boards, FSMB confirmed that the VA does not always alert state boards in a timely fashion about violations, disciplinary actions, or suspected violations of a state’s Medical Practice Act. He stressed that the primary mission of every state medical board is public protection, and it is imperative that boards are provided with disciplinary information so that they can carry out their critically important work.

Dr. Phil Roe (R-TN), Chairman of the House Committee on Veterans Affairs, echoed Dr. Chaudhry’s concern, “One of the reasons we have such confidence in our medical system is because of our board system that allows us to make sure that patients understand when they come in that they are going to get the highest quality of care. And with no information, you’re absolutely right you [state medical boards] can’t do your job.”

In response to the GAO report and testifying before the committee, the VA states it is currently rewriting and updating its policies and taking three major steps to improve clinical competency and reporting:

To watch Dr. Chaudhry’s opening statements to the committee, click here. The FSMB’s full written testimony and other hearing documents can be viewed by clicking here.

About the Federation of State Medical Boards

The Federation of State Medical Boards (FSMB) is a national non-profit organization representing all medical boards within the United States and its territories that license and discipline allopathic and osteopathic physicians and, in some jurisdictions, other health care professionals. The FSMB serves as the voice for state medical boards, supporting them through education, assessment, research and advocacy while providing services and initiatives that promote patient safety, quality health care and regulatory best practices. To learn more about FSMB, visit www.fsmb.org. You can also follow FSMB on Twitter (@theFSMB).