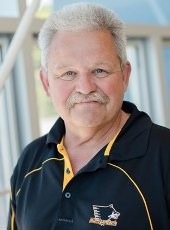 Guy Meadows, director of the Great Lakes Research Center at Michigan Technological University on the shores of Lake Superior, has been active in the federally funded Great Lakes Restoration Initiative (GLRI) since its inception.

President Trump’s budget proposal released earlier this month would eliminate Great Lakes restoration programs. Today, 63 Republicans and Democrats in the US House of Representatives sent a letter to the House Appropriations Committee, asking that Great Lakes Restoration Initiative funding be restored to $300 million in fiscal year 2018. The Trump Administration’s budget proposed elimination of the Great Lakes Restoration Initiative, from $300 million annually to zero.

Guy Meadows is an articulate and knowledgeable spokesperson on the importance of the GLRI. His research interests include geophysical fluid dynamics with emphasis on environmental forecasting and full-scale, Great Lakes and coastal ocean experimental hydrodynamics. In this arena, he has influenced policy and explored societal impacts of environmental forecasting for coastal management, recreational health and safety, and regional climate change.

He has also contribued to five nationally televised documentaries for the History and Discovery Channels.