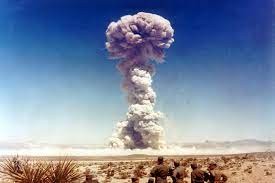 WASHINGTON (Oct. 7, 2022)— On Thursday night President Joe Biden, speaking at a fundraiser in New York City, remarked that the risk of nuclear attacks is graver than anything since the 1962 Cuban Missile Crisis. “We have not faced the prospect of Armageddon since Kennedy and the Cuban Missile Crisis,” Biden told the crowd. The president’s remarks are a response to the increasing threats from Russian President Vladimir Putin, who last week escalated his war against Ukraine by illegally annexing four Ukrainian regions, and raised the specter of using nuclear weapons, ominously noting that the United States had set a precedent when it dropped atomic bombs on Hiroshima and Nagasaki in 1945.

Sharon Squassoni is a research professor at the Institute for International Science and Technology Policy of the Elliott School of International Affairs. She has specialized in nuclear nonproliferation, nuclear energy, nuclear weapons, and nuclear arms control and security policy for three decades, serving in the U.S. government at the Arms Control and Disarmament Agency, the State Department, and the Congressional Research Service. She recently spoke to KCBS-AM about Biden’s remarks offering this analysis:

“Obviously [President Biden] said this at a campaign event, I don’t think he would be using this to particularly to signal to President Putin our intentions. Probably more relevant last week [National Security Advisor] Jake Sullivan had said we don’t see signs of Putin moving to use nuclear weapons. Now the question is, has something happened between last week and this week to have caused President Biden to up the threat level?”

She is available to discuss to discuss President Biden’s remarks about the possibility of nuclear weapons being deployed.