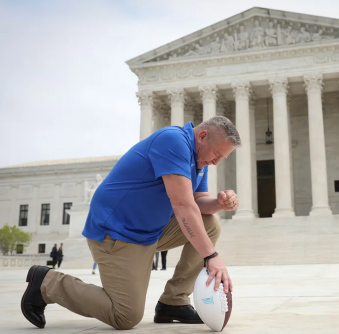 WASHINGTON (June 27, 2022)—Today the Supreme Court issued its opinion in Kennedy v. Bremerton School District, also known as the “praying coach” case. Joseph Kennedy is a former football coach for the Bremerton School District who repeatedly led his team to pray on the school’s football field. The coach has argued that the school violated his First Amendment rights to speech while the school says as a public employee the coach’s actions violate the Establishment Clause. In a 6-3 opinion the Court ruled in favor of the plaintiff's right to pray on school grounds.

Robert Tuttle is the David R. and Sherry Kirschner Berz Research Professor of Law and Religion at the George Washington University Law School. He also worked on an amicus brief in support of the school district’s position.

“There’s been this perception that religion in America is under attack by forces of secularism. Schools are not supposed to be in the religion business. Religious education belongs to families and their religious communities. It does not belong to public schools.

This case really presses this line between the sacred and the secular and whether it's possible to maintain an idea of secularity of government in the face of those who claim that any assertion of secularity is really a promotion of secularism.”

Ira C. Lupu is professor Emeritus of Law and a nationally recognized scholar in constitutional law, with an emphasis in his writings on the religion clauses of the First Amendment. Together with his colleague Professor Robert Tuttle, Professor Lupu is the co-author of Secular Government, Religious People.