The No. 2 cause of death hasn’t changed much in 17 years, while prevention efforts cut the death rate from No. 1 cause – motor vehicle accidents -- in half 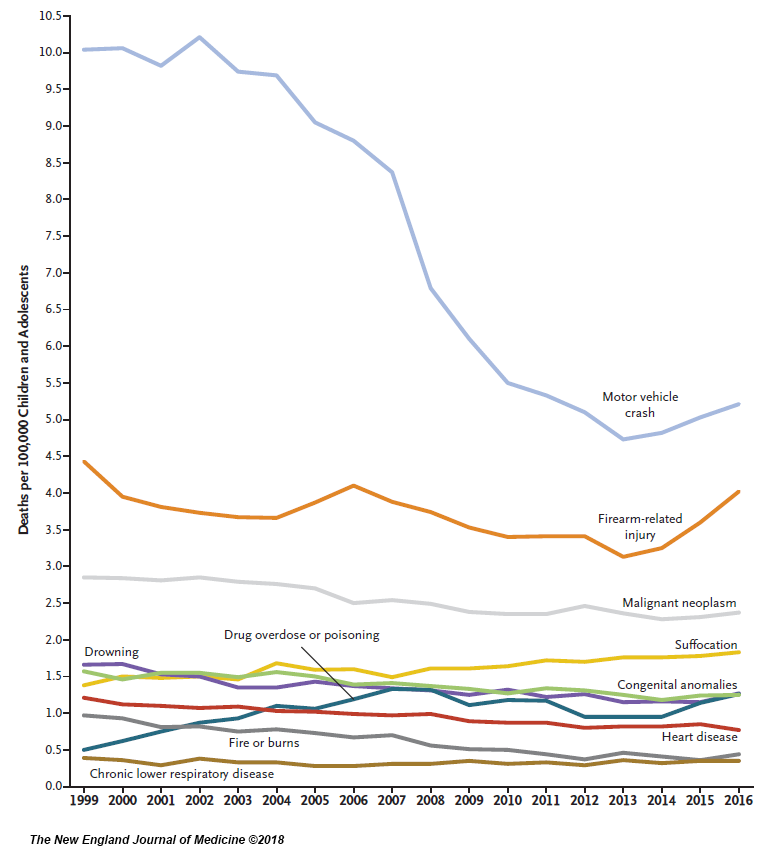 One-year totals and ten-year trend arrows for the top four causes of death among U.S. children and teens ages 1 to 19. Based on CDC WONDER data.

Dr. Rebecca Cunningham of the University of Michigan discusses key findings of a new study about causes of death for U.S. children and teens ages 1 through 19.

Newswise — ANN ARBOR, MI – America lost 20,360 children and teens in 2016 -- 60 percent of them to preventable injuries, a new study shows. More than 4,000 of them died in motor vehicle crashes, though prevention efforts and better trauma care have cut the death rate of young people from such crashes in half in less than two decades.

Meanwhile, firearms -- the number two cause of death in youth – claimed the lives of more than 3,140 children and teens in 2016, according to the new findings from a University of Michigan team

That’s about eight children a day, according to their special report in the New England Journal of Medicine.

Unlike vehicle crashes, the rate of firearm-related death for those aged 1 to 19 years has stayed around the same for nearly the past two decades, the new analysis shows. That rate is more than 36 times as high as the average rate across 12 other high-income countries.

The new study, by members of the U-M Injury Prevention Center, was done using publicly available data from the U.S. Centers for Disease Control and Prevention’s WONDER database of information from death certificates.

It’s the first time all causes of child and adolescent death have been tallied by both mechanism and intent, and that rates of these causes of death over time have been calculated for all the top causes.

Cancer, which accounted for 1,853 deaths of those age 1 to 19, comes in third place, and its death rate has dropped since the start of the study period. Suffocation – mainly suicides by hanging and other means – was fourth, and is on the rise.

Those causes are followed by drowning, drug overdoses/poisonings and birth defects, each with just under 1,000 deaths and steady decreases in death rates over the last 17 years for both drowning and birth defects.

“Firearm deaths of children and adolescents are an ‘everybody’ problem, not a problem for just certain population,” says Cunningham, a professor in the U-M Department of Emergency Medicine. “Homicides account for 60 percent of those deaths, suicide about 35 percent, unintentional or accidental injuries about one percent and mass shootings slightly less than one percent.”

She adds, “By using a data-driven approach to studying these deaths, I hope we can guide the U.S. to apply our resources to help us understand what we can do to prevent these deaths across the country.”

Ever since 1999, the researchers show, about 4 of every 100,000 American children and adolescents have died by a gun-related homicide, suicide or unintended shooting each year.

Firearm deaths affect all areas of America, the study shows. Urban adolescents are twice as likely to die in homicides as rural youth, while rural teens have a rate of suicides that’s twice as high as the rate for urban youth. Suburban teens who die of firearm-related causes do so of suicide and homicide at roughly equal rates.

For children between the ages of 1 and 9 years, unintentional injuries were the leading cause of firearm death.

Other causes, and a call for action

Co-author Maureen Walton, MPH, Ph.D., associate director of the Injury Prevention Center and professor in the U-M Department of Psychiatry, notes that drug poisoning and overdose have risen to be the sixth leading cause of death for young people.

This is largely due to increases in opioid overdoses, which the study shows account for over half of drug overdoses among adolescents, says Walton, who is the associate director of child research at the U-M Addiction Center.

Motor vehicle crashes kill nearly three times as many children and teens per 100,000 in rural areas, compared with in urban and near-urban areas – even when the researchers adjusted the data to account for the extra miles traveled each year by drivers in rural areas.

“Our country has spent billions to decrease car crash injuries and deaths for kids and adults, and has made it a leading priority for several federal agencies. Safety in a crash is now a selling point for cars,” says Cunningham. This implementation of ‘prevention science’ has resulted in the steady decrease in motor vehicle crash deaths for children and teens over the past 20 years.

“At the same time, we have dozens of teams of scientists and clinicians working on prevention and treatment of pediatric cancers, congenital conditions and heart diseases,” conditions where death rates have also fallen,” she adds. “We hope these data help put firearm deaths of young people in the proper context, so we can study and test potential preventive measures while respecting the Second Amendment rights of gun owners.”

Some of the efforts to reduce firearm deaths among children and teens could be led by physicians, she adds. She recalls learning about the early warning signs and diagnostic steps for childhood cancers such as leukemia, and for other serious childhood ailments, during her residency training. But today’s medical students and residents get little or no training about how to ask parents if guns are present, and stored safely and securely, in their homes.

“Firearm risk to children and adolescents, whether from unintentional or intentional use of a gun, is a serious medical issue that all of us in the profession can help address,” he says. “The results from this study certainly have inspired me as a physician to know that we need to be doing better. We hope that these findings will also encourage other physicians to know that this is indeed their ‘lane’ to be working in, to be preventing firearm related injury and death.”

Cunningham and Carter co-lead, and Walton is a member of, the Firearm Safety Among Children and Teens Consortium, abbreviated FACTS. Together with co-leader Marc Zimmerman, Ph.D. of the U-M School of Public Health and researchers from around the country, FACTS is collecting and sharing research data on firearm-related topics in young people, while respecting gun ownership as an important part of the cultural fabric of the U.S.

All three authors are also members of the U-M Institute for Healthcare Policy and Innovation.