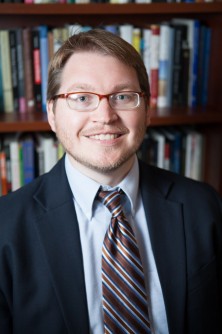 Timothy Shaffer, assistant director of the Kansas State University Institute for Civic Discourse and Democracy and assistant professor of communication studies, is leading a research project on civility in the presidential and vice presidential debates. The institute is calling for civility and respect in the upcoming debates.

Talking about politics can be difficult and even stressful if the conversation takes a turn for the worse. Learn how to communicate about politics in a way that promotes civility and understanding. With Donna Schenck Hamlin of the Institute for Civic Discourse and Democracy. www.k-state.edu/icdd/

Newswise — MANHATTAN, KANSAS — Through research and a national partnership, Kansas State University's Institute for Civic Discourse and Democracy is calling for civility and respect in Monday's presidential debates and the upcoming debates in October.

The institute is collaborating with the National Institute for Civil Discourse in urging presidential debate moderators, candidates and audiences to commit to more civil debates. The university's institute has joined with more than 70 civic and university-based organizations to sign the National Institute for Civil Discourse's Debate Standards to ensure that the debates are fair, informative and civil. The standards ask debaters, moderators and audience members to be respectful and responsible.

The presidential debates are scheduled for Monday, Sept. 26, at Hofstra University in Hempstead, New York; Sunday, Oct. 9, at Washington University in St. Louis; and Wednesday, Oct. 19, at the University of Nevada in Las Vegas.

"K-State's Institute for Civic Discourse and Democracy is committed to the idea that public discourse can and should be civil and productive," said Timothy Shaffer, assistant director of the institute and assistant professor of communication studies. "The 2016 election cycle has highlighted the increased sense of fracturing in society."

“Democratic society is built on people working with one another and engaging across lines of difference," said David Procter, director of the institute and professor of communication studies.

Shaffer and Robert Boatright, research director for the National Institute for Civil Discourse, also are leading a research project on civility in the presidential and vice presidential debates. This research project explores how people perceive civil or uncivil discourse in the debates and includes participants across the U.S. Kansas State University students will offer their take on how candidates and moderators uphold the National Institute for Civil Discourse's Debate Standards. Shaffer and Boatright want to better understand what influence such standards have on candidates, moderators and audience members.

"Robust and vigorous disagreement is at the heart of democracy," Shaffer said. "What we’re calling for is a more civil approach to engaging with those who have different views — but we are all still part of our campuses, communities, states and country. The presidential and vice presidential debates offer an opportunity to reset this current state of uncivil discourse that seems so widespread right now in the U.S."

The university's Institute for Civic Discourse and Democracy was formed as an interdisciplinary, non-partisan organization in 2004 in response to polarizing political discourse and increasingly complex public issues that challenge democratic decision-making. The institute engages in research, education and facilitation of civic conversations to promote greater citizen participation in deliberation and public dialogue. It connects faculty and students from all academic disciplines with community affiliates to address prominent issues using processes to improve qualities of civic discourse: specifically, inclusiveness, equality, reciprocity, reflection, reason-giving and shared decision-making.

"After the constant vitriol and caustic rhetoric this campaign has wreaked on America’s political landscape, the debates represent our last best chance for a civil reset, for Americans to come together and hear the candidates’ cases," said Carolyn J. Lukensmeyer, executive director of the National Institute for Civil Discourse. "We urge the moderators to adopt the National Institute for Civil Discourse’s Debate Standards and therefore ensure a civil debate, where both sides are heard and respected and treated equally."

The National Institute for Civil Discourse is a non-profit, non-partisan institute based at the University of Arizona dedicated to addressing incivility and political dysfunction in American democracy by promoting structural and behavioral change. Informed by research, the institute's programs are designed to create opportunities for elected officials, the media and the public to engage different voices respectfully and take responsibility for the quality of our public discourse and effectiveness of our democratic institutions. The institute was formed after the tragic shooting of former Rep. Gabby Giffords in Tucson. Its National Advisory Board includes former President George H.W. Bush and former Supreme Court Justice Sandra Day O’Connor.