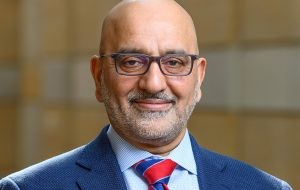 Fighting for Religious Freedom. Professor of Islamic Studies Ebrahim Moosa's Madrasa Discourses project brings together madrasa graduates who yearn to fill the gap between traditional teachings and the modern world.

“The extraordinary Senate resolution condemning Saudi Arabia’s war in Yemen and Crown Prince, MBS, signals a new sentiment on Capitol Hill, but it is far from a new US policy for the Middle East. Saudi condemnation of the resolution signals Riyadh’s confidence that it has the ear of the President in the White House and that it can steamroll human rights concerns with its shopping list of US arms purchases and using Iran as a scarecrow to feather its own nest with the West. Furthermore, the Saudis have enlisted Israeli Prime Minister Benjamin Netanyahu who enjoys warm relations with the Trump White House in its campaign to bulldoze global public opinion about its treatment of critics and the shameful execution of dissident journalist Jamal Khashoggi. And the Saudis have also geopolitically blackmailed the US by saying if Washington does not do its bidding, it will turn to Moscow and Beijing. The smiling high-five between MBS and Putin recently in Argentina was a proverbial “atta boy” of mutual admiration between two ruthless leaders with poor human rights records.Saudi Arabia is going to be a major headache for the US in the years to come since there is no principled policy towards countries in the region from the US side except to shore-up ruthless strongmen.”

-Ebrahim Moosa is professor of Islamic studies in Notre Dame’s Keough School of Global Affairs and Department of History. Professor Moosa is available for phone, email or broadcast interviews. Notre Dame has a state-of-the-art studio on campus.

Moosa co-directs, with Scott Appleby and Atalia Omer, Contending Modernities, the global research and education initiative examining the interaction among Catholic, Muslim, and other religious and secular forces in the world.

Moosa’s interests span both classical and modern Islamic thought with a special focus on Islamic law, history, ethics and theology. His book What Is a Madrasa? was published in 2015 by the University of North Carolina Press. Moosa also is the author of Ghazali and the Poetics of Imagination, winner of the American Academy of Religion’s Best First Book in the History of Religions (2006) and editor of the last manuscript of the late Professor Fazlur Rahman, Revival and Reform in Islam: A Study of Islamic Fundamentalism. He also authored Islam in the Modern World(Routledge, 2014).