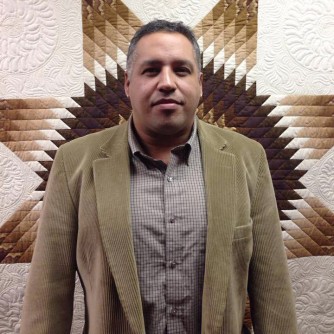 Cultural anthropologist Richard Meyers is the tribal relations director and program coordinator for the American Indian Studies program at South Dakota State University and a member of the Oglala Sioux tribe. He visited the Dakota Access protest site Oct. 27 and can offer insights on the American Indian culture and the ideologies that inspire the water protectors.

Native Americans protesting the Dakota Access pipeline are in it for the long haul, according to Richard Meyers, tribal relations director and program coordinator for the American Indian Studies program at South Dakota State University. He is a cultural anthropologist, specializing in cognitive anthropology, ethnography and sociolinguistics.

Meyers visited the protest site Oct. 27 and can offer insights on the American Indian culture and the ideologies that inspire these “water protectors.” He earned his doctorate in anthropology from Arizona State University in 2008 doing his dissertation research at the Smithsonian Institution in Washington, D.C. He then worked for the U.S. Department of Interior’s Office of the Assistant Secretary for Indian Affairs as a writer and editor for four years.

“For the Nakota, Dakota and Lakota people, water is life,” said Meyers, who is an Oglala Sioux tribal member. “That interconnectedness with the land is inherent in the ceremonies and rites of Lakota culture.” Tribal officials fear that an oil spill could contaminate the Standing Rock Reservation’s water supply. Meyers spent portions of his childhood on the Pine Ridge and Rosebud Reservations in South Dakota, before moving with his family to Massachusetts. After earning a bachelor’s degree in anthropology from Amherst College in Massachusetts in 1997, Meyers came back to South Dakota. He spent a year as an administrator and teacher at Crazy Horse School in Wanblee, where he was once a student, before starting graduate school.

Meyers can be reached at [email protected]. (See contact information for logged-in reporters for phone number.) He is president of the Association of Indigenous Anthropologists and serves on the board of directors of the American Indian Studies Association, which is headquartered at Arizona State University.