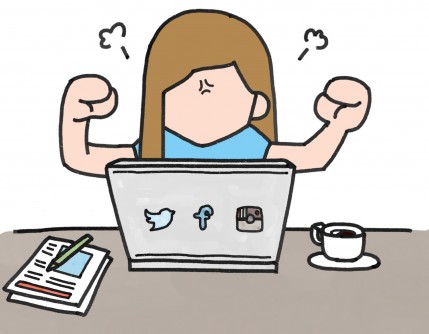 Schoolchildren huddled in Uvalde, Tex. classrooms as classmates and teachers are cut down by a rogue gunman. A peaceful weekend afternoon at a Buffalo, N.Y. grocery store interrupted by a white supremacist who sprays the aisles of elderly, predominantly African American weekend shoppers with an AR-15 style rifle.

Only five months into the year, these attacks tallied as the 198th and 214th U.S. mass shootings in 2022 alone — drawing heightened traffic from social media users who strongly voiced their frustrations regarding the nation’s ongoing gun violence crisis.

Mary Blankenship — a researcher with Brookings Mountain West at UNLV who studies the nexus of public policy and internet misinformation and disinformation — sifted through over 1.3 million tweets to examine how Twitter users’ emotions and reactions to both incidents varied and concurred based on political affiliation.

The verdict? Despite major differences of opinion on the motives behind and solutions to mass gun violence, right-leaning respondents who favor gun rights and left-leaning proponents of gun control are starting to converge in their belief that enough is enough and change is needed.

“Our analysis suggests that the emotional reactions to these horrific incidences of violence are not that far apart from each other,” wrote Blankenship and Brookings Institution co-author Carol Graham.

"The current discourse is overwhelmed with cynicism and pain that seems to unearth every associated injustice felt by right- and left-leaning users. Without compromise from both sides, no consensus is possible," they added. “We hope this analysis can provide an opening toward a solution where one did not seem to exist before.”

Additionally, unlike in earlier mass shootings that the researchers analyzed, there was almost no mention of religion or God in the Buffalo or Uvalde instances — signaling to analysts that both right- and left-leaning users are focused less on the shock of such tragedies and more on collective emotional trauma and concerns for public safety.

“There is consistency across both groups that gun violence is an issue that needs to be addressed,” the authors wrote. “While the main obstacle is the Republicans’ unequivocal refusal to discuss gun control, that refusal will not change unless Democrats show a willingness to compromise on the extent of restrictions and to accept that there are millions of people in the U.S. that are horrified by the violence but are not willing to give up their right to own guns.”

Blankenship continues to study the issue and said she was dismayed to see the same patterns emerge in wake of the recent Fourth of July mass shooting in Highland Park, Ill.

“On social media, alongside the panic and sorrow, came the same allegations of ‘whataboutism’ and wild speculations of the shooter’s identity and political beliefs,” Blankenship said. “These claims are not new and are often spread in high-profile cases, as seen in our research dating back to the 1 October shooting on the Las Vegas Strip.”

So, what happens now?

“If it’s anything like the previous shootings,” she said, “the online discourse will boil down to the same cynicism and accusations concerning the motives of the shooter and users of opposing views or tweets saying this can ‘never happen again,’ until the next time when it does – with the pain and cynicism burrowing deeper.”

“How cynicism and misinformation add to the emotional costs of gun violence” was published by the Brookings Institution on June 15.