New National Poll Shows Americans Distrust Congress, the Media, Hollywood, and Even Other Voters in the U.S. 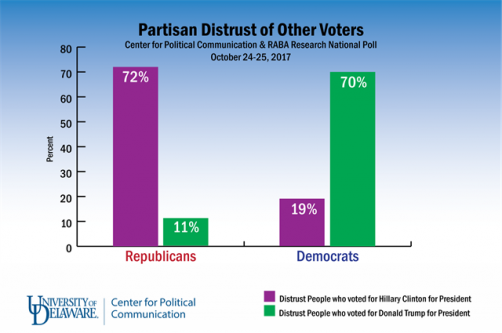 Newswise — In the second nationwide poll conducted for the University of Delaware’s Center for Political Communication (CPC) exploring the divides facing Americans today, a large majority of respondents carry a deep level of distrust for virtually every governing, media, and political institution in America.

In a list of questions gauging which American institutions are trusted, only the military gained a positive rating with 72% trusting and just 13% not.

Members of Congress unsurprisingly showed high levels of distrust; 44% of respondents reported they distrust Republicans in Congress, with 55% distrusting Democrats in Congress. But the rift runs beyond elected officials with only 37% of respondents trusting “people who voted for Hillary Clinton” and 37% trusting “people who voted for Donald Trump.”

Scoring rock-bottom is the media, with only 20% reporting they trust them, followed by the Hollywood industry with only 16%.

Trend lines are leaning toward increasing skepticism and distrust of what were once respected institutions as we witness a distinct tribalism becoming the new norm in American politics.

Interviews of 725 voters were conducted October 24-25, 2017, via automated phone survey. The results were weighted to ensure a proportional response. The margin of error for these results is +/- 3.6%. For questions on methodology, please email [email protected] or call 515-491-2722. The National Agenda Opinion Project is funded by the University of Delaware’s nonpartisan Center for Political Communication (CPC). This poll was conducted by RABA Research and supervised by the CPC’s Associate Director Lindsay Hoffman (Associate Professor) and Paul Brewer (Professor) in the Departments of Communication and Political Science & International Relations.